The Babel Tower of Overachieving

Sometimes, I feel like I’m building an enormous tower.

My building materials are not brick and bitumen, but all of the things I do every day. I make another to-do list, write another article, compose another tweet, and fill another moment of silence with the noise of all the doing I do.

Sometimes even the creative endeavors are transformed into hardened bricks of the tower I’m constructing. I make something new from yarn or flour. I read another book. I begin another project, just to place one more brick on the towering stack.

I fall into bed, exhausted. Building a tower that reaches into the heavens is a weary-making task.

I used to think the Tower of Babel was an ages-old story that began and ended in Genesis 11. Yet, the tower from that story seems to find its way into my own life story more often than I care to admit. It prods me onward, and I pick up my building tools again.

The Tower of Babel is a story of people struggling to name themselves, and they do it by trying to find their identity in their grand accomplishments.

The Tower of Babel is also a story of a people, who by their delusions of grandeur end up isolating themselves from God and from the rest of the world.

Isn’t that how overachieving works? 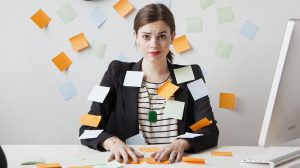 Lists and projects and tasks to be done are attempts to answer the questions: who am I? and why do I matter?

In the lists and projects and tasks to be done are attempts to answer the questions: who am I? and why do I matter? And the questions are asked out of a deep desire to be a part of something that makes a difference. But the answers are not in finding more to do. In a cruel twist, the overachiever ends up isolated from the meaning and belonging and identity she was attempting to find in the first place.

The tower building of overachieving begins with a false premise: if something is good, even more of that something is better. It was this premise that led the Pharisees to ensure they tithed even the smallest of herbs – like mint and rue. The burden of this religious legalism crushed many who sought after God, and even the Pharisees who insisted on stricter observance found themselves neglecting justice and love. Stricter observance did not equal deeper faith. Greater achievement could not answer the deepest question of all: Who am I?

Sometimes, I feel like I’m building an enormous tower of all the things I expect of myself. But, today I am taking the tower apart, one brick at a time. The most powerful tool of deconstruction is the tiny, yet neglected word “no.” I say “no” to the endless pursuit of tower building in order to say “yes” to the living springs of life.

We do not have to achieve a name for ourselves, we were given one before we had done anything to earn it

I say “no” to the endless hamster wheel of trying to find my identity in the stuff that I accomplish in order to say “yes” to the identity that is neither earned nor achieved – an identity we affirm whenever we baptize a child.

…for you Jesus came into the world; for you he died and conquered death; all this he did for you, little one, though you know nothing of it as yet. We love because God first loved us.

We do not have to achieve a name for ourselves, we were given one before we had done anything to earn it. The One who is Love looks at each one of us and names us Beloved.