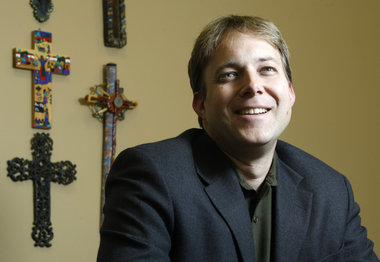 Seth Kaper-Dale is running for governor of New Jersey on the Green Party ticket. Along with his wife, Stephanie, Seth also serves as pastor the Reformed Church of Highland Park, New Jersey, a call they’ve shared since 2001.

Recently, I had a phone conversation with Seth. He told me that he grew up in Vermont, is a graduate of Hope College in Holland, Michigan and Princeton Theological Seminary, in Princeton, New Jersey. In between college and seminary, Seth and Stephanie lived in Ecuador for a year, an experience he calls “very formative.” Here is the bulk of our conversation:

SMV: Seth, talk a little bit about your experience. What is the core of the Gospel that inspires you and guides your ministry?

SKD: I don’t believe God sees everyone as equal. God has a preferential option for the oppressed. And theology is best when it is a reflection on praxis—and praxis is action on behalf of the oppressed. Shalom is ultimately for everybody, but until the day when ‘justice and peace embrace,’ God is going to take the side of the oppressed, and the church should, too.

I’ve lived my whole ministry with an eye toward what I call the ‘first tablet’ of the beatitudes—‘blessed are those who’ve had the spirit beaten out of them, for theirs is the Kingdom of God.’ That whole ‘tablet’ is very earthy and about now. The ‘second tablet’ is sort of ‘blessed are those who serve them, those who bust their tail on behalf of those who are last.’

Through that theological approach we’ve had some insanely successful social justice work. We now own 22 buildings and have 122 tenants. Our tenants are homeless veterans, people who have aged out of foster care, asylees, refugees, chronically homeless mentally ill adults, Rutgers students who started in jail. You have to meet a whole of criteria for ‘lastness’ to be eligible for our housing.

We’ve fought ferociously to keep families from being torn apart by ICE (Immigration and Customs Enforcement) under both the Bush and Obama administrations. Now we’re fighting back against Trump. We’ve just formed DIRE—Deportation and Immigration Response Equipo. It’s a rapid response team to run interference against ICE. It’s sort of like setting up a fire department or rescue squad, rushing to scenes of incidents—letting people know their rights, comforting them, making social media blasts about it. 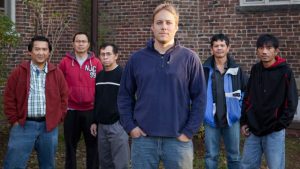 In the meantime, we’ve gone from a church of 35 white people to about 500 people with 44 nations represented by first-generation immigrants. There are about 3500 people in-and-out of our building every week. We run a wildly successful restaurant where all the chefs are refugees and asylees.

SMV: Your campaign motto is “The Last are First.” What does that mean for your campaign and potential governorship?

SKD: Bible readers will know, of course, that the second half of that phrase is ‘And the first shall be last.’ Sometimes I get critiqued that I’m pandering to the poor or ‘giving handouts.’ I say that I’m also about bringing down people from their thrones. I just didn’t put that in my tag line! Shalom doesn’t come from trickle-down, but when wells spring up. I’ve seen it many times.

My gifts are being both prophet and administrator. I’ve done it in the church and I believe I can do it at the state level too. I want to focus on issues that never get touched by candidates. In fact most of my focus is on people who can’t vote—people in jail, children, the undocumented, refugees, asylees, renters. These are the people I want to give airtime to. If you’re trans, you’re central to my campaign.

SMV: How did it come about that you would run? Why the Green Party?

SKD: About two years ago I thought Chris Christie (New Jersey’s current governor) was going to step down because he was running for president. If you’re going to be out of the state for 200 days a year, I thought you might give up your day job, but I was wrong.

Nonetheless, that’s when I started thinking about running. At the time I was thinking I would run as a Democrat. But watching the Bernie-Hillary run and the atrocious wheeling and dealing done to stymie Bernie’s far-superior message, I thought ‘If Bernie Sanders can’t be treated right by the Democratic Party, I’m never going to get anywhere here either.’

Then when Phil Murphy announced as a Democratic candidate—a Goldman Sachs guy who put $10 million of his own money into the campaign to get started—I thought I don’t need to play this game. They are so out of touch with the people.

SMV: How do you serve as a pastor and simultaneously run for governor? 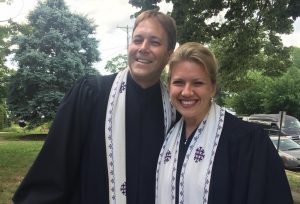 SKD: I do about 25 hours a week of church work. That means home visits and hospital visits and Bible study on Wednesday mornings and senior’s prayer group, various committees, singing in the choir, preaching twice a month.

I have six seminary interns that I oversee and they do a lot of good work. We have about 26 people working at the church in some capacity. A lot of hands help out, so I’m fortunate in that regard.

As the campaign grows, I will probably preach less. Stephanie and I have always shared one position and our goal is for her load not to increase during the campaign.

Most of the time, it’s okay. I sleep very little but that’s not very different from normal.

SMV: What is the reaction of your church? How do the people in your congregation feel about you running for governor? Even more broadly, what about the whole church and state question?

SKD: It’s been really interesting. I try super-hard not to talk about my campaign at church. There are some people from church who are very involved—canvassing, putting up yard signs, at events, that sort of thing. But except for a couple of minor times when people mentioned my campaign in worship there hasn’t really been any mixing of my campaign and Sunday worship. I don’t talk about the campaign at church.

About church and state, that’s really an interesting question. And it’s been treated so differently over time. The black church, for example—it would be weird if politicians didn’t show up in the pulpit in the weeks before Election Day. If the separation of church and state means ‘church, just keep talking about heaven and politicians will take care of earthly things,’ then we have a problem with our theology. The church should be mixed up in conversations about war, terrorism, security, immigration, incarceration, and all the rest. But as far as endorsements or direct partisan politics in church, it is wise to treat that all very delicately

SMV: How is the campaign going? What is your experience as a candidate like?

It’s exhausting and humbling. I’m busting my tail and still half the time when I’m being introduced they can’t pronounce my name! I’ve been a big fish in a little pond and now I’m a very little fish in a big pond.

I’m running against a guy who made $7.3 million last year without having a job! I’m up against a challenge. When he called the media to say he was releasing his tax returns, 50 reporters showed up and it was 400 pages thick. I thought I would try the same thing—to show $62,000 of family income and a tax return one page long. But nobody showed up to cover that! In some ways ‘The Last are First’ isn’t only about the people who I want to represent, it is about my campaign as well. 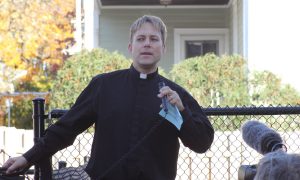 I want to put out some bold things that Democrats have to say ‘no’ to. My platform is getting more developed all the time, and the newer stuff hasn’t been put up on the website. I’m probably a few weeks out from putting forth an economic recovery plan for the state—one that isn’t about lowering taxes for the wealthiest but about putting real money in the hands of the poor so they can rebuild their neighborhoods and businesses. It is really difficult, for example, for a bodega to hire another employee when almost all its customers only have enough coins in their pocket to buy a candy bar. But if those people were earning $15 an hour, they would stop there for their eggs and milk. The whole neighborhood begins to change.

Of course, I’m no fan of Trump, but everything that’s been happening has really played to my strengths. I’m suddenly getting more media attention than Murphy, free publicity. The Wall Street Journal, NBC, Voice of America were all just recently at the church. We were on NPR’s Morning Edition last week. French TV and two New Jersey papers came when we rolled out DIRE (Deportation and Immigration Response Equipo ). Murphy and Democrats can’t talk about that sort of thing. Our church has such a history of providing sanctuary for immigrants that Trump’s executive order just brings the media to me. I’ve probably had twenty interviews in the last week. This is all good and we can just hope people will connect the dots between my work here as a pastor and my run for governor.

To learn more about Seth, his platform, and his candidacy, visit www.kaperdaleforgovernor.com/