Calvin and the Yanktons just across the river

Calvin and the Yanktons just across the river

Not far away, just across the road and the tracks and around the bend of the river a bit northeast of here, there’s a spot across the Floyd that’s only slightly higher than anything else around, a spot someone told me used to occasionally give up arrowheads and stone kitchen tools for grinding grain. Used to. All things must pass.

Such artifacts imply a once-upon-time indiginous camp, Yanktons probably, who roamed the region. I don’t know if all of that is accurate–I’ve never found an arrowhead up there above the bend; but that some Yanktons would choose that particular chunk of high ground is perfectly understandable if you stand there for any length of time. You can see a long ways, all the way to Orange City, almost four miles. Of course, Orange City wasn’t there when some Yankton band threw buffalo skins up against the poles that would form their tepees, built a fire, and determined to stay awhile.

Yes, I am hopelessly romantic. I like to think real ghosts are up there on that bend, that some morning if I walk out along the road and look east, I’ll see thin trails of smoke from a campfire or two or six. Fat chance, really–out here where I live, there’s always too much wind.

But what’s a life without imagination? So I keep it up. Lewis and Clark came up the Missouri and spotted their first herd of buffalo just about an hour west of here. Why not think of this ground as it might have been once upon a time 200 years ago, Yanktons for neighbors? We could do worse.

The sky is huge this morning, some remnant storm still passing away, flashes of orange at the horizon, below mounds of dark blue fleece. I’ll step out and get a picture. 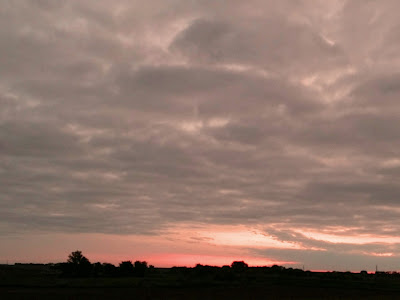 Okay, so it’s no stunner. Not all dawns are created equal, and out west, thick darkness is right now threatening more rain (we’ve had our share). Still, countless morning skies inspire me. I like to think–as the mythology goes–that those Yanktons up at the bend, were they here right now, would be sitting at the flaps of their tepees, looking east, welcoming the sun as if it were the triune God. It was a ritual, people say, a spiritual discipline, to begin the day like that.

You could do worse than establish a prayer life at the opening of the day, as thousands–even millions?–of Native people are thought to have done long before black-robed white folks came along toting their black books.

Is such ritual doable? I don’t think so. But then a week or so ago we visited a nephew who lives 33 floors up, mid-town Atlanta. We were there one sunny afternoon for an jaw-dropping view of the city. Great dawns–like great sunsets–must be incredible from up there, even though a couple million people live just below.

Calvin maintained that when we are moved by what we can of God’s immensity, we can’t help but simultaneously recognize our frailty, the inescapable truth that we simply are not what he is and therefore in great need of abundant grace. That realization, often experienced in nature, Calvin said, is the beginning of wisdom, We see something of his power and therefore understand our lack thereof. Just across the river from me, some Yanktons on some mornings like this may well have sat outside their doorways and noted the exact same thing. Whether it was the same God is something I’ll let theologians discuss, but certainly they must have experienced the same vital relationship.

In his new book American’s Original Sin, Jim Wallis makes the claim that our problems as a nation have just about everything to do with white America’s inability to make peace with its own past, a past that included treating ethnic and racial minorities as immaterial, as men and women and children who were simply not fully men and women and children. That iniquity, Wallis says, emphatically, is America’s “original sin.”

“If white Christians hope to build multiracial and multicultural communities of faith,” he says, after a long chapter that outlines ministries that do just that, “they must be prepared to listen to and include worldviews and technologies of nonwhites and non-Westerners.” And then this preposterous line: “That process can begin by recognizing that many non-Western expressions of Christian theology have just as much to teach us about God as Calvin, Luther, or German popes do.”

But then look at this: 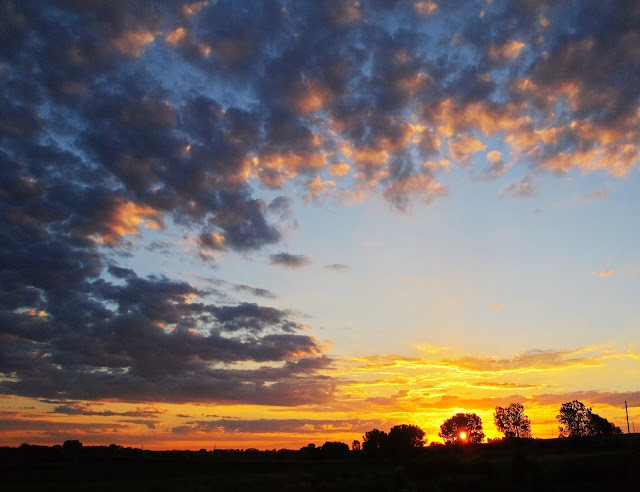 That bend in the river is just beyond those trees.