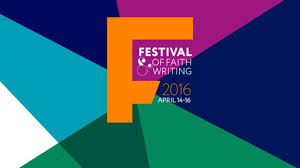 An art gallery downtown. Makoto Fujimura reads from The Four Quartets, testifies to what T.S. Eliot has meant to him. Tells of reading the poem aloud in the subway after 9/11. No one minded, he assures us. It was a way to climb back from despair. He speaks of the Chinese tradition of requiring government officials to master a body of poetry, the art of calligraphy, landscape painting. “Should our leaders be required to be able to create beauty?” he wonders.

An athletic arena, set up with folding chairs for a literary crowd. Before we know what’s happening, Tobias Wolff lures us into a short story about a woman lured into a bogus academic job interview. Witty satire turns bitter. In defiance of her own entrapment, the woman lectures on the cruelty of the Iroquois to the first French missionaries. Wolff describes his research on the missionaries in question. Their certainty, he says, is so impressive. And so dangerous. We must watch for the dangers of certainty. He is thinking of American politics.

The college chapel, two living room chairs where the pulpit usually stands. An interview with Zadie Smith. Smith, too, worries about certainty. Our knowledge is always “minute and partial,” she remarks. Nineteenth-century British writers, whom she loves—Jane Austen, George Eliot—were deeply judgmental of their characters. Smith observes that neither Austen nor Eliot had children. “The experience of having children thrusts you into uncertainty,” she observes.

A low-ceilinged auditorium, the kind with tiered seating and fluorescent lighting. Jaweed Kaleem and Marilyn Chandler McEntyre tell stories about sitting with the dying, listening to their stories, writing about it. When people recognize that they are facing their own death, says McEntyre, that can be for them “a curious moment of empowerment.” A person in the audience asks a question. Her own grief is still raw. She hasn’t been able to write her way toward meaning in her father’s sudden death. McEntyre quotes someone else: “You have to let things be before you make them mean.” Then she adds, “The book of Job is a good place to go for a refresher course in rage.”

A beautiful concert hall, the lights dimmed. Christian Wiman reads poems, songs in the darkness. A falcon lingers on a windowsill, a steamroller flattens a snake, a man serenades his wife as they flee Stalin’s soldiers. An irony of the writing life, Wiman remarks: “You feel most intensely the life you fail to feel.” I write it down though I don’t know what it means. The quote from Abraham Heschel I do understand: “Faith is mostly faithfulness to the times when we had faith.”

A conference center room, four panelists, all religion journalists. Patton Dodd sums up the situation: “American religion is in disarray. For religion writers it’s a cornucopia.” People are hungry to read about religion, they are hungry to speak about religion. No one can figure out a financial model to support religion reporting. And yet, says Dodd, “The world needs neutral, deeply engaged religious discourse.” The alternative is ignorance, prejudice, division.

The theater space, ready for next week’s production, a cabin in the woods, a treehouse, a firepit, painted grass. On the edge of the stage, two upholstered chairs. Tara Isabella Burton and Dean Nelson offer advice about travel writing. Look for a key metaphor, a key quote, find the story. Particulars, never generalities. Talk to people, tell them you’re a writer, let them tell you their stories. But watch their behavior, too. It might reveal something they’re not saying. Whatever you do, do not use the cliché, “East meets West.”

Back in the arena. George Saunders explains that he has been attending Trump rallies, working on a story for the New York Times. The audience murmurs. He places himself, he explains, where the river of Trump supporters sloshes against the bank of protesters. That’s where he stands and watches. People lob internetisms at each other. Writing fiction is his stay against despair, says Saunders. The attentiveness to specificity and complexity, the sharp and true observation, the yes and no, together. Wolff comes on stage for a conversation with Saunders. More living room furniture staged on a stage. They speak of the dangers of generalizations again, hiding our enmities in concepts and abstractions. “You can trace the poisons to the language,” says Wolff.

You can trace the antidotes to the language, too. Naming the world truly. Attending to its beauty. Embracing uncertainty. Listening to one another’s stories. Refusing the lazy generality, the dangerous truncation of mere concept. Instead, reveling in the particular. The yes and no and yes and no and yes.