Bernie and The Donald

Bernie and The Donald

It’s going to hurt me to say it. Honestly, it feels like a kick in the shins, a sharp stick in the eye, but I can’t help thinking that Bernie Sanders is really something of a Democratic Donald.  You have no idea how much pain I’m feeling having said that.

Okay, I’ll give you all that.

But you want to know why “Bernie” gets crowds like no one else on either side of the political divide? You want to understand why he plays to packed houses wherever he goes, even in northwest Iowa, where sometimes it seems there are more Republicans than confinement swine? He, like Donald, is not you’re standard slippery pol.

At a campaign stop in Sheldon last Friday, he drew a huge and hungry crowd–I’m guessing 250. They had to truck in chairs. I’m not kidding. Right here in the kingdom of Congressman Steve “calves-like-muskmelons” King, Bernie Sanders outdrew Ben Carson and Rand Paul and Bobby Jindal last week, each of whom stumped in a neighborhood more steeply GOP than any county in the nation.

You heard right–Bernie Sanders, a granola nut from godless Vermont, a Jewish Socialist, outdrew all three. Here. Sioux County, Iowa. Should have been in the NY Times–“10,000 in Madison, then 250 in Sioux County: Man Bites Dog.”

And I’ll tell you why. Maybe ten minutes into his stump, Bernie was already passionately engaged, circling the podium, hands out, cheap mike popping p’s like the Fourth of July. Behind him, this huge banner adorned with just one word “BERNIE,” slipped down from the wall like a closing curtain, leaving nothing up there but a B, an E, and a mess.

A couple of minions ran up immediately. The symbolism was embarrassing, as if the campaign was doomed from that very moment. Three interns did their best to pin it back up, but Bernie turned around and waved them off. “Just leave it,” he told him, then turned back to the crowd to finish the sentence he was spouting, something about banks and the rich and and the flat-lining American middle class. 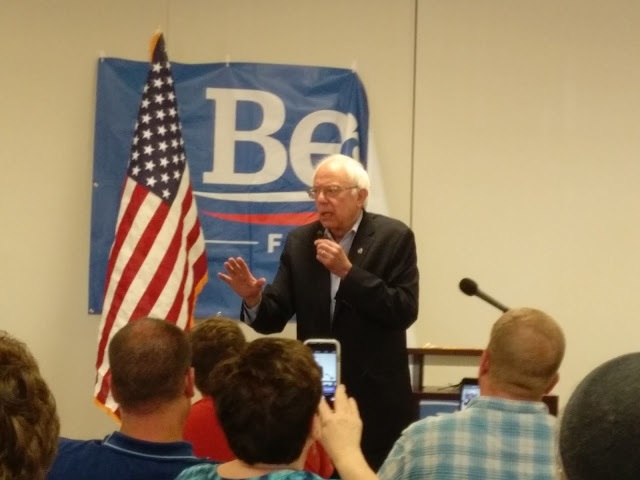 You gotta love him. Donald’s antics are fun too, but nobody loves him. There’s a difference.

And there’s more. Bernie doesn’t drip with attitude. If the Senate’s only Independent, a socialist from Vermont sporting a hard core Brooklyn accent, were arrogant, no one would have showed up at the Sheldon Community Center. Donald is as decadent as his hair. Bernie’s Archie Bunker hairdo looks as if it hasn’t seen a comb in months. He’s too busy to tease, to care.

Bernie knows very well he can’t win. He’s no dummy and he’s no billionaire’s sandwich board. I wonder if he isn’t himself shocked at his suddenly burgeoning campaign ledger. He’s not in the Presidential sweepstakes to raise his profile or fluff his vitae. He’s not hungry for an administration job if Hillary pulls this whole thing off. Bernie isn’t campaigning for Bernie. That’s a huge difference between Bernie and Trump.

What Sen. Bernie Sanders wants is the opportunity to air his views on a story people simply don’t know. He wants a cathedral door for his 96 theses. He wants to open a conversation with the people, he says, who are voting against their own best interests. The socialist in him insists on a demographic and economic reality that no Republican can deny: in America, the rich are getting richer and the poor, poorer, every single day.


Here’s what the Fed said in last year’s September report:

Across the distribution of families grouped by usual income, all but the highest quintile saw declines in median income between 2010 and 2013, with second and third quintiles seeing the largest declines (7 percent and 6 percent, respectively). Median income increased 2 percent for the top income decile. Mean income declined strongly for the bottom two quintiles and barely budged for those between the 40th and 90th percentiles, whereas the mean income of the top decile increased 10 percent between 2010 and 2013.

If people believe that, should they? That’s what he wants us to think about.

Bernie Sanders would love to be President, but he knows that he and Donald Trump have no chance. What he wants is the opportunity to preach the word the Federal Reserve says, to open a conversation about something called “justice.”

That’s why he turned to those interns and called them off that blasted fallen poster. Nobody came to Sheldon, Iowa, last Friday for a campaign banner, and only a few of the couple hundred who were there came because they believe that Bernie Sanders is bound for oval office glory.

Bernie Sanders draws crowds because it’s just plain exciting to see and hear a politician who doesn’t give a rat’s butt about a crumpling campaign sign, a man who’s got more on his mind and in his soul than buttons and banners. The only thing he’s selling is ideas.

Truth be told, he’s nothing at all like The Donald. There, I feel better.

Okay, they both got bad hair–that’s true. But The Donald cares about his doo.