Tintoretto had it right

Tintoretto had it right

I am no expert, no theologian, no art historian; but for what it’s worth, I think Tintoretto had it right because the scene must have been something akin to this mess, street clothes scattered everywhere, a kindly mutt right there in the middle of the melee. I’m thinking not even a savior could sit down and wash the feet of a dozen men in the shake of a lamb’s tail. Foot-washing–a fully expected ritual–has to take a while. If it was only a matter of a dusty foot baptized in a oaken bucket, the thing could have been over in 12 minutes or less and they could have got on to the important stuff, the meal.


But if the foot-washing was, as Christ claimed, a ritual symbol at the very heart of everything he’d tried to do and teach them about himself and grace, then his doing it had to be more than a slam dunk; he had to put his blessed hands on their pigpen feet, as he is in Tintoretto’s vision of things here (1548 or 1549). 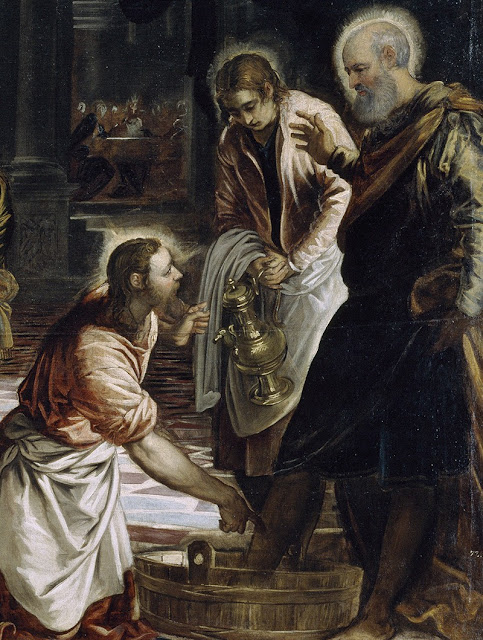 And the bald guy at the right has to be Peter, not only because he’s the subject in the John’s gospel, but also because he’s, well, Peter, a man born with a eye for the camera. No wonder some of them were wondering who was going to be greatest in the kingdom; in their sometimes unwashed present, Peter was forever grabbing headlines. The others must have been doing a little wishful thinking, assuming that “last should be first” and all of that, right? After all, he’d said it, Jesus had.  Talk amongst yourselves.

Right there in the middle of the work, one of the disciples, who in Tintoretto’s mind might well have been just another working stiff, is delivering a blue-robed disciple of his baked-on long johns–and it’s no picnic. Strangely enough, the image seems to dominate the whole painting, in part because the action is so seemingly fierce, comic even–and there it is at the heart. The two of them look as if they’re horsing around right there in Christ’s presence. Imagine that. 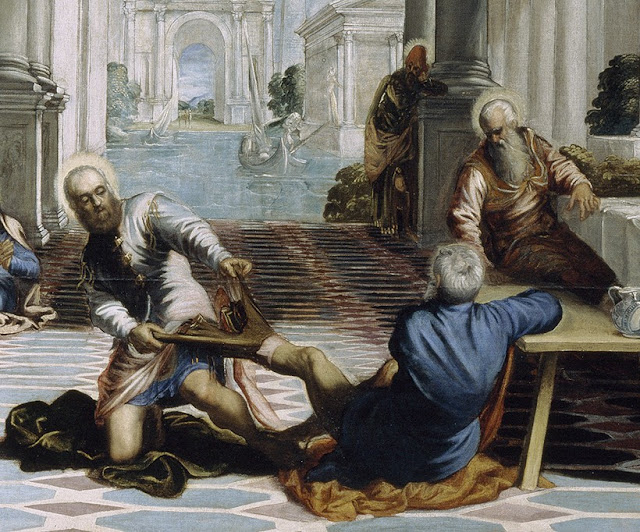 They must have been. Like I said, the ritual itself must have lasted a half hour. None of them could have shut up for all that time. They couldn’t have been talking about the Cubs; but what was the chatter for all that time, other than who was going to greatest in the kingdom? What a bunch of keystone cops. Seriously.

That’s why I think the foot-washing moment must have been something of a mess like this–and none of that characteristic Rembrandt forbidding darkness. The room is spacious, well lit, an almost heavenly swimming pool right out back, and some beautiful giant portals for all the natural light in the world. I think Tintoretto got it right.

The disciple in the orange-ish robe on the far left is probably there for visual effect alone, to balance the most important act depicted in the painting, which happens (obviously and somewhat uniquely) way out on the right. But who the Disciple Of the Orange Robe is isn’t clear to me, even though he’s obviously more serious about what Christ has just done to him (he seems to be redoing his sandals) than Laurel and Hardy up front.

And where’s Judas, that cursed scoundrel? My guess is that he’s the shadowy figure leaning up against the pillar in the background, a chap already clearly ill at ease among guys who, not that long ago, were fishing buddies. He’s dressed somewhat regally, but then he’s the guy with the vision, after all, not to mention a jingling pocket.

Our sermon last Sunday morn was based on the John passage, and it was just fine. But I found myself wondering how this whole ritual actually went down, how specifically Judas–look at him skulking at the edge of the room–must have behaved when it was his turn to get his feet scrubbed. What went on between him and the man he’d just sold into death?

Try to imagine that moment. Christ knows the score. He’s hinted as much without revealing everything. Still, the Lord of Heaven and Earth is perfectly mum on weekend plans, his hands in the water and on the vein-y feet of a honest-to-goodness reprobate who will, with his thirty pieces of silver, lend his name to human deceit for at least a couple of thousand years, this damned Judas.

How’d that scrubbing go in real life? Did Jesus stare him down? He really wasn’t into power or machismo. I can’t imagine anything was said because he’d already made clear that there was too much that couldn’t. When Christ had his hands on Judas’s feet, did he jerk them around a little, or was there absolutely no communication to suggest that he knew the scoundrel had already sold out? What did Judas surmise? Did he know that Jesus knew?

Or push it another level. Did Jesus know that Judas knew that he knew?  The drama here is surpassed only by the potential levels of unforgettable dramatic irony.

I’d just like to know what was said between them? What wasn’t? What could be? What couldn’t?

Could Jesus Christ the Son of God be deliberately deceptive? Can the Lord of Heaven and Earth give out cold shoulders? Maybe the two of them just talked shop, talked finances. Maybe it was all surface chatter. “Don’t get some rain and the crops are going to suffer–look at this dust!”  You know.

Maybe once it was over there was just one decidedly subtle wink.

I honestly couldn’t write that scene and Tintoretto couldn’t picture it either because sometimes Jesus Christ simply escapes me, the mystery of his unique being. Sometimes it’s amazing how much I don’t know about what we call the incarnation and how much I never will, as long as my feet too are thick with dirt.

I think Tintoretto had it right, but then what do I know? I certainly don’t get Jesus.

I’m just greatly thankful he gets me.