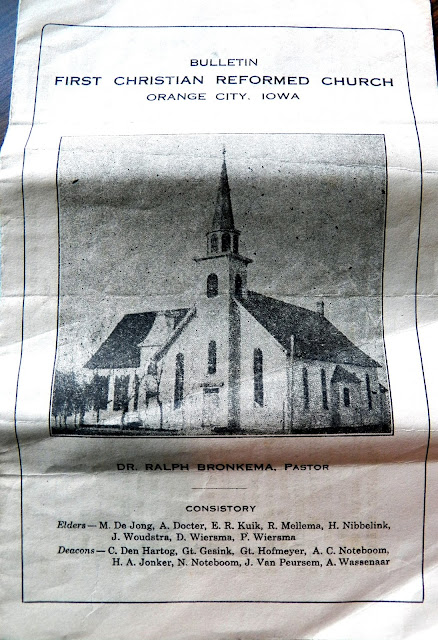 It arrived in the mail, a gift from my wife’s cousin, who found it while sifting through their aunt’s keepsakes–a bulletin from the First Christian Reformed Church, Orange City, Iowa, dated March 21, 1943.  There’s no order of worship, no ads for this or that activity, no reminders of anything other than “church stuff”–catechism, offering schedule, Men’s Society, and this: “Faith, Hope, and Love Circle studying from Lesson 13 in the December Calvinist.”

Subject:  Elijah calls down fire from heaven on the captains and their fifties [?], II Kings 1.

My wife’s cousin sent this old bit of memorabilia because of that announcement, and this:

“Randall Van Gelder and Richard Dykstra are home on a short furlough.  Farewell for them will be held tonite.  Both pastor and service director are glad that so many of our people take part in these farewells, and the boys appreciate them very much.”

I don’t think First CRC, Orange City, Iowa, had a worship committee, nor a Chair of the Worship Committee, nor a worship director; my guess is that the “service director” had nothing to do with special music–there wasn’t any–or liturgies or choral anthems.  It’s likely that “the service director” directed all the activities–including the farewells the boys loved so much–related to “the service,” the military, because the most incredible piece of information from this old bulletin is what appears on the back. Have a look for yourself.

Orange City is in Sioux County, Iowa, hundreds of miles northwest of the state capital in Des Moines, pure fly-over country, then and now.  Even Iowans, thousands of them, don’t know we exist here, so far, far away on blue highways, back then mostly gravel.  In 1943 there was nothing on-line, nary a TV, only WNAX, Yankton for the markets and the news.  This was the land of American Gothic, ethnic to a fault–the names on that list are a babble if your grandparents weren’t born in Holland.  Go ahead and take a shot. Half the bulletin is written in the Dutch language.

First CRC was much bigger back then, the only Christian Reformed Church in town.  And families were huge, farm families especially.  My father-in-law came from a farm family of ten.

Still, I can’t get my mind around the fact that in 1943 one church in one small town, way out in the corner of the state of Iowa, gave 35 “boys” to a war effort in Europe and the South Pacific.

Think of what your church would be like with 35 men gone to war, imagine what that would feel like. Just thinkn how different ordinary life would be, ordinary Sundays would be.  How does a church like that pray?  How much supplication is too much?  One of the notes on the bulletin says “Our Senator Gillette has promised to do all he can to gain certainty in regard to Marion De Vries.”  My wife says she believes he was captured.  He did return. Just imagine the prayer concerns.  They were legion.

Some boys didn’t return, among them Randall Van Gelder’s own brother Charles.

The year was 1943.  It’s quite likely the number of GIs First CRC gave to the war went higher still.  It would be more than a year till Normandy, two years until Hiroshima.

Sometimes we laugh at our pasts, understandably.  Sometimes we think of those days as the dark ages, and maybe they were.  But few churches these days can even begin to create an image of what they’d be like if 35 of their boys were men and gone.

Tragedy unites, someone once said; politics divide.  No one wants tragedy.  I don’t hope for war, ever. But this old church bulletin, half-English, half-Dutch, 70 years old, takes my breath away.

The morning sermon that Sabbath was based on Lords Day 41 and 42 of the Heidelburg Catechism: “Why Was He Also Buried.”  At night, Elijah calls down fire.

But my thanks this September morning are for this little crumpled gift, an ancient church bulletin and the straight-up sermon it still preaches about life and the Lord seventy-long years later.

Provincial, sure. But prayerful too, I’m sure, beyond what most any of us good church folks can know.