So I’m talking to this guy not long ago, a guy I’d just met, and he’s talking about the area, about who lives here and who lives there.  I’m listening, and it seems to me in the way he’s talking that it’s just one big happy family, which it sort of is, I guess, because then he says this to me:  “We’re all Alton Reformed guys,” as if Alton Reformed is a bowling team.

It isn’t, I guess, although what do I know?–maybe there is an Alton Reformed bowling team.

What I mean is, a church isn’t a bowling team.  At least that’s what I thought the moment he said it.  I thought it was an unusual way to explain these guys’ identity–“we’re all Alton Reformed guys,” as if they’re all members of the same country club.

Maybe it struck me as interesting because it’s not something I’d say–“you know, I’m a Covenant guy.”  I’ve never in my life used that language, not even in my imagination, which may well explain why on earth the “Alton Reformed guys” line hasn’t disappeared from my consciousness, why it’s suddenly, this Monday morning, being pounded out on a keyboard and flashing in front of me on the screen.

That was six weeks ago already, but that description has haunted me ever since because, doggone it, a church is not a bowling team. It’s a people who gather for worshiping the living God. It’s a people who share the body and blood of our Lord. It’s a people who believe themselves gifted by the same Holy Spirit.  A church is group of people who invest their faith in a God who cuts a swath through life they recognize and define collectively.  And death too.

But here’s what I’m thinking too–the church is no bowling team, but it dang well better be one too.

There is, after all, a social function to a church. A church needs to see eye-to-eye on important matters of definition.  It may well be a good thing if once in a while you can pick the members out of a crowd by the monogram on their shirts or the way they share a (root) beer after a ball game, by the shape of their belt buckles, by the way they wear their caps or whether or not they get together occasionally on Saturday nights as well as Sunday mornings.  A church definitely has a social function, and bowling together is always better than bowling alone.

Besides, if worship is a conversation between God and man, those who do it together better speak the same language–which doesn’t mean, by the way, that people who speak Spanish and English or Czech and Dutch can’t worship together. Still, you’ve got to admit that it’s pretty tough to be intimate if you don’t know the language. If you speak Cornish, but the guy beside you understands only his native Bulgarian, there won’t be many jokes.  Humor is little more than nuanced language after all, and where there is no nuance, there are no belly laughs.

If that’s true, then people in a church likely need to come to some agreement on the language they use to talk to God–the nature and shape of liturgy, for instance; the kind of public prayers they lift every Sunday; the music they use in praise; the style and substance of sermons; the icons they hang on their walls. All of that too is a language, the “language” of worship.

That “Alton Reformed guys” line stays with me because it begs questions, at least to me, that aren’t easily answered. A bowling team isn’t a church, but a church better be a bowling team.

If that makes sense.

Chapter two.  Out in Marty, South Dakota, a gorgeous Catholic church stands in the middle of a stretch of plains whose hills would hide the place if that cathedral didn’t have a gorgeous old European-style steeple. St. Paul’s isn’t really that old (1941), as cathedrals go, but it is remarkable.  There it is on the Yankton Sioux reservation, at the heart of it really.  There’s a boarding school just beyond the chapel and the BIA school across the street, and in the middle of it all is a big beautiful cathedral. 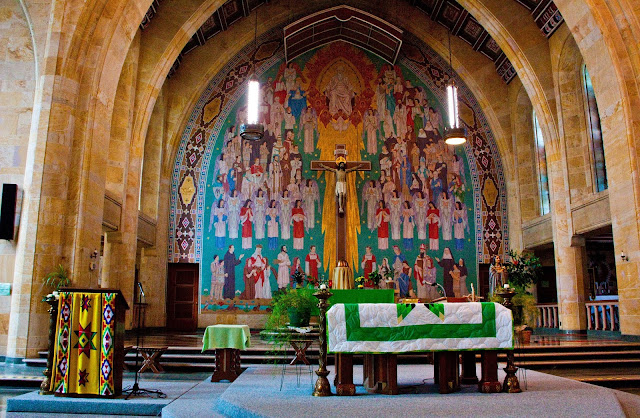 Its architectural design is universally Roman Catholic, but its accouterments are pure Native America, friendly ground if you’re Yankton Sioux. If that communion table up front were a sweat lodge, some might think the church to be a little too Native; but it’s hard to imagine some white guy or some red guy thinking that this sanctuary is somehow unChristian.

Here’s one of the stations of the cross. 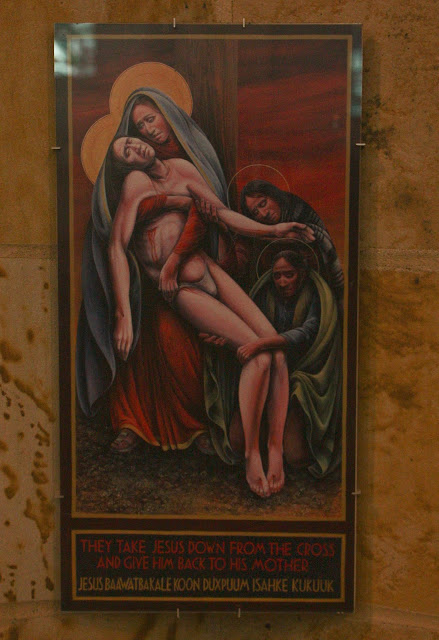 The women attending the Lord’s body, all saintly, are Native. The woman who might well be Mary, the one with her arms around the Lord’s chest, is lighter skinned.  The artist may have felt sheepish about making Mother Mary look Yankton Sioux, but the other two are unmistakably Native.

I asked one of the sisters, a woman who’d arrived at Marty, South Dakota, as an 18-year-old novice in 1960, whether a depiction like this would have been tolerated back then because I wondered whether giving Native Americans starring roles in the Easter drama was something new.

“When we got them,” she said, “some people didn’t like them at all.”

She shrugged her shoulders. “They didn’t like how naked he is,” she told me.

I’m sure my mother would have agreed with them, and she doesn’t know a Yankton from a Cherokee.

Churches will forever be, I suppose, both particular and universal, both worshiping bodies and bowling teams.  No worshiper at St. Paul’s was bothered by the Native setting to the Easter story, but some, she said, thought that mostly naked Jesus went a little too far. It wasn’t their particularity (their being Yanktons) that got in the way, it was something that probably shared with a ton of others, like my mother, who weren’t or aren’t Native–just a little squeamish about all that skin.

Could I worship in St. Paul’s Catholic church? Sure.

Would I feel comfortable talking to God in the language of the sanctuary?

Honestly?  For a long, long time?

Hey, listen–I’m a Calvinist.  Read the monogram on my bowling shirt.