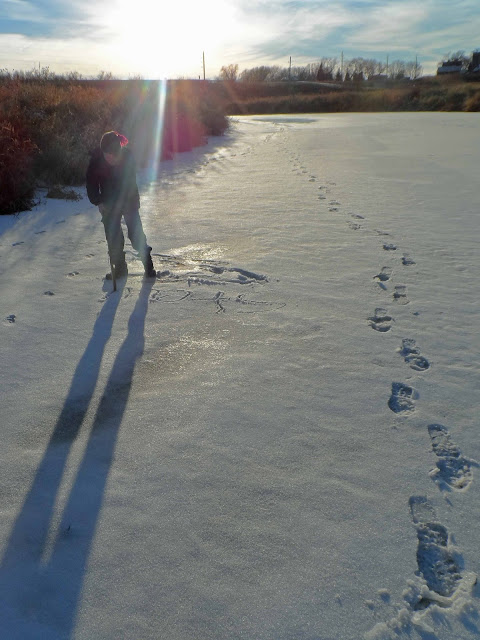 This is yesterday afternoon, a gorgeous February Sabbath, and that’s my grandson writing a message in the light snow on the Floyd River with the butt of his Daisy Red Ryder BB gun (it was–I checked–uncocked).

I like this picture because this Calvinist is given to believe that life offers an unending series or moral lessons created for us by a good and loving lord who can be, for our own good, something of a scold.

Yesterday afternoon I was working–yes, on the Sabbath–trying to determine what to say at an after-church study of the history of the denomination, pouring over the book, doing lesson plans.  I’m the fearless leader.

Now it’s my wife’s idea to allow one grandchild to stay behind when the family leaves after Sunday dinner, and they love it.  Yesterday, it was our grandson, a fourth grader. He wanted to get a favorite old blanket of his fixed, and his grandma has a sewing machine.  Grandma thought Super Bowl Sunday would be a good time to teach him to sew.

It was late when they finished and I wasn’t done preparing, but I’d told him to bring his boots and the afternoon was beautiful.  His BB gun is here on almost permanent loan, so I told him to bring it along to shoot at stuff.  I was a boy once too.

We tramped through the woods, stopping occasionally to pop a tree or two or a puddle of water on the  frozen river. Grandma and Grandpa had planned on church at night, a series on the Heidelberg Catechism, but twice while we were out there, he or I dropped one of his gloves and twice we had to backtrack into the woods and up the river to find it, both times him muttering, “My mom’s going to kill me–my mom’s going to kill me.”  He’s talking about my daughter, and I’m thinking he’d live. And, it was partly his grandpa’s fault.

Backtracking cost us time we didn’t have, and in my psyche I was still preparing to lead Bible study.  We’re out there in the gorgeous late afternoon, and I’m thinking about what needs to be said about the history of the CRC.

On the way back we hiked right up the river, on the river, when and where I took this shot. He said we were going to break through the ice, but last week’s temps were awful, even for January.

When we got back to the house, it was 5:30, and he still had to be brought home.  Church was happening all right, but without us.

Much, much later, couples club over, I took the card out of the camera and pulled up a couple of pictures of him–and us–along the river.

This is one. This one stopped me.

I’m too much a Calvinist to make claims for hearing directly from the voice of God. He doesn’t speak to me in fervent whispers or midnight dreams. Sometimes I wish he would or I’d hear.

And really, there’s no accounting for taste.  But still, this sweet pic just jumped off the screen. It’s the kind of image you can’t turn away from quickly, line and light and character holding your eyes:  the broad and bright river landscape, the endless mid-winter shadow, the run of my own footprints like something unfinished, and the way the lens turned prism to spread a splashy, bright rainbow over his shoulder.

Here’s what I’m thinking.  God the scold was reminding me that this was Sabbath too.  I was worried about getting to church and leading a couple’s club–good night, I’m almost a saint.  But at that very moment, I wasn’t at all in the moment.  I was out there on the river, but I was busy.

See that iridescence hovering over my grandson’s shoulder?–that’s God’s own voice.

Go ahead. Call me Pentecostal.