By Thomas Goodhart February 7, 2013 No Comments

I was having a bad afternoon.

One day last week while running errands, doing visits, and culminating in some long put-off grocery shopping it seemed as though the vast majority of humanity—at least, of which I was encountering—was in cahoots to foul up my life by getting in my way, going slow, and doing otherwise stupid activity with no other seeming goal than to perturb me. I was in a bad mood. And being behind the wheel during a portion of this time would not generally contribute to alleviating my sour disposition. But then while driving through Bed-Stuy, Brooklyn almost home and done with this draining day, a segment on that evening’s All Things Considered broke me out of my cranky-pants attitude. Lead by the velvety voices of NPR hosts, Melissa Block and Audie Cornish I was helped to see the light. And discover something new about dung beetles. 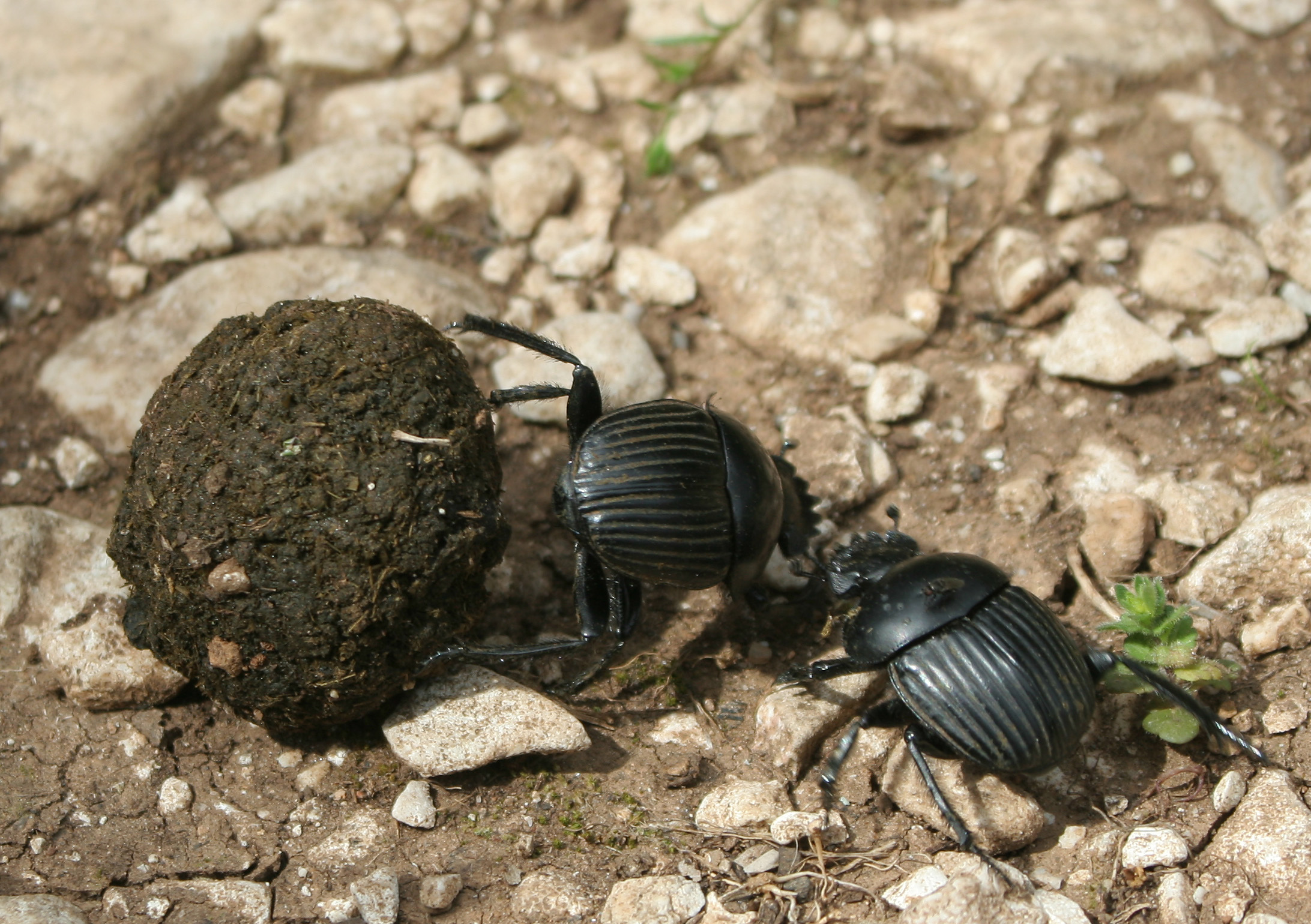 basically says it: they are beetles involved with dung. The unsung heroes in nature’s sanitation management, these little marvels (and sometimes not so little) consist entirely or almost entirely on the waste—excrement, feces, manure, dung—of other creature. Some of these beetles are known to actually move into the pile of poo and set up home there. Others specialize in burying their bounty in tunnels. And others, after discovering an abundant food sources, will take their prize by shaping it into neat little spheres and rolling it away. It was this kind of dung beetle that the NPR report was on.

Eric Warrant, an Australian zoology professor teaching in Sweden has been studying a species of dessert dung beetles, particularly their navigational skills. As one might surmise, certain nutritional resources can be especially scarce in the dessert environment. To a dung beetle, a fresh pile of feces is banquet feast in a hungry community, thus it becomes a highly competitive situation. Onto, or rather, into the pile, many beetles contend to get their portion of the poo first and to get home safely. Not only must they battle other beetles for their supper—and battles do indeed break out fighting to get dung—they must also watch out for the ever present lazy dung beetles who lay in wait until the best balls of dung are portioned out and who then try to steel it from the more enterprising beetle. The most effective strategy is to get to the new pile quickly, get your poo balled up, and get out of there as fast as you can.

And this is what Professor Warrant has been studying: in wasting neither precious time nor loosing their haul of feces, how do dung beetles navigate the most direct path or strait line from the dung heap to their homes? It turns out, by looking towards the heavens. The dung beetles—the particular species studied lives on the edge of the Kalahari dessert and works nocturnally in the night—use the stars of the Milky Way as a kind of compass to guide them onto the most direct path. It has long been known that certain animals use the sun and moon as navigational aids, but the dung beetles work on moonless nights. So how do they do that? The scientist made little paper hats for the beetles, basically blindfolding their eyes in an upward direction. When they did that, the beetles literally rolled their poo in circles and could no longer navigate straight. Remove the hats, however, and the beetles were back to direct routes. In further studies, the scientist placed the beetles in a planetarium, altered the stars in the sky and again, the beetles could not navigate correctly. But when the Milky Way was projected, the dung beetles got their grove back.

Now, perhaps you don’t find dung beetles and their navigational skills nearly as fascinating as I do. That’s cool. But one nonetheless has to celebrate the intricacies of the universe. I think it should also give us pause as it relates to the losses we suffer as humanity that is still very much created and evolved as part of the natural world we dwell in and are a part of. And here I mean the loss of that natural world itself, or of us having our bearings in it. Because sometimes I too feel like a dung beetle whose vision of the heavens have been marred and I can’t find my way home and am running in circles instead.

We live in a world and in such a way that many of the natural parts of life from other biological creatures and ecological relationship to climate and seasons are altered, affected, or spoiled in such a way that we loose our bearings. This past weekend in the New York Times was a beautiful report on a project that the French photographer Thierry Cohen has assembled by taking various photos of cityscapes from around the world and matching them via latitudinal positioning coordinates to night skies as seen from similar rural locals. Something that is almost entirely impossible to actually experience because of the severe light pollution that our urban environments produce is made visible in his work of art. Go to the site and see what New York City or Tokyo or São Paulo or Hong Kong would look like if one could view the night sky there. It’s beautiful. And it also makes me wonder what we are missing.

I’m no Luddite. I’m simply saying that there are a variety of ways of not seeing and of missing out that which we are present to. I’m thinking of that especially as we approach this Transfiguration Sunday when Jesus takes the disciples away onto a mountain and they see something that they were missing while down in the valley.

How often does that happen?