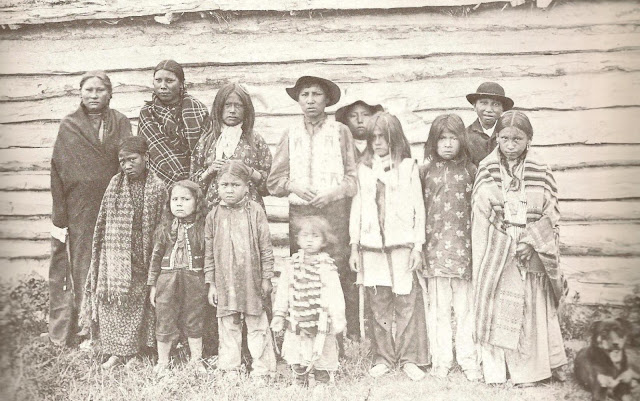 I showed them this old picture, something the turn-of-the century on the Rosebud, most of the kids outfitted in blankets, traditional garb.  We talked about it for a while, about their blankets and whether the people weaved them or traded for them.  They noticed that there was a white man’s wall behind them, not buffalo hides over teepee poles, no teepee at all. They wondered about what happened to the teepees.

They are fourth-graders, just old enough to entertain their own notions about things without departing too far from the ways their parents have plotted. They’re kids, children. They’re not independent thinkers, but I told myself that their being 9 or 10 doesn’t mean they don’t think.  I was standing in front of their classes because I was considered the expert on Native America, and the entire fourth grade was studying Native America.

So I put a bunch of photos of the Brule people up in front of them, if for no other reason than the Brule Lakotas occupy Rosebud, the reservation closest to the ground on which we were standing.  I didn’t have old pictures of the Yanktons, who would likely have thrown up their teepees right here along the Floyd.  I wanted the kids to see the very people we may have displaced when their own ancestors (and mine) left Holland or Pella and cut out homes on a prairie they simply assumed was theirs for the taking.

And then I showed them this picture, a little exercise in compare/contrast. 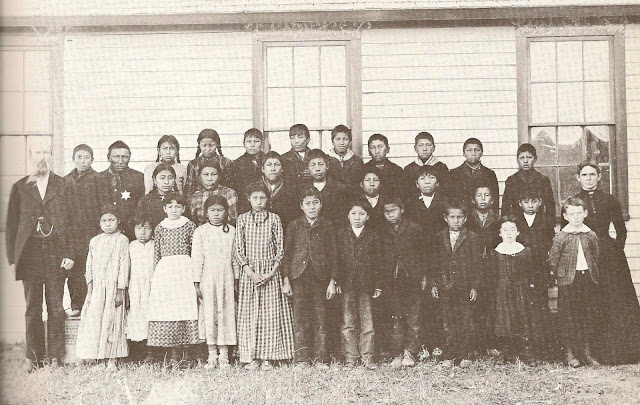 “What’s the difference? I asked them.  “Look closely.”

Did I mention they were perfectly darling all morning, lost in every image, rapt by every story, loving every word.  “These are kids too?–but in this picture, what’s the difference?”

Two dozen hands shoot up, a good third of the kids in the room, so many it was impossible to pick someone easily.  I point at a little girl whose interest is so piqued she might well have forgotten her name.  “These kids are dressed nice,” she said.

Did I mention they’re fourth graders?

“These kids are dressed nice,” the little girl said.

And for a moment I as tongue-tied as I’ve ever been. How do you tell a child there’s a whole lot that isn’t at all nice about this picture?

“They’re dressed white,” I said, smilingly.  I don’t think a one of them understood.

I tried more:  the boys have short hair, the girls wear dresses and aprons, and they all look like white kids, I told them.

I told them those white teachers wouldn’t let the kids speak their own language because they wanted the children to be white instead of red, and those darling fourth-graders looked at me, just as smilingly, as if they were on the edge of their seats for more–“Just keep telling us good stories,” their eyes said. “Mr. Schaap, just tell us more.  Tell us again how the warriors ate the buffalo’s heart raw.”

They were only fourth graders, and try as I might, I don’t think they would have understood the Great Sioux Wars that happened just north and west of our neighborhood.

And when I left school yesterday morning, even though I didn’t get across what I would have liked to, still I was thankful for having had the opportunity to say something at least, something is, after all, so much better than nothing.