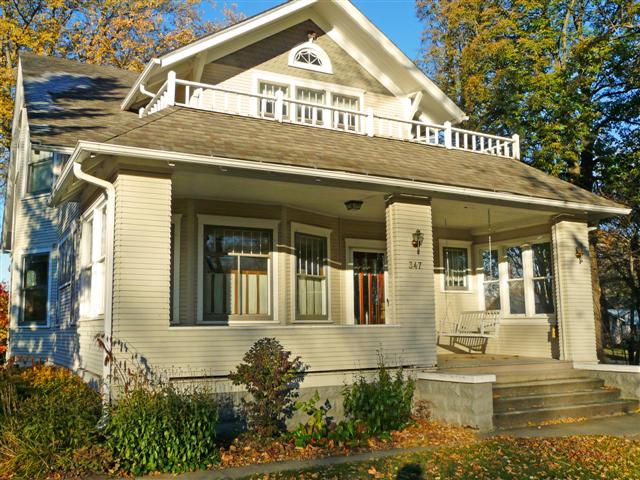 My wife, who’s now retired and therefore been home more often these days than she’s been in the 25 years we’ve lived in this old house, claims there’s one gorgeous female cardinal in a bush just off the deck that wants in to this house, keeps trying to break in through the window. But the place is not for sale, not yet anyway. I’m no expert on cardinal behavior, but it’s likely, I suppose, that she simply sees her own glamorous image in the window and takes off after it, as if it were altogether too worthy competition.

But I rather like the idea that she actually wants to get in and live here. We do own a beautiful house, after all.  It’s not one bit ostentatious for it’s age; plenty of old houses like this have baroque accoutrements–turrets and brick-a-brack. This one is big, but quite primly Dutch Reformed, even a skosh Puritanical, despite its size. It’s a plain old very nice house.

A woman wrote me a week ago and asked for pictures of it. Her father, now deceased, was born here, the son of the town’ first veterinarian, who had it built. Her father treasured this place, showed up one day years ago, I remember, children and grandchildren in tow, marched up on the front porch, knocked on the door, and explained to my wife and me that this was his own beloved boyhood home. I marched them through the house even though the place was hardly primped up for guests. Big deal. He was more than thrilled.

The woman, his daughter, remembered that spur-of-the-moment tour, remembered her father’s glee as he moved from beloved room to beloved room. She asked me to take some pictures for her, including her father’s initials in the front sidewalk and the barn wall, where, mid-Depression, he painted them–“E. J. 2315.”

The place has some history.  We’ve got what people here call a “town barn,” including a manger at the head of the stall where old Doc Jongewaard used to keep his horses.  And there’s a two-holer out back too in the corner–long out of use so don’t get any goofy ideas.

It won’t be long and the fourth family to live here–Jongewaard, Beimers, Huisman, Schaap–will leave this old house. There’s likely some actuary somewhere who knows the mean time that people live in a dwelling these days, but I’m betting we’ve been here longer than most homeowners stay in their houses–25 years this year.

No matter. I’m betting that if these walls could talk, they’d shrug because I’m quite sure ye olde deed to the place makes clear that this very year–now rolling on to a close–is the house’s own 100th.

A century old, and still proud, I’m sure. That pretty cardinal wants in anyway.

Right there in the room where, every night, my wife and I watch the news–well, Jon Stewart’s version thereof–a woman died, that old man’s mother, who was then the sole resident. If I’m not mistaken, E. J. himself was born here, in the house. When sometime soon we move out, this place will bid us goodbye and brace up for change. Maybe they’ll be kids around again–I bet these walls are wishing for some squirts to liven up the place.  My wife and I are pretty boring, and the cat is older than we are.

I don’t know that we’ll leave any lasting memories here. No births here during our term of office, and, thank the Lord, no one died. But then, we’re not gone yet, so who knows? But I’d bet against it.

What will these walls remember from the quarter century the Schaaps lived here? Not much really–no death, no birth, just life, I guess.

Just life, but a good one, so good that beautiful cardinal wants in.

I really don’t know what all of this means except I’m just thankful for the 100-year old place that put up with us for the last quarter century.  And thankful too for a persistent cardinal mom who makes it perfectly clear to us that what we’ve had here was something good really, a home.