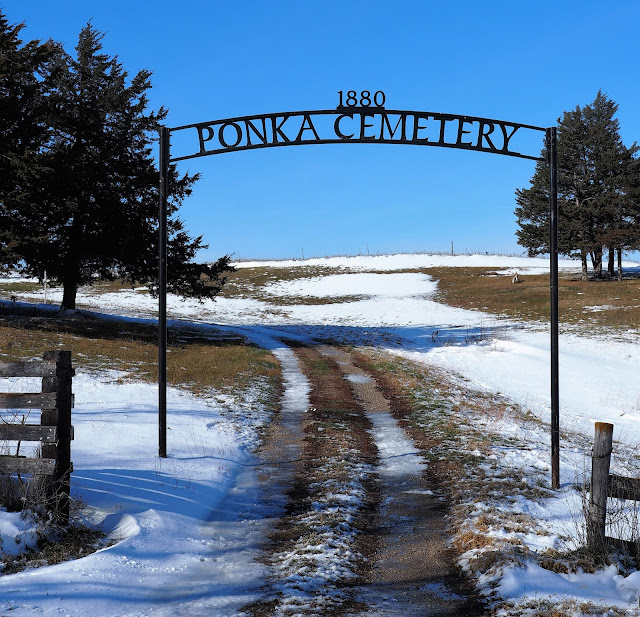 I don’t mean this to sound like a “dance macabre,” an old late-medieval allegory of death. I swear it wasn’t. Don’t think of that Saturday morning as a dirge. Far from it, even though what I have to show for it is an dour parade of monuments.

The cemetery I wanted to visit sits high above the mouth of the Niobrara River. I knew ahead of time that neither the grave of Standing Bear (the first Native man or woman the white man’s court declared human), nor his son (who wanted his remains returned to the land of his ancestors and prompted the Ponca’s long walk) are marked.

No matter. You stand up there above the confluence of those two rivers, and you just know Standing Bear and his boy are there, where they both wanted so badly to be.

Ancient ritual and customs festoon Native cemeteries with things for the dead to enjoy in the life hereafter, all kinds of things. Even so, the figurine up front here–actually behind the close stone–is Roman Catholic. But then syncretism is far less a sin among Native people than it was or is to the enrobed folks who first brought the Book out here.

Beyond (see it?) is the broad Missouri River and its abundant hills.

If you turned west that morning, buffalo roamed. I’m not making this up.

If I’d simply spent an hour or so wandering in that graveyard, I’d have already seen enough to make the trip west worthwhile; but I’d only just arrived. One stone I wanted to revisit, a place where thirteen years ago some proud ritual must have taken place, attended, I’d guess, by hundreds. Must have been a drum or two, some singing, some Ponca, some Pawnee. Still, the inscription begins “Our Father in Heaven.”

Stories haunt the place, as they do in any cemetery.

Back down the hill, I found Buffalo Chip. Couldn’t help but smile at the poor old chief’s name. It took me a couple of days to trace down his story, even though lots of his life stories are there in the space between dates of his birth and death.

Back in town, I stopped for a sign along the highway.

Three brothers from rural Niobrara, Nebraska, died together in June of 1969, when an Australian aircraft carrier collided with an American destroyer, cutting that destroyer in half and sending 74 American sailors to their deaths, including these three Sage brothers from right here, rural Nebraska.

The Standing Bear Bridge links Nebraska to South Dakota. I had to walk back a ways to get some shots of the river’s deftly carved sandstone.

Up there on the ridge, two makeshift, snow-covered memorials right at the precipice remember deaths I couldn’t help thinking might have been suicides.

Not so far up the road, I stopped at a pioneer cemetery, same date, 1880, as the Ponca graveyard.

Once upon a time a colony of Dutch Reformed, my tribe, put down roots and left a graveyard–no Buffalo Chips or Standing Bears; nothing but Boschmas and Wynias and Talsmas.

Once I wrote the story of a woman who lived out here during the Depression, a grand old grandma who remembered the Dust Bowl, who’d given birth to all her children out here at home, once alone, and, each time gone back to work a couple hours afterward. She lost a son in World War II–he’s probably buried here. She left South Dakota when her kids established lives elsewhere. But when I remember her telling her story, it’s only right to say that she took some of this Great Plains world with her.

I ate an Indian taco at Ft. Randall Casino, got back in the car and went west across the river to the the fort’s old cemetery, where there are more stories–like this one: the Dezaires, an American family: a mixed blood Army scout and translator married to an African-American woman, both buried here, beside their child. Someone somewhere, maybe, has the names written in a family tree. I hope so.

And this one, Lawrence Nugent, who died in July of 1871. The roll just outside the gate attributes his death to suicide. Stand there some time and you just can’t help imagining.

Then I turned east and went home. I know, I know–the whole processional sounds like a dance with death, but it wasn’t. Not at all. It was a great day. Really was. I learned a lot. Really did.

My Siouxland dance macabre was an exercise not so much in death as in life. “Stories make us more alive,” Madeleine L’Engle once wrote, “more human, more courageous, more loving.”