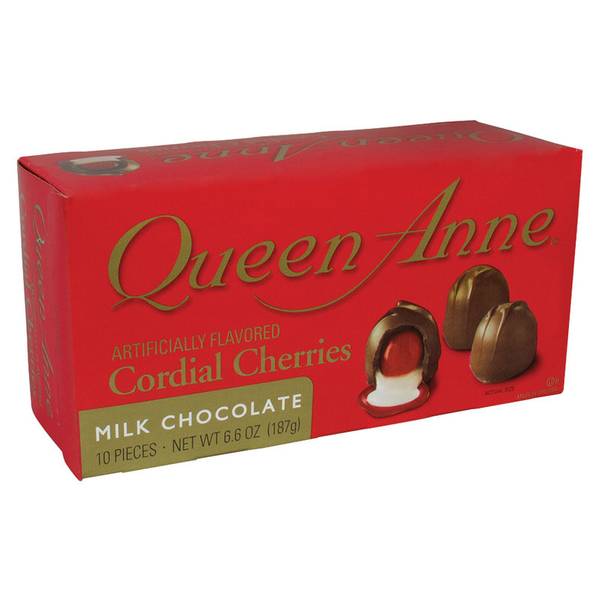 I forgot to buy a box of Queen Anne’s cordial cherries this year.

I didn’t realize it until the week before Christmas, and by then I was sure most stores were already sold out. I was sitting on the couch next to the Christmas tree when it dawned on me that I had never picked up a box.

It may not seem like much of a big thing to have forgotten, but I have made a box of cordial cherries my first purchase after Thanksgiving for almost twenty years. I think I forgot because I haven’t been inside a grocery store for a long time, either that or because I have a hard time remembering everything that needs doing right now.

When my husband and I were newly married, we began the tradition of driving from his parents’ home in Illinois to my parents’ home in Colorado. Every year, as we made the long trip, we would stop at my grandpa’s house along the way. Grandpa would sit in his brown chair, and we would sit on the couch, with his favorite western movies playing on the television in the background. My grandpa would listen as we told him what was new in our lives. He wasn’t much of a talker himself, but there was no doubt in my mind that he was listening and that he was so glad we were there.

On one of those first Christmas visits, I noticed a box of cordial cherries on his counter. As we talked, I learned that he looked forward to them every Christmas. I decided in that moment that I would make sure he got a box every year in early December.

The Christmas after my grandpa died, I struggled to hold back the tears in the grocery store when I passed the display of cordial cherries for the first time. I bought a box even though I knew I couldn’t send them to him. I brought them home, opened the plastic wrapping, and I couldn’t keep the tears from flowing. For a brief moment, it was like I was sharing the cordial cherries with Grandpa again, despite the ache in my heart.

I have continued buying a box of cordial cherries every year, even though my husband and kids don’t care for them. I put the box on a shelf in my pantry, and I sneak a cordial cherry now and then throughout the month of December — special moments for remembrance sprinkled throughout an otherwise busy and joyful season.

In addition to all of the losses of 2020 — loss of routine, loss of my in-person worshiping body, loss of a good night’s rest — I also lost my grandpa on the other side of my family, and I lost my great uncle. Somehow, in the midst of all of these griefs, I forgot to buy the cordial cherries. I forgot to sneak them from the pantry when no one was paying any attention. I forgot to pause and let both the sorrow and the joy take my breath away. I forgot to begin the Advent season with both the anticipation of the joy to come and the expression of the hurts in need of mending.

At first, when I realized I had forgotten to buy that box of cordial cherries, I tried to smile through the hurt. It seemed like such a 2020 thing to have happened. I decided I wasn’t going to let it bother me. I think about my grandpa all throughout the year, and I don’t need a box of cordial cherries to make it possible.

Then, just a couple of nights ago, I woke up in the middle of the night thinking about seeing the box of cordial cherries on Grandpa’s counter top. I could hear the clank of the knocker on his front door as I pulled the door shut behind me as I entered his house. I could hear him call me “baby doll,” and I could feel his warm, welcoming embrace.

2020 may have made me forget my tradition, but it couldn’t keep me from remembering why the tradition began in the first place. Grandpa and I might have shared cordial cherries for all those years, but we also shared a bond that even a global pandemic can’t undo.