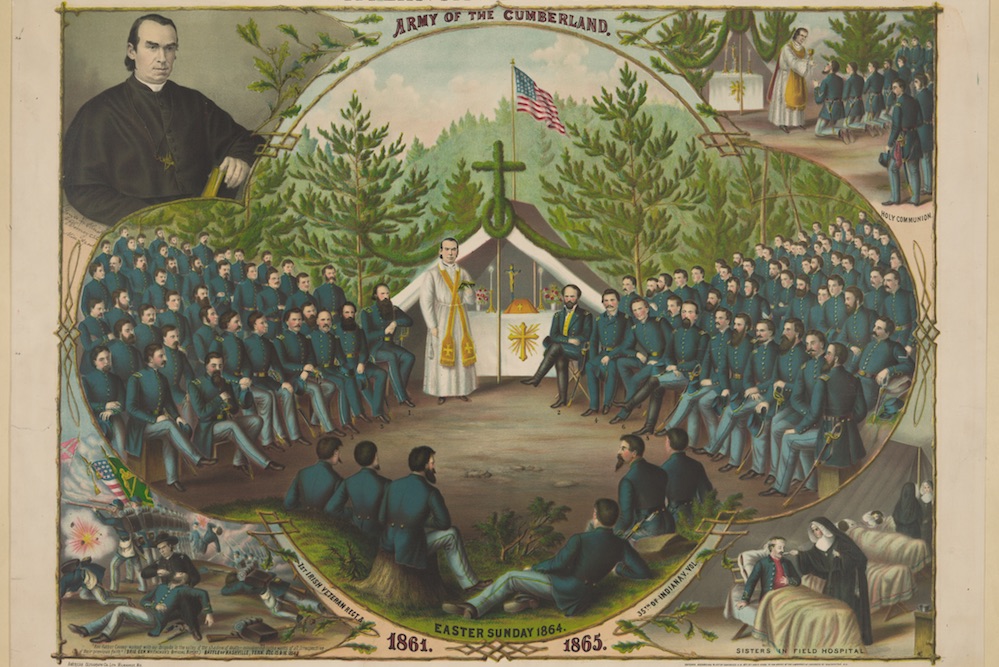 Last week we received a postcard in the church mail. No sender, no note – just this image on the front and our church address on the back.

If you can’t see it clearly, it’s a photo of men holding automatic weapons, American flags, and “End the Lockdown” signs, standing on the front steps of Michigan’s capitol building.

Below the photo are the words, “Onward Christian Soldiers.”

Now, having moved somewhat past the indignation (okay, fury) at receiving such a postcard, and anonymously to boot, I’ve spent some time thinking about the particulars of this card.

The hymn “Onward Christian Soldiers” was written in 1865 by the English Anglican priest Sabine Baring-Gould, to be sung by children in a Pentecost procession as they marched from one village to another.

The background info from the Psalter Hymnal Handbook notes that the militaristic language, while stemming from texts like Ephesians 6, also points to a more troubling sense of triumphalism, particularly apparent in the context of nineteenth century British imperialism.

That same language was being used across the pond in late nineteenth century America, riddled as it was by the Civil War. And as I thought about this card and the language of triumphalism, I remembered something I had read about the Civil War in one of Jim Bratt’s American Religious history courses at Calvin.

In chapter five of his book The Civil War as a Theological Crisis, historian Mark Noll talks about the problem of providence amongst Civil War era Christians. The problem, states Noll, was that everyone believed they had providence – God – on their side.

In 1861, at the outset of the war, preacher James Henley Thornwell of South Carolina was quite confident that God would protect them should armed conflict arise. He wrote, “We prefer peace – but if war must come, we are prepared to meet it with unshaken confidence in the God of battles.” (71)

The North enjoyed the same confidence, bolstered when their cause won the day. In 1865, at a Fourth of July speech at Franklin and Marshall College, theologian John Williamson Nevin declared, “our national deliverance has been wrought out for us, as a world-historical act, by God himself…whereof we are glad.” (72)

Even after the war was lost, theologians in the South reinterpreted events to assert that God was yet on their side. They were “the righteous overthrown,” and God was simply demonstrating his power in allowing the North, powerless and incapable as they were, to gain the victory.

The challenge, says Noll, wasn’t that everyone trusted in providence, but that their trust in providence was “so narrowly defined by the republican, covenantal, commonsensical, Enlightenment, and – above all – nationalistic categories that Protestant evangelicals had so boldly appropriated with such galvanizing effects in the early decades of the nineteenth century. For that kind of providence, the war – with its clash of armies and ideologies, with its unprecedented moral, legal, governmental, and social complications, with its avalanche of death and destruction – should have posed insuperable difficulties” (85).

We aren’t quite at the point of civil war, though I’ve heard the question raised, in somewhat embarrassed but fearful voices over the last couple months. Postcards of armed militia on the steps of capitol buildings does make it seem like 150 years isn’t all that long a time since the last civil war. And it strikes me that we’re certainly in a moment defined by a clash of “ideologies, with…unprecedented moral, legal, governmental, and social complications” and are experiencing an “avalanche of death and destruction.” It also strikes me that a whole lot of people, on both sides of the aisle, are pretty confident that providence – that God – is on their side.

I could imagine that in 150 years, a historian will write a book titled The 2020 Election as a Theological Crisis, an analysis of sermons and articles and blogs trying to understand the moral and theological minefield that dominates our landscape. Because this isn’t just a “political thing”, as much as some might want it to be. Life isn’t so cut and dry. There are, mixed up in every speech and debate and online comment, competing viewpoints on morality, the character of God, national religion, justice, how to read Scripture, and the role of the Christian in the public realm. No election is going to resolve this tension. After all, some of these questions go back to 1861, or 1776, or 1619, or 1517. We’ve been dealing with these tensions for decades – centuries – simmering under the surface until something causes a fissure.

I’m pretty sure things are going to get harder before they get easier. But here’s what gives me some hope. Ironically…it’s the hymn “Onward Christian Soldiers.”

Like a mighty army
moves the church of God;
Brothers, we are treading
where the saints have trod;
We are not divided;
all one body we,
one in hope and doctrine,
one in charity.

I’m not advocating that we all join hands and skip down the road singing children’s songs as though nothing was wrong. Even the hymn writers allowed some hymnals to change “we are not divided” to “though divisions harass” in an acknowledgement of the reality they faced.

I am advocating that we place ourselves squarely behind the cross. That as we think about what it means to live out our faith, we do so from a posture of sacrifice, humility, mercy, and love. That we live out of a theology of the cross, not a theology of glory. That we don’t try to square God away with our beliefs but align our beliefs with what we know about God. That if we are triumphant in anything, it’s Christ and him crucified.

And that if we’re going to invoke “Onward Christian Soldiers,” we do so with the occasion for its commission in mind – a celebration of the day of Pentecost, that day when the Spirit descended upon the church to empower her, not to rule and overthrow, but to serve. A day that demonstrates that the providence of God is far greater than any one group of people could ever lay claim to or imagine. A day that foreshadows that great day when wars will cease, and our AK-47s will be beaten into garden trowels, and God’s people will be one.