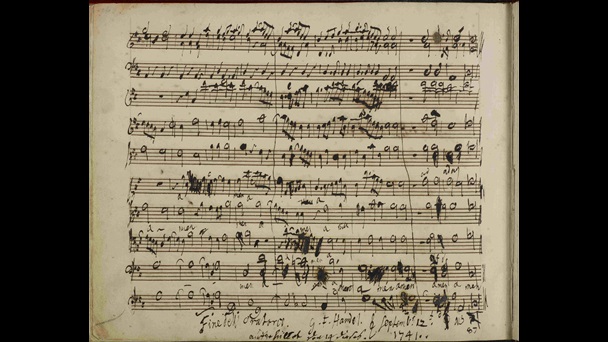 When Dr. Francis Collins received the Templeton Prize this year, he gave an acceptance speech titled “In Praise of Harmony.” As a geneticist, physicist, and committed Christian, he has dedicated much of his career to communicating the harmony between faith and science. In the speech he lamented the lack of harmony in our politics, global climate, and racial relations.

Collins spoke of our longing for harmony, using an example as we experience it in music:

Dissonance can of course be a powerful motivator – but one that should inspire an effort to resolve it. The third to the last great “Amen” at the end of Handel’s Messiah, ending in a crashing, wrenching, unresolved, and prolonged A7 chord, with the 7th ominously prominent in the bass line, never fails to bring to me a tightening of body and spirit that is almost unbearable – but then after a terribly long pause, moves to the most powerful resolution of D major imaginable, accompanied invariably, at least for me, with a flood of tears.

I wanted to listen to a recording of the Messiah when I heard Dr. Collins say this, and he’s right: that is a chord that demands to be resolved.

He’s right, too, about the dissonance that we feel as we try to care for our neighbors and our planet. The chord needs to be resolved, but we don’t hear any harmony. The dissonance just seems to get louder, dissonance between what ought to be and what really is.

In both Psalms, a community laments together to the Lord. “We have become a taunt to our neighbors, mocked and derided by those around us.” (79:4) There is dissonance between their honored identity as God’s people and the dishonorable treatment they receive.

In both Psalms, the destruction of the temple is a cause for lament. “They have defiled your holy temple.” (79:1) There is dissonance between the holy presence of God in the temple and the profanity that their enemies have brought to that place.

And in both Psalms, the people use the character or name of God as a reason for God to act on their behalf. “Help us, O God of our salvation, for the glory of your name; deliver us, and forgive our sins, for your name’s sake.” (79:9) There is dissonance between God’s reputation as a protector of God’s people and the sad reality of their situation.

The difference with Psalm 79 is that it includes a harsh desire for vengeance. The people don’t simply want God to help them; they also want God to destroy their enemies. “Return sevenfold into the bosom of our neighbors the taunts with which they taunted you, O Lord!” (verse 12)

Now there’s dissonance for me as a reader of the Psalm. How can these people singing the Psalm be so vengeful? Don’t they know that God is a God of mercy and compassion?

The call for vengeance makes more sense when I remember that it is sung by people who are victimized and powerless. Psalm 79 calls me to humble understanding about how I experience dissonance in God’s good creation. I often have some power to seek my own resolution, power that the people who first sang Psalm 79 did not have.

When I sing this Psalm today, I sing it in solidarity with them and with others who do not have much power of their own. All they can do is cry out to God to save them. And the only way they can imagine that God will save them is by destroying their abusive enemies.

Psalm 79 also calls me to hear the harmony beyond the dissonance. God hears our cry in this Psalm as we ask God to return the taunts of our enemy sevenfold. And then God invites us to seek harmony, as Jesus told Peter to forgive his brother seventy times seven. Only Jesus could say this, because only he absorbed the dissonance of the world into himself and brought forth the harmony of the kingdom of God. This kind of forgiveness and harmony happens only by Jesus’ power, which is why we cry out to the God we know in Jesus.

We haven’t heard the final chord yet. As our ears long to hear it, we know that our world was made for something more: more harmonious, more loving, more just. We cry to God for resolution.

Rebecca Jordan Heys is the Minister of Worship and Pastoral Care at Calvin Christian Reformed Church in Grand Rapids, Michigan.