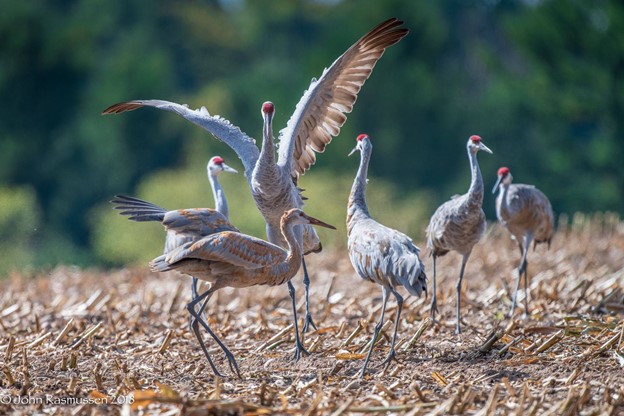 The Creighton Truck Trail meanders north on the remote western edge of Seney National Wildlife Refuge. Westward is a nearly trackless expanse of northern hardwoods bisected by Yooper-slow river floodplains of tag alder and black spruce deep enough to swallow your senses of time and direction. Eastward is the remote dreamscape of Seney’s patterned fen wilderness, given the deliciously direful name: Strangmoor bog.

I was outside the truck with a directional antenna, trying to find the signal of one of my radio-collared deer when I heard an otherworld sound. A sound beyond description. Clearly, a sound with a wild biological origin.

I had to know what that was. So I put my water bottle and binoculars in my pack and started out to the east through the alien Strangmoor, crunching through an ankle-deep forest of reindeer moss (a lichen) and skirting ancient black spruce dwarves no taller than my shoulder on the dry ridges.
I crossed occasional carpets of winter-red leatherleaf and domed heads of spongy sphagnum in the “valleys” that were lower by a mere matter of inches – and still frozen underneath.

I kept an eye on my compass so I could dead-reckon my way back to the truck. I was Gulliver stepping gingerly deeper into a Lilliputian landscape compressed by the twin ecological constraints of persistent cold and nutrient-poor chemistry.

Wings alive on the edge of a dark boggy pond, a coven of gangly grey beasts were dancing on the fine boundary between the sodden earth and free breezy April sky – giants themselves. It was my first encounter with Sandhill cranes. A first association of them with myth, mystery, and wildness.

I’ve seen a lot of animals in my life as a wildlife biologist but there are no more than a small handful that I can remember a first time I saw them. That was over 30 years ago.

Now, I live with cranes all spring, summer, and fall in my tame little world. They graze on the lawn outside my dentist’s office. I see them on my neighborhood walk and, on the Wisconsin-Madison campus. I hear their now common but ever primal call through the open window of my bedroom. Contra the dictum that familiarity breeds contempt, familiarity with cranes breeds joy. (Seven cranes flew over my backyard just now as I was writing this.)

Aldo Leopold wrote his essay “Marshland Elegy” (in Sand County Almanac) during the 1940s when he believed that cranes were going extinct in Wisconsin. It’s his most evocative and artful but even he, naturalist and writer that he was, struggled to describe that sound – variously comparing it to “the tinkling of little bells”, and “the baying of some sweet-throated hound”, and “a far clear blast of a hunting horn.” Leopold died fighting a marshland wildfire in 1948 on his neighbor’s floodplain farm. The Wisconsin River, at nearly that very spot, now hosts a yearly staging of thousands of Wisconsin Sandhills. I often imagine how delighted Leopold would be to know that he was wrong about cranes’ extinction.

Sandhill cranes are on my mind because we just turned the calendar to October. My crane neighbors are staging in the green areas and ag fields, building their energy stores and preparing to migrate south. In a day or so, they’ll be simply gone. Gone, until some muddy raw March day, when they’ll ghost out of the ice-fog or bugle through a cold early morning, assuring us winter-tired people that spring is coming. Just hang on.

A remote fen is as alien a place as one is likely to find in the Great Lakes region, complete with its own otherworldly travelers. Closer to home, my students and I pilgrimage 45 minutes north to the International Crane Foundation from time to time. The Foundation has living cranes from around the world and interpretive displays and I am impressed that every indigenous culture that lives with cranes comes to consider them holy. I’m not surprised.

Neither was Leopold. In the “Elegy” essay he famously wrote, “Our ability to perceive quality in nature begins, as in art, with the pretty. It expands through successive stages of beautiful to values as yet uncaptured by language. The quality of cranes lies, I think, in this higher gamut, as yet beyond the reach of words.” As Paul writes (Romans 1:20), there’s universality in contemplating that higher gamut.

Nothing focuses me like a long bike ride. A few Octobers ago, I was asked to speak to our campus group of Christian faculty about campus’s “Big Read” that year, Dan Egan’s book, The Death and Life of the Great Lakes. I was asked to speak by a friend who knows my love of the Great Lakes and the deeper I pedaled into my own thoughts, the darker it got because of looming preventable threats from CAFOs, invasive carp, and that evil pipeline.

Rounding the corner by the Naut-i-gal (a waterside pub), I surprised four cranes standing in the bike lane. I swerved left as hard as I could and the cranes scrambled to get out of my way. The one nearest surprised me by turning towards me in what looked like a defensive posture with its shoulders up and head lowered. For a brief moment we were almost literally face to face with me on the business end of that prehistoric ice-pick of a bill. “This is going to hurt” I thought.

But he was only crouching in order to leap his bulk onto his broad beating wings. He brushed my arm with his primaries and prop-washed my face and I was instantly grateful that there was no traffic in the lane beside me when I swerved. It happened so fast.

Maybe it was the adrenaline buzz but I rode on with my head up looking for cranes and seeing the ducks staging too, the buzzards circling over the fashionable neighborhood that used to be a farm (now there’s a metaphor!) and a little green warbler steeling itself for its flight to the Caribbean. With the Great Lakes still churning in my imagination, it occurred to me that I had encountered the sacred.

It touched me on the elbow.