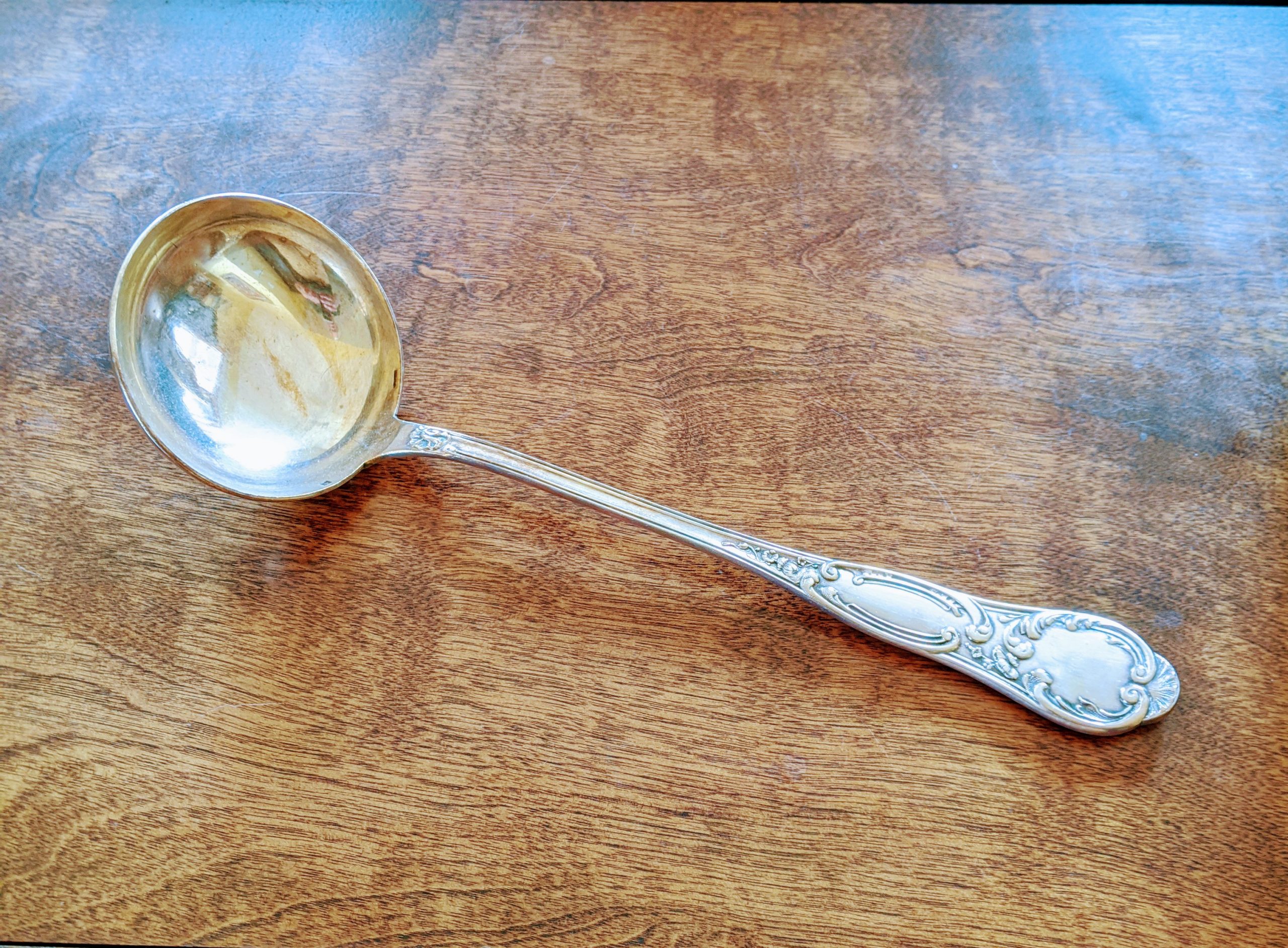 The soup ladle pictured above is from Bonnemaman’s girlhood home. Bonnemaman was my wife’s lovable, buoyant grandmother whose life came up a few months short of a century, 1900-2000.

Bonnemaman and her family lived in northern France, near the Belgian border. During World War I, their home was first requisitioned as a British command post. Then it quartered Germans, and finally was utterly destroyed in battle. The ladle is one of two small items the family found upon returning after the war. Used to scoop salt, all the silver had corroded off, but later Bonnemaman had it resilvered.

The ladle sits in a fairly prominent place in our home. I’d always seen it as a memorial of sorts, a reminder of the sorrows and cost of the past. And maybe it is.

But recently I’ve begun to understand the ladle as a sign of hope, of the resilience of humanity, of a better future. Tough and terrible times come. But we persist and struggle and ultimately overcome. Life goes forward.

You could say that I’ve been thinking about “progress” lately.

We believe in it, more-or-less, don’t we?

(It was “Oh, I Get It, This is the Bad Place“ by Jeff Munroe, a month ago here on The Twelve that especially restirred my thinking. I would also commend “A Birthday with the New York Times” by Keith Starkenburg that also seeded this discussion.)

As Christians, we are apt to support the notion of progress. The Holy Spirit is on the move, ahead of us, revealing and sharing the victory of Jesus Christ. “Your Kingdom come. Your will be done.” History is heading toward the return of Christ and the healing of all things. The future is already among us. This sort of wild, eschatological hope sustains us in darkest times.

As modern people, we are even more inclined to believe in human progress. We’re children of the Enlightenment. We have imbibed great confidence in human abilities and technology. And not without good reason. I live with an abundance of food — that I did not raise — in an electrified refrigerator. We may wait for a COVID-19 vaccine, but the breakthroughs of medical science over the past couple centuries, even the last couple decades, are astounding. Space exploration. The internet. Superhighways. Skyscrapers. Yes, sadly, too many of these breakthroughs are enjoyed by only a small minority of the world’s wealthy. Still, plenty of people point to evidence from healthcare to human rights that things are getting better for those on the bottom of the social ladder. If many are left out, is it really progress?

Suppose you were to make a venn diagram with one circle labeled “Your Kingdom Come” and the other “Human Progress,” how much overlap would there be? How much is one seen in the other? Hard to know, isn’t it? My answer probably depends on when you ask me. Progress is something we can often chart, almost connect the dots. It seems like simple arithmetic alongside the quantum physics that is hope. No one can really plumb it’s depth.

Historians have taught me that the world tends to swing back and forth between hope and despair. The Lisbon earthquake (1755) and World War I are examples of landmarks that brought down broad societal optimism.

Someday this global Coronavirus pandemic will be seen as a similar landmark.

Six months ago, I thought differently. I had hoped that this was our “greatest generation” moment. This was our opportunity to display unity and sacrifice, courage and stamina. I was wrong. My hope was misplaced.

In downtown Des Moines, Iowa, the windows of government buildings are still boarded up after some midsummer protests. Whether you blame radical anarchists, or police brutality, or unrelenting systemic racism, or anything else — boarded up windows seem like a sign that something is amiss. This is Iowa, after all!

Long, long ago in a history class, we were studying “great empires.” As the section was wrapping up, the teacher summarized, “Of course, all empires come to end. Occasionally it is dramatic and violent. Often they just slip away, dissolve, decline.” We all nodded obligingly and unmoved. But then he went on. “The United States is an empire of a sort, certainly a world-power. Somehow, someday, the same will happen here.” His tone was calm and objective. There was no fear-mongering, no gleeful anti-Americanism. Simply a historian making an observation. A bunch of 20-year-olds stumbled out of class dazed and troubled that day. Our world had been shaken. Such thoughts had never before crossed our minds.

If the 20th century was the “American Century,” I think there is a looming sense that the USA is overripe. Past our prime. This isn’t something that’s happened in just the last four years or the last six months. It’s been seeping in for the last forty or fifty years. Right and left have different diagnoses, different villains to blame, but quietly they all fear that something is slipping away. Trump’s MAGA simply spoke into this fear most clearly, a bellicose attempt to return to a past that never was.

Likewise, “American exceptionalism” may bring to mind adolescent chest-thumping and chants of “USA! USA!” But I think there is an unspoken and subtle variety of exceptionalism wafting through nearly every American. We’re so accustomed to it, it feels only natural, nearly divine-right. The thought of not being “number one” unnerves us. It just doesn’t seem right, even if we can simultaneously acknowledge how arrogant and irrational that is.

Why do we imagine the tumble from number-one status will be a cataclysmic event, a chaotic descent in the post-apocalyptic world of Mad Max where everyone will wear studded black leather and an eye patch? Or even into a backwater banana republic? (Well, given present circumstances, a banana republic doesn’t seem so far-fetched.) Still, what if the USA someday discovers that being number 11 or 28 isn’t so bad? I’ve been to Rome, England, France, Japan. All former superpowers or empires in their way. None of them seem to be suffering too much by no longer being number one.

And notice how quickly I’ve veered off course. Easily slipping from a larger discussion of human progress and divine hope into a particular focus on an American decline. It’s as if I am incapable of thinking about human progress and flourishing without necessarily tying it to the USA.

Where does this leave us?

I sense my own sadness, uncertainty, and fear, even as I sift for memories of human resilience and scan for signs of hope. I remind myself that what happens in the USA, while significant, isn’t the whole of humanity or history. Even more, I remind myself that while human progress and hope in Christ may be somehow related, they are not the same thing. And then I remind myself still one more time.