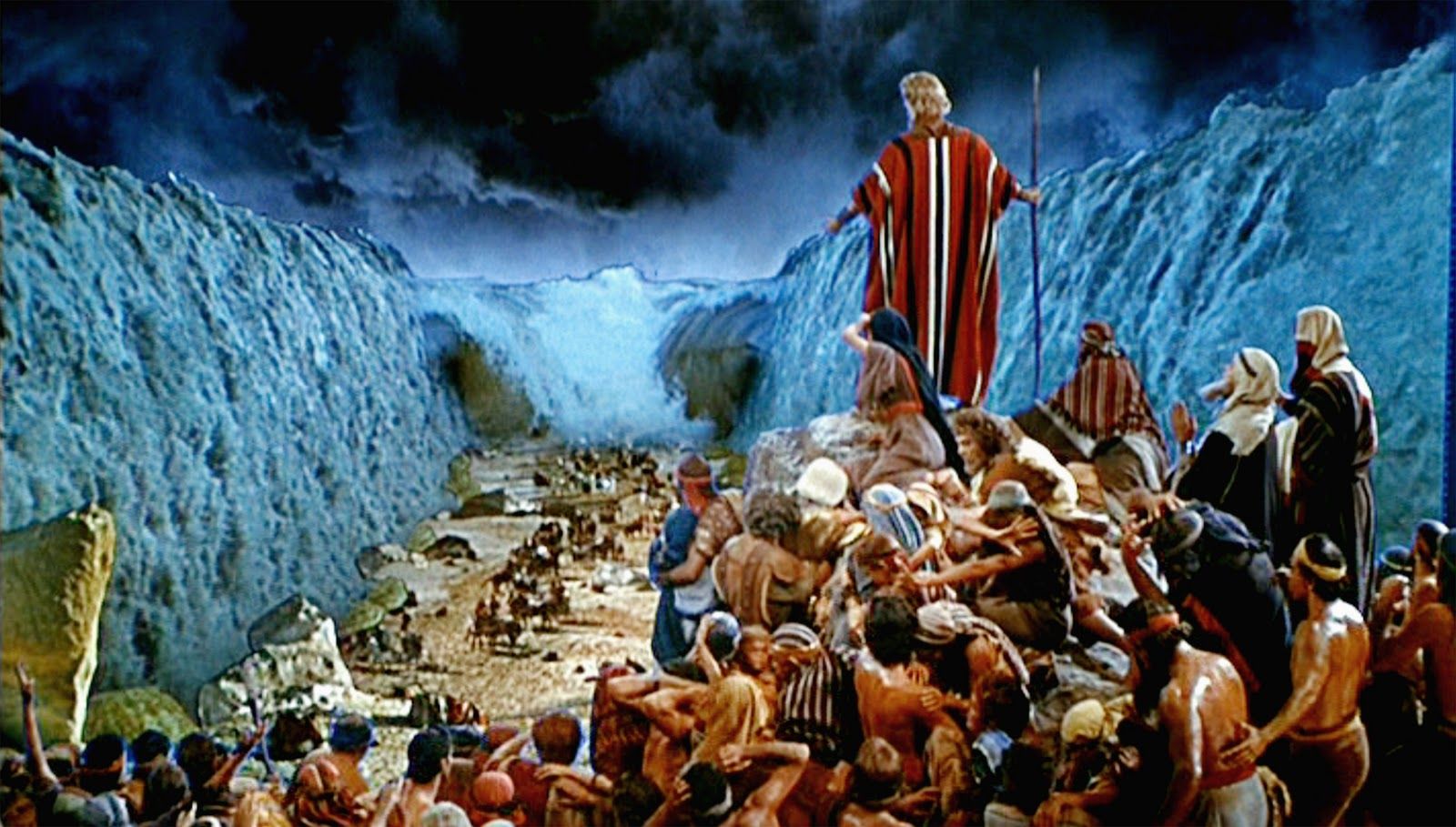 To be perfectly honest, this is one of those weeks when I greatly expand on the pericopes laid out by the Revised Common Lectionary (RCL). By beginning at Exodus 14:19, the RCL hits the highlight of this story of crossing the Red Sea:

All wonderful and dramatic. Many parishioners of a certain age can picture the scene from Cecil B. Demille’s The Ten Commandments in their heads, complete with the green jello (When this movie was made in 1956, green jello was used to create the parting-of-the-sea special effect. Lots of us with Dutch Reformed backgrounds may be strangely comforted by the idea of that much jello salad in a biblical epic).

Now, the problem with this slicing and dicing by the RCL is that, first of all, it assumes that everybody sitting in the pews knows the story of what happened between the clean-up at the end of the first Passover dinner and Israel’s first big beach party. Most of us pastors in most churches — Reformed or not — know that this isn’t typical biblical literacy for typical people in the pews in the US in 2020. Even if the parishioners have watched the movie, they probably wandered off for some snacks during that bit.

Second of all, this diminishes the true power and significance of “the great work that the Lord did” (Exodus 14:31, NRSV) in this story. Sure, there’s this showy spectacle, but, in the fuller story, this great work happens in the face of Egyptian stubbornness, Israelite fear and doubting — when they cry to God for help, it’s a complaint — and a night or more of suspense while God’s chosen people are trapped between an army determined to kill them and the sea. We also miss the singing and possible dancing by Israel when they are safe on the other side (Exodus 15:1b-21). The fact that Israel, in what would be a recurring theme, still cannot trust God, yet God saves them anyway, makes the event all the more miraculous.

Even so, the RCL version of the story is probably the one many Americans prefer. Don’t waste lots of time. Just get to the splashy highlight where the good guys win. And this, arguably, is what we are expecting from God, or at least we were, in this time of COVID.

Remember back in March, when we were told — or had we told ourselves? — that we were going to shut down for two or three weeks, then switch our world back on and go back to doing what we were doing? Now that we are in September, we wonder if we will ever see normal again.

When we are honest with ourselves, we know it won’t be like the normal we had. God is giving us the full-length version of salvation, replete with a place where we are afraid to go and having to wait in the presence of other things that frighten us terribly. The skies in part of our world are orange and red from fires and smoke, and ten percent of the state of Oregon has been asked to evacuate this weekend. By the way, in case we have forgotten, people who were in the path of Hurricane Laura are still putting their world back together, racial tensions are still quite raw — the governor of Oregon reported on Friday that the Black Lives Matter protests have continued in Portland even as fires approach the city — and families have been pushed to the edge. There are refugees from other communities now having to flee the fires.

In the face of all of this, and with the sounds of our doubting and complaining in the background, God is saving us. God hasn’t brought us this far to leave us in this mess. Not that it will be easy. We have been working hard to ignore all of the warning signs for a while now.

We will need to go someplace that we think we cannot go. We are being called to cross a sea, and there will be no going back. No matter what, we will be redeemed, and the story of our redemption will be bigger, more complex, and more wondrous than we ever expected to tell.