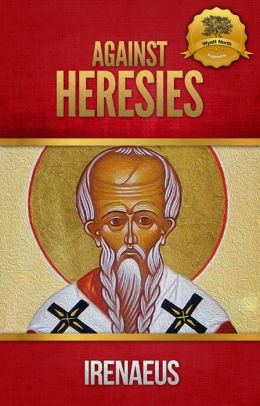 Fighting against heresy is a deep-seated part of church history.  We maybe don’t like to think of Christianity that way.  We prefer to present Christianity as the proclamation of Good News, of the Gospel, of peace and hope and joy.   And it is principally all of that, of course.  Karl Barth’s alleged assertion that all of his vast theology could be summed up in “Jesus loves me this I know for the Bible tells me so” is at bottom correct.

But the truth about Jesus, his life, ministry, death, and resurrection has always had to be proclaimed in a marketplace of competing ideas and worldviews.  In addition to the more obvious presence of completely alternative religions, syncretism was all along the greater threat.  All the little ways by which false ideas can nibble around the edges of orthodoxy so as to forge a compromise here and a compromise there have always been of great concern to the pastors, teachers, theologians, and philosophers of the church.  The antichrists who loudly proclaim their disbelief in the Gospel and in the existence of Jesus are outmatched by those who profess Jesus with their lips but who have also woven in a smattering of other ideas that end up perverting the faith from within.

It is no surprise, therefore, to find that combatting heresies was one of the main works of the earliest theologians, those sometimes referred to as “the Church Fathers.”   Irenaeus had a whole book titled Against Heresies.  But most of the earliest Christian writers like Origen and Athanasius and others devoted a lot of the pages of their writings to pointing out the (oft-subtle) corruptions of various heretical doctrines.  Augustine is famous for lots of reasons but not least for his battles against Pelagianism and Donatism.

Even the New Testament writers were constantly taking aim at false teachings that were creeping into the church, usually in the form of a syncretistic blending of a little true doctrine with a little (or a lot) of false teachings.  The Apostle John in his Gospel was clearly already concerned with the oldest of all heresies: Gnosticism.   If you know what to look for in John, you can spy anti-Gnostic emphases all over.  The Apostle Paul also was forever warning the early Christians away from various Greek, Roman, and even some Judaic false teachings.  Read through the right lens, the entire Letter to the Colossians, for instance, is a clear assault on then-common teachings involving angel worship and various spiritual hierarchies that were trying to incorporate Christ into other false systems of spiritual teaching.

In today’s marketplace of ideas—many of which get amplified through social media—there are of course obvious wholesale alternatives to the Christian faith.  Few have a hard time spotting the differences among Christianity, Buddhism, Hinduism, Islam, Judaism, Taoism, and any number of completely different religions.   But as has been perennially true, there are lots of harder-to-spy mixings and blendings of Christian teachings with other systems, including the encroachment of nationalisms of various stripes or mystical spiritual beliefs of dubious pedigrees.   And in recent months we have heard increasingly more about the QAnon movement that, according to some observers, is starting to infiltrate also the church with its darker conspiracy theories and the promotion of alternative saviors and heroes.

QAnon may or may not count as a heresy just yet.  It may just constitute an alternative worldview on a wholesale level not much different than how Islam differs from Judaism or Christianity.   But one thing QAnon seems to have in common with heresies like Gnosticism or angel worship is that it is an attempt to make sense of a chaotic world.  Is there a system of thought, a set of explanations, that will help us parse the times in which we are living?  For QAnon and similar belief systems in recent times, that parsing is done on the level of conspiracy theories.

Some while ago I observed that conspiracy theories tend to crop up when we are faced with a set of circumstances so dire we simply cannot accept garden variety explanations.   A lone gunman like Lee Harvey Oswald could not possibly have taken down the dashing young President of the United States.  A handful of terrorist thugs could not possibly have taken down the Twin Towers and attacked no less than the United States Pentagon.  There must be others involved, deeper and darker powers at work.   A single virus cannot possibly on its own infect and kill so many people worldwide.  Some deep state actors with a stake in all this must be responsible.  Because otherwise life feels a little too random to accept.  We cannot live with so much uncertainty, with the idea that we could be so vulnerable.

Of course, the difficulty today is not that there are heresies and syncretisms that threaten the church or its teaching of the Gospel.  This has always been true.  The difficulty for pastors and teachers and others is to try to combat something like QAnon in an age of “alternative facts” when experts equal “elites” and when “elites” are the enemy.

In her epistolary novel Gilead, Marilynne Robinson presents the words of the minister Rev. John Ames as he reflects on his life during the 1950s in an Iowa small town.  At one point Rev. Ames notes how he had been proclaiming the Gospel faithfully and well for decades and how he had always been careful to get the teachings of Jesus and of the church correct.  But then he laments how in more recent years all of that has gone out the window for some people since any fool minister with a radio program can exert more influence on the members of his church than his sermons could hope to achieve even if said radio preacher does not know his theology from his elbow.

Fast forward from Rev. Ames in the 50s to today and all of that is magnified a million times over by the influence of social media.  Why listen to your own pastor and what she is trying to say when Facebook and Twitter assure you a hundred times over every week that there is something to this whole QAnon thing?   Why listen to alleged theological “experts” when your friends are so convincing?

It was never easy for the Apostle Paul or for Irenaeus or for Augustine to combat the false teachings and heresies in their day but thankfully they did not have to compete with social media in so doing.  It is difficult to know what has to change in the structures of our societies as they have evolved via the internet in recent decades before balanced, rational conversations can be had and before those who truly have something to say on account of having thought, prayed, and studied are actually listened to again.  But as things stand, those who wish to try to stand up for the truth against waves of falsehoods face long odds, even in some of the ostensibly most conservative parts of the “traditional” church.

Jesus promised at the end of John’s Gospel that a key function of the Holy Spirit would be that the Spirit would incessantly lead us into all truth.   We should pray that will indeed continue to happen and that more believers, not fewer, are willing to follow that Spirit’s lead.