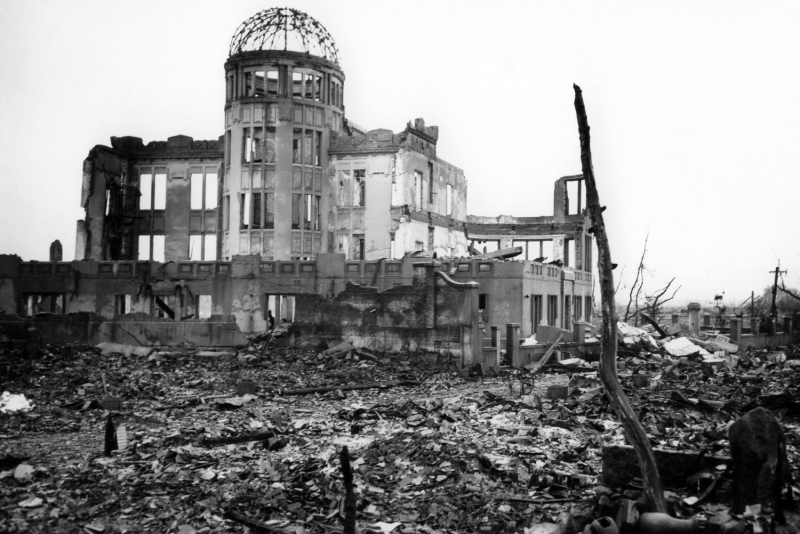 A momentous anniversary, eclipsed by current crises, demands our remembrance today. Events of 75 years ago changed our world profoundly and irreversibly.

In August 1945 it took just a few milliseconds for a powder charge of conventional explosives to set off a chain reaction in a mass of fissile material – 141 pounds of enriched uranium over Hiroshima, just 11 pounds of plutonium over Nagasaki three days later.

Explosions more powerful than 16,000-ton bombs destroyed the two city centers, reducing buildings and people to toxic ash.
In many ways this was just another step in the evolution of 20th-century warfare, as longstanding limits on war’s devastation were set aside, one after another, for military objectives. Poison gas had devastating effects in the First World War. Indiscriminate attacks on non-combatants became routine German and Allied tactics in Europe. The American firebombing of Tokyo in March 1945 killed 100,000, more than either atomic bomb.

Yet in August 1945 a new world dawned that we can never exit. President Truman’s threat to attack a dozen more cities, when only a few bombs remained, was a bluff. Yet a decade later the US arsenal had grown into the thousands, not only fission bombs but also far more devastating fusion weapons. The Soviets built their own comparable nuclear arsenal.

From 1945 until the end of human history, every confrontation between nations will carry the potential to trigger devastation on a global scale. Once we spoke of armies “going to war.” Today war can come to our doorstep, wherever we are, borne by a missile.

What if the world had responded in 1945 with an immediate ban on atomic bombs? What if the few remaining bombs in US hands had been destroyed, the weapons labs disbanded? Only in our dreams.

Every new invention elicits the desire to make more, bigger and better. A new horseless carriage that can speed along at 25 miles per hour? Let’s build one that goes 125. Has a human astronaut been rocketed into orbit and returned safely? We’ll send men to the moon and robot telescopes to the boundaries of the solar system. Impressed by the skyscrapers of New York? Beijing, Kuala Lumpur, and Dubai can build them taller. And the destructive power of weapons, predictably, grew exponentially after 1945.

Thirty-five years ago I wrote about an earlier Hiroshima anniversary in the Reformed Journal, then a monthly periodical. (“Aftereffects: The legacy of Hiroshima and Nagasaki,” Reformed Journal, 35:8, August 1985, pp. 10-13.) It was true then, and by God’s grace still true today, that no nation but the United States has ever detonated an atomic bomb in war. Awareness was far higher then of the threat of nuclear conflict, however. Best-selling books forecast “nuclear winter” after a superpower conflict. Dutch churches launched a campaign to “rid the world of nuclear weapons beginning with the Netherlands,” as on the button above. On June 12, 1982, a million people rallied in support of a United Nations disarmament conference, the largest demonstration in the nation’s history. (See “No More Hiroshima: The march in New York,” Reformed Journal, 32:7, July, 1982, pp. 10-15)

But the two major nuclear powers, locked in ideological conflict, were expanding their arsenals rapidly. By 1985 there were 70,000 nuclear weapons in the world, all but a few thousand held by the US or the USSR. Leaders of both nations boasted, like teenage boys, that ours are bigger and better than yours. President Ronald Reagan persuaded Congress to authorize 100 new ICBMs, each carrying ten nuclear warheads – and to baptize them “Peacekeepers.” Fifty remain on alert today.

Thankfully the nuclear arms race of the 1980s has slowed significantly. Bilateral and multilateral nonproliferation and disarmament treaties – and the unreliability of decades-old warheads – have brought the global nuclear weapons tally down to 13,000. Of these, American and Russian forces hold about 4000 each, 1500 on each side deployed and ready for launch. A few hundred more are in France, Great Britain, China, Pakistan, India and Israel.

The Trump administration proclaims its support for disarmament, but its actions speak louder. It has renounced past treaties limiting missiles and battlefield nuclear weapons, ramped up development of new nuclear weapons, and abandoned international efforts to monitor developments in Iran.

These actions are only a small departure from previous administrations, however. Democratic and Republican presidents alike have issued high-sounding appeals for disarmament while retaining and updating enough bombs to destroy every city on the globe several times over, with plenty in reserve to bounce the rubble. Russian leaders have followed the same script.

If we recognize a moral authority higher than the nation-state, what can we say about the duplicity and the danger of current nuclear policies? From the dawn of the nuclear era, Christian voices have invoked the teaching of the church, consistently upheld from the time of the early Fathers, that willful harm to the innocent is impermissible, in war or in peace. Nuclear weapons by their nature flout all such moral limits.

Catholic pontiffs have been among the most forceful recent voices. Pope John XXIII’s wide-ranging 1963 encyclical, Pacem in Terris, stated flatly: “Justice, right reason, and the recognition of man’s dignity cry out insistently for a cessation to the arms race. . . Nuclear weapons must be banned.” All his successors have concurred. Pope Francis went a step further in 2017 when he stated that, because of the risk of accident or error, “the threat of [nuclear weapons’] use, as well as their very possession, is to be firmly condemned.”

Protestant church assemblies have spoken with equal force. The 2006 report on peace and war adopted by the Christian Reformed Church in North America stated boldly: “We reaffirm the declarations of Synod 1982 that nuclear weapons should not be considered legitimate means of warfare, and we once again call on all current nuclear powers to halt the production and proliferation of nuclear weapons and reduce the stockpiles now accumulated.”

Already in 1955 the forerunner of today’s Presbyterian Church (U.S.A.) stated, “We believe that lasting peace requires the elimination and prohibition of all weapons of mass destruction.” A 2018 statement elaborated: church members should “renounce the false god of nuclear security with its promise of catastrophic consequences; renounce any policy that threatens the death of millions of God’s children in any land with a single command and a single warhead,” and work with other faith communities to seek “total elimination of nuclear weapons from the earth.”

Drawing on two millennia of theological and moral reflection, church bodies have rejected the false claim that nuclear weapons are legitimate weapons of war. And yet, drawing on 75 years of increasingly sophisticated technology of destruction, the nation’s leaders have maintained and refined their toolkit for sowing death and destruction anywhere on the globe at will, even while claiming that this is the way to preserve peace.

The policy of nuclear deterrence amounts, after all, to a sanitized and enlarged version of the terrorist’s threat: do as we say or we will kill you and your family. Communicated through anonymous phone calls to a politician or business leader, it is outrageously immoral. Can it be the foundation of a moral polity when it is proclaimed from the halls of government? Christians must continue to stand up and say no.