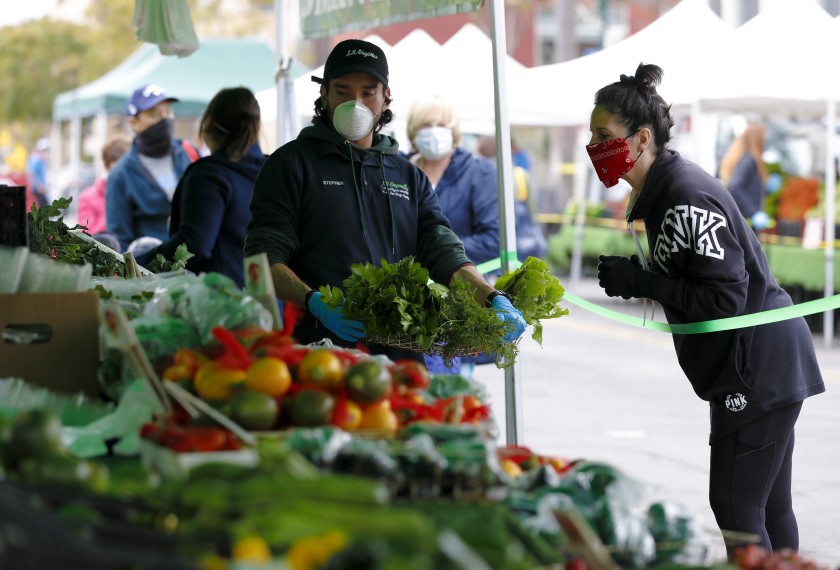 JWWM: Jesus Would Wear a Mask

Then the devil led Jesus to the entrance of the Jerusalem Farmers Market.   Jesus observed that most people were prudently wearing face coverings and masks to protect from a severe virus that had made many in the Holy City sick in recent weeks.  And the devil said unto him, “If you are the Son of God, then enter the market, talk, shop, and laugh but do not wear a mask for it is written ‘He will give his angels charge over you’ and so we know God will protect you and others from the virus.”  And Jesus replied, “It is also written, ‘You shall not put the Lord your God to the test.’”  Jesus then put on his face covering and entered the market in search of some fresh figs.  The devil then left him . . . until a more opportune time.

A more opportune time may have come, not to tempt Jesus but perhaps others.   But then, the devil is always an opportunist when it comes to temptation.  My little riff on the Temptations of Jesus is shooting fish in a barrel in one sense when it comes to applying Jesus’ interactions with Satan to our current pandemic and the controversy over wearing masks.  And it would seem unnecessary to make this analogy were it not for the fact that there are some out there making religious arguments that all-but necessitate a response.   Here are some words from a Livestream of a political activist in California on this very subject:

“A mask is a symbol of fear. You’re living in fear. If you have a mask on, it means you actually don’t trust God. You don’t have faith.You’re living in fear instead of faith. And of course, the Marxist globalist Satanists that are pushing all this, they are trying to invert reality and pervert God and Christians, and they want to isolate us from God, isolate us from other humans, and deprive us of that faith so that we rely on the government, the media, telling us what to do and telling us whether to be fearful or not instead of God.”

OK, so this person is a bit loopy.   So now let us turn to someone far more eminently respected: John MacArthur.  In a statement released from his church on Friday, MacArthur and his merry band of bad exegetes declared their defiance of their governor’s new orders to restrict indoor gatherings in the wake of a severe increase in COVID-19 cases in California.   The good reverend wrote:

“Therefore, in response to the recent state order requiring churches in California to limit or suspend all meetings indefinitely, we, the pastors and elders of Grace Community Church, respectfully inform our civic leaders that they have exceeded their legitimate jurisdiction, and faithfulness to Christ prohibits us from observing the restrictions they want to impose on our corporate worship services. Said another way, it has never been the prerogative of civil government to order, modify, forbid, or mandate worship. When, how, and how often the church worships is not subject to Caesar. Caesar himself is subject to God.”

Earlier in this message MacArthur spooled out multiple texts proclaiming Jesus as the Lord of all, as the Lord of all creation, as the Head of the church.  All true, of course.  He also anticipated the Romans 13 argument and Paul’s injunction to obey the governing authorities as God’s deacons/servants.  Paul was only speaking to civil matters, MacArthur claimed.  Paul’s words had nothing to do with religion or religious practice or something like holding church services.

Well, Rev. MacArthur, that’s just wrong on multiple counts.  First, Paul was writing to the church in Rome.   In ROME.  Ponder just that for a moment.   Second, the Caesar was in charge of a government officially hostile to the Christian faith—I am pretty sure there were one or two religious ramifications to the kinds of laws the Caesar was enacting and whose programs the Roman Christians were being encouraged to support via their tax payments.  Third, MacArthur also mentioned how Jesus, after being handed a Roman coin with the Caesar’s face on it, said to leave Caesar’s things to him and leave God’s things to God.  Again, true enough except that that same coin in Jesus’ hand would have held the inscription to Caesar as “Deus et Dominus,” as the professed “God and Lord” of the Empire (if not of the world generally).

So MacArthur’s tidy attempts to act as though Paul was encouraging the support of a government that was mostly just enforcing speed limits and sales taxes and agricultural quality standards but that never strayed into matters of faith is too tidy by half.  Yes, even in Roman times if the government tried to force believers to renounce Christ and embrace Caesar, believers refused and sometimes even on the pain of death.  But no one today is asking that of any believers in California or anywhere else in the U.S.  So if Paul could encourage people to obey THAT government in Rome . . .

But nevermind all that for the moment.  For all of MacArthur’s hopping up and down about the superior Lordship of Christ and how we must obey God above and beyond any civil government, there is something else that he never mentions in his defense of defying California’s governor: the thing that Jesus himself declared to be the First and Greatest Commandment and its Great Corollary: You will love the Lord your God with everything you’ve got and you will love your neighbor as yourself.   All the Law and the Prophets hang on this, Jesus said.   Everything.

So when Rev. MacArthur refuses to suspend worship gatherings or even—according to his post—restrict the size of such gatherings in the name of obedience to God’s Law, then he violates the Great Commandment on which all else depends and so proves himself a hypocrite.  Because when close, in-person gatherings become super-spreader events for the novel coronavirus (and right now the two most common places this happens are two places not generally otherwise yoked: bars and churches), and then when people disperse from their “faithful” gathering for worship only to infect store clerks, elderly relatives, coworkers, or anyone else, then they are not loving their neighbor as themselves.  They are just not loving their neighbors.  And you cannot hate your neighbor and claim to love God.  Pretty sure that’s in the Bible somewhere too.

Jesus loved God and loved his neighbors.  That’s why he would have resisted temptation and put on a mask.   And Jesus would not ask where the order to wear a mask came from.  If it was Caesar, so be it.  Then again, if Caesar said not to wear a mask but experts said it would protect the vulnerable anyway, Jesus would still have worn a mask.  And he would have discouraged large gatherings if that also protected the vulnerable neighbors around him.  Don’t put the Lord your God to the test.

If this were all just a matter of partisan politics—and at the end of the day it kind of is—I might not comment on it here on The Twelve.  But because people are wrapping all of this up inside ostensibly strong biblical arguments that go to the heart of the integrity of nothing short of our Christian faith, then the time comes when one needs to say something.

Because remember: the devil quoted Scripture to Jesus in all of his temptations.

Jesus knew, however, that in the end and by itself, that proved exactly nothing.