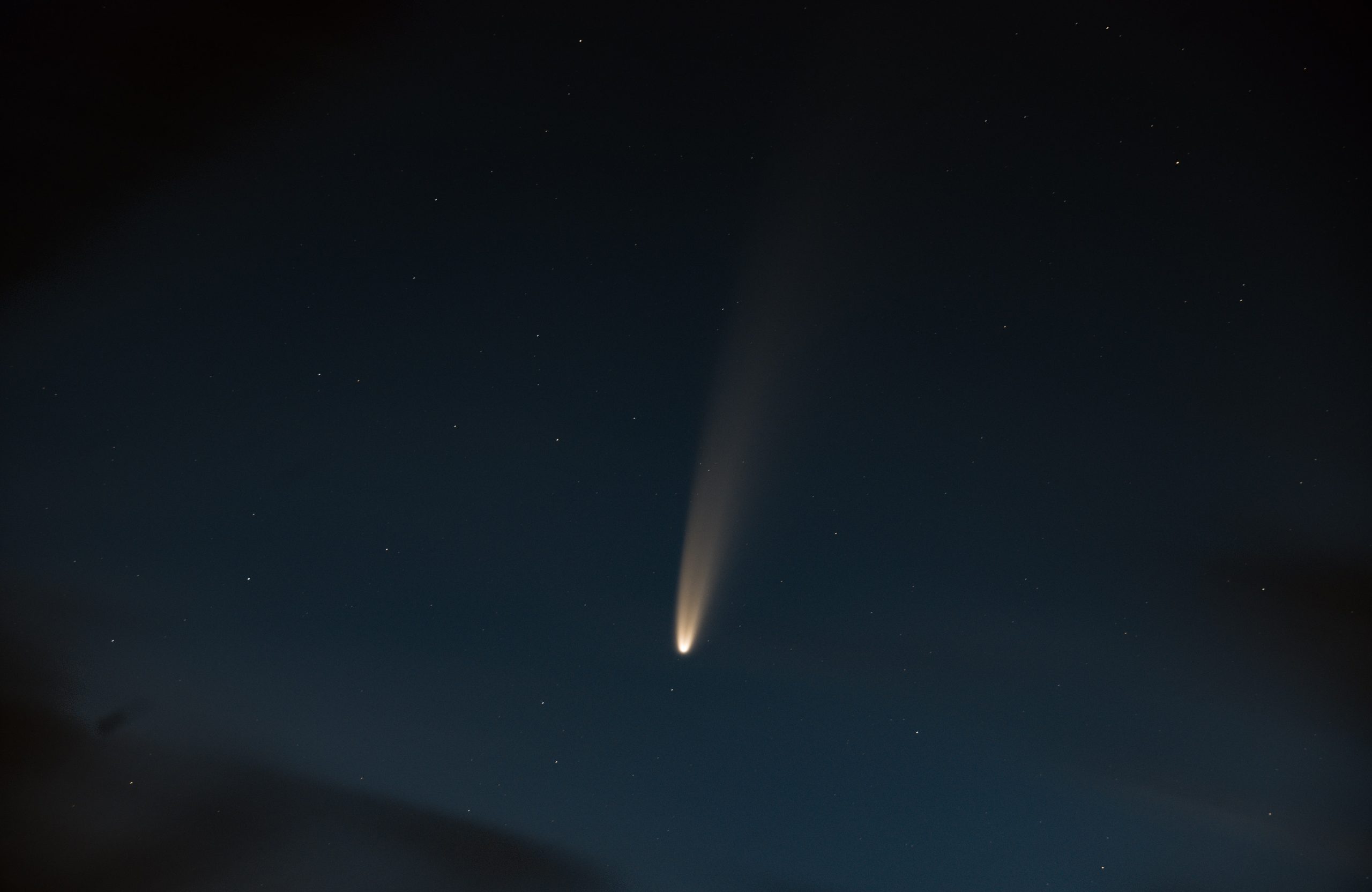 Darkness and Light: Electricity, Comets, and a Giant Raccoon

A few nights ago I was spending time at a lake cabin in Minnesota, alone, when the lights went out. One minute I was getting a drink of water, listening to NPR, the next I was trying to figure out why I couldn’t see anything. This isn’t a “cabin” cabin – you know, a “cabin” twice as big as a normal house; this is a rustic cabin on a lake with plenty of room to roam. I found the flashlights, put one on my head, and thought about what I should do until the electricity was restored. Earlier that day, my daughter told me about a comet that was going to visible just below the big dipper. I didn’t really know what she was talking about, but standing there in the pitch black with only a small headlamp and phone flashlight, I decided to go take a look.

The driveway to the cabin is a long walk through the woods. It’s just two ruts in the ground, with wildlife running back and forth. Lately, there are two does—one with twins and the other triplets—meandering through the property. One afternoon, while enjoying the scenery, a fawn popped out of the woods, looked at me, and just went about doing her thing. It wasn’t until her sister came along she finally left. The red fox who jutted out onto the path wasn’t as calm. One look at me, and back into the woods he went. The most interesting character by far is the large raccoon we’ve named Rocket. One time I was sitting on the front deck in a lawn chair, reading a book, when I saw something coming up the stairs no more than 3 or 4 feet away. It was the biggest raccoon I’ve ever seen. Neither of us saw each other right away, and when we finally did we both freaked out. Rocket ran (actually waddled is a better way to describe it) off towards the woods as fast as he could go. Before getting there, he stopped, stood up, and just stared me down. Lately, I’ve seen him down by the water just taking a stroll along the shore.

When I got to the end of the driveway, I looked down the road—nothing but pitch black. Looking up, the stars popped out, thousands of them. The longer I looked, the more there were. All I could hear were the mosquitos buzzing in my ears, and the slight breeze making its way through the trees. In front of me was open field which gave me an excellent view of the big sky. I found the big dipper, and sure enough, down and to the right was the comet. There I stood, in the dark, staring at a comet. I called my daughter who had gone out to a field on the edge of our town. She was looking at it too—so we shared a moment, experiencing the comet together over Facetime.

The coronavirus is a terrible thing in so many ways, including our messed up politics that has us all fighting over masks. It’s depressing, sad, and causes much anxiety. So, it was nice to be forced to remember that I’m dust—stardust, most likely. The power going out was one more episode in reconnecting with the earth and sky, and the creatures who live around the cabin. I’m grateful I could see the beauty of a large rock hurtling through space, a tiny speck in the universe. The comet was cool, too.