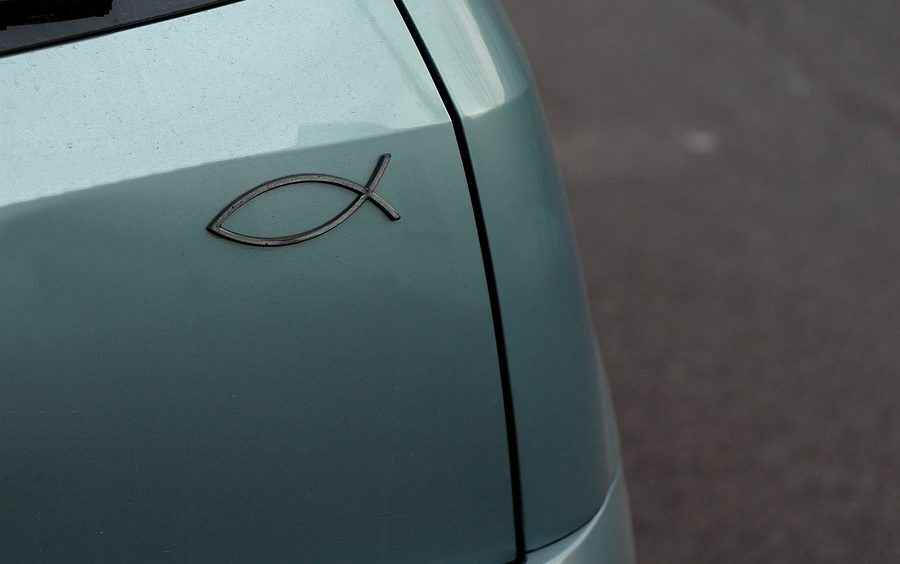 To Be a Witness

I never did put a fish sticker on the back of my car. Many years ago, I considered it for a while — a discreet little fish. Nothing attention-grabbing. Now I’m glad I didn’t. What was my intention? Was I hoping to signal to Christians “We’re on the same team” — sort of like a smudged forehead on Ash Wednesday? Or was I trying to let the world know? Given the number of wry knock-offs — sushi, gefilte, n chips, plus of course, Darwin, science, evolve — apparently the world was noticing.

Lots of Christians are uncertain about how to be a “good witness.” Witness might be one of those words that Christians could give a 200 year time out. Most of us have stopped knocking on doors and preaching on street corners. I’m not sold on bumper stickers, not even an inconspicuous fish. Are we to stand out and draw attention to ourselves? Or do we quietly go about living humble and reverent lives?

We know witness has to do with integrity, endurance, and deeds. Mercy, joy, and peace are in. Pressure, shrillness, and guilt are out. Being curious and open-ended are good. Being authoritative, trying to fix, having all the answers are not good. We say that stories are more compelling than facts. We like to cite the saying attributed to Francis of Assisi, “Preach the Gospel at all times. When necessary, use words.” Of course that’s somewhat problematic for a preacher.

I think about all of this as I watch my white friends (and honestly, all my closest friends are white) try to convey their support for Black Lives Matter and the protests since the murder of George Floyd. I think about it too as I try to figure out how to be an anti-racism witness. (Yes, I’ve read almost all of those “28 ways you can be an ally” articles.)

I’ll confess I was thrown a little off balance when a conservative friend posted something on social media about “virtue signaling.” I looked it up. It said “conspicuously expressing opinions and sentiments, often on social media, to publicly confirm one’s moral correctness and good character, especially through the expression of outrage, hatred, and disgust.” She has a point.

How did the hipster burn his lips? He drank coffee before it was cool.

Who can be the first to post something on Facebook that the real meaning of Christmas is welcoming the refugee and sheltering the homeless? Is it bad form to do this before Thanksgiving? Do you receive a medal if for five consecutive mid-Januaries you post a finger-wagging message about Dr. King not being a tame and tepid figure, but instead a fiery disruptor?

Then I asked a friend, who I know is strongly anti-racist, about his relative quiet concerning the protests and BLM. He replied, “I’m a professor. I have the privilege of being able to influence young minds. That’s where I do my best anti-racist work.” I remembered Paul’s words about a variety of gifts. Could it be that different ones of us have different roles to play, to talk with different people and in different places?

To my friends who do such things, I apologize. Even as I write I realize this is far less about you and far more about me. When I read your messages about silence=death, silence=complicity, I feel accused and inadequate. Am I tame and tepid? Are my ways of witnessing really invisible and cowardly?

Maybe the mellow, relational picture of “witness” that I painted earlier isn’t right for this moment in history. Maybe it is kairos versus chronos. Chronos is simply time, everyday time. Kairos is a decisive moment, a turning-point, a crossroads. Mark’s Gospel calls it when “the time is fulfilled.” Honestly, it can feel like someone is always trying to convince me that now is a kairos moment for something or other. Maybe it is. I believe this is a kairos moment for race relations in the United States. It calls for urgency, maybe vehemence. Our usual tone and form of witness may not be right.

Maybe it’s a good sign that I find contradictory advice and differing opinions about how to be an ally and how BLM should proceed. For example, some say marching and kneeling with police is a powerful symbol. Others tell me it is too easy and cheap; hollow reconciliation. Again, maybe there are different roles, different gifts. There are Malcolms and there are Martins. Both Baracks and Beyoncés. A single answer, only one way, shouting down friends who do differently is not the path to freedom.

Maybe there is nothing wrong with preaching to the choir. Sometimes it can be a good thing. It reminds us of who we are and what we believe. It cements our commitments. Was it Luther who said we need to hear the Gospel every day because we forget it every day? Maybe this year we needed to read about Juneteenth 105 times.

Information has bloated my mind. What I need is something to break my heart. This video — from Middle Collegiate Church, a congregation of the Reformed Church in America, located in Manhattan — did that for me. Sorry if I’m virtue signaling.