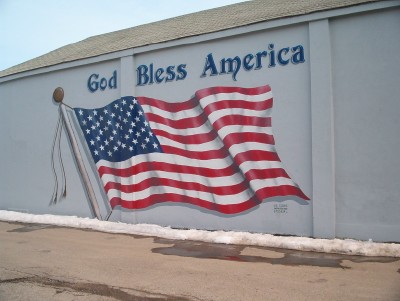 Can We Do Better than “God Bless America”?

In 2009-10 we lived in the Netherlands. The Dutch do lots of things better than we do, including bike paths, reclaiming land from the sea, bread, and public transportation.

There are things the United States does better than the Netherlands. I’m culturally American, and moved back because I decided this is where my home is. I didn’t return because one nation was better than the other. They’re just different. During that time, because of my job I was regularly in Spain, Portugal. France, Belgium, Denmark, Sweden, and Norway. I also spent a lot of time in England and Germany. Each country has its charms and charming people. They are not better or worse countries than the US, simply different.

I vividly recall coming home at Christmas and being jarred by a “God Bless America” sign blazing along a highway. I had two thoughts simultaneously: 1) I’d never seen a sign like that in Europe, and 2) Don’t these people realize how much God has blessed them already?

There are no “God Bless Portugal” signs. This is not because of their paganism. It’s because they already tried theocracy and found it wanting. Christendom, the melding of church and state, instituted after Constantine’s conversion, didn’t just make for bad government. It was bad for Christianity.

A more correct stance of the church in relation to the state is “Resident Alien,” as spelled out in Stanley Hauerwas and William Willimon’s classic book. They argue that we are aliens living in a foreign land, and our true and first allegiance is to Christ, not the state. The pre-Christendom church is our model, a church that lives, as Lesslie Newbigin articulated, as a sign of the kingdom.

Our calling is to faithfulness, not domination. Hence the term “Moral Majority” has something inherently wrong built into it. We are called to the sort of humble life Jesus sketched out in the Sermon on the Mount, not domination of our culture through flexing our lobbying muscles. Moral Majority quickly slides into self-righteous superiority, which becomes a counter-Christian witness. And before those of you on the left get too excited, do you have any idea how condescending and self-righteous you also can be?

The impulse to marry church and state in America denies the intent of our nation’s founders. They saw the excess and deprivations of Europe and were bound not to repeat them. But over recent decades, Evangelical Christians have become such a political force that for better or worse (and I would argue mostly worse) every modern President is compelled to declare his faith, whether or not he has one. In the past, Presidents were often more devout than they appeared. In our current presidency, we are living through the logical culmination of the flipping of that script.

No Presidents have had stronger evangelical bona fides than Jimmy Carter and George W. Bush. They are both lovely, sincere Christians. I would enjoy being in a Bible study with either or both of them. I (naively, hopefully) voted for each of them because of their faith. And each of them, in their own way, was a failed President.

Christian Nationalism leads to the embrace of a culture war. Can we renounce that image? Can we begin by acknowledging it is a militaristic and violent image that doesn’t help our cause? (While we’re at it, can we do something about the term “prayer warrior”?) James Davison Hunter of the University of Virginia coined the phrase “culture war” in 1991 to describe new fault lines he observed in religious groups. Instead of fighting each other, they had turned on themselves. In 1992, “culture war” became a partisan weapon wielded by Pat Buchanan in a speech before the Republican National Convention. “There is a religious war going on in this country,” Buchanan said. “It is a cultural war.”

Of course, Buchanan was onto something. There is a huge cultural rift in America, a divide that has doomed us to make every issue partisan. Things that really shouldn’t be partisan like racism, police reform, the coronavirus, climate change, sexism, health insurance, mass incarceration, and LGBTQ rights, have become cultural flash points. We can’t talk to each other about these things. Abortion led the way a few decades ago, but many other issues have joined the mix. For example, can we talk reasonably and sanely about gun reform or the idiocy of self-styled white “patriots” keeping the peace with their automatic weapons? No, we cannot.

Why was the Facebook feed of all my right-leaning friends silent following the death of George Floyd? Can’t one of you say, “that was wrong”? Are you in favor of lynching when it’s done by the police? At the same time, why can’t anyone on the left acknowledge that calling abortion “reproductive rights,” uses language to euphemize death along the same lines of calling a bomb a “peacekeeper missile”?

There is a problem at play for Christians on the left and right much bigger than any particular issue. The problem is ideology has become idolatry. Partisanship has replaced a living faith and experience of the living God. Instead of embracing God in worship and experiencing God in the sacraments, we believe we can find salvation by stocking the Supreme Court and getting Roe v. Wade overturned or, on the other hand, joining the Paris Climate Agreement. Neither will deliver us.

I believe we should be politically active. But my hope is not in politics. I believe the current occupant of the White House is a narcissistic, pathological liar who should be swept out of office. But I don’t think dumping Trump will deliver eternal salvation. He may well win another four years. What then? What if we thought and talked about Jesus as much as we think and talk about Trump?

The relationship of church and state is complicated and nuanced and we don’t have room to fully explore it. But the Fourth of July is coming soon, and, if nothing else, I’d like to ask you to pay attention to the strange mixture of American civil religion that will be on display. Ask yourself, where is my first loyalty? In what or whom do I really trust?

And, while you are at it, please pray something more thoughtful and theologically sophisticated than “God Bless America.”