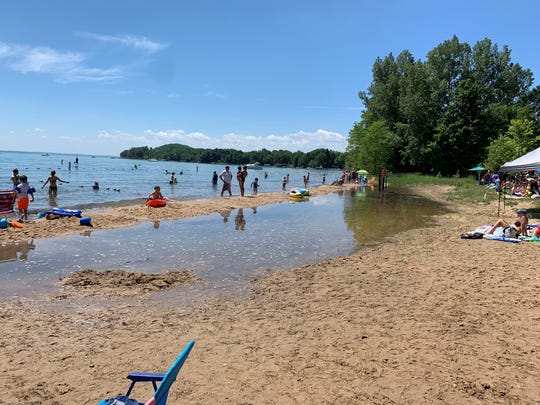 Geological Taxonomy from a Seven-Year-Old

For the past fifteen years I have enjoyed the good fortune of living on Lake Michigan’s eastern shore, in the home where my children formed some of their happiest memories decades ago visiting their grandpa and grandma.

Now it is my son’s turn to bring his daughters to enjoy beach walks, hikes in the woods, and paddling in the waves for a week or two each summer. Several years of rising lake levels now threaten the dunes and the houses atop them, but we hope someone will soon find the drain plug that will bring water levels back to normal.

In a recent visit, when my older granddaughter was seven years old, a storm covered the normally sandy beach with an array of small stones of every hue and shape. For the next few days, three generations of the family walked up and down the beach with buckets, collecting the most colorful and unusual among these gifts of the lake, before the waves could bring more sand to cover them all.

And then my granddaughter set out to sort and categorize her treasures. What my wife and I saw – with our rudimentary knowledge of geology – were bits of granite and schist and quartz, lots more pieces of rock that we could not identify, and a few limestone pieces with the imprint of ancient organisms. But our eyes were far less discerning and less creative than those of a seven-year-old.

Aristotle, the father of Western metaphysics, discerned in the entire cosmos an orderly differentiation into natural kinds, animal, vegetable and mineral. Carl Linnaeus, the father of modern taxonomy, devised the Latin names still in use for the plant and animal kingdoms. Geologists of the 18th and 19th centuries distinguished three major categories of igneous, metamorphic, and sedimentary rocks. The taxonomies devised by these wise and careful observers still serve us well for many purposes.

A seven-year-old not yet trained in scientific classifications, but closely attuned to the meaning of what she finds and examines, sees the world differently. Some stones are flat. Others are smooth. Some contain sparkly crystals. Others have unusual shapes.

And then there are categories that demand more than mere observation, with properties that arise from, yet are not strictly constituted by, physical characteristics. There are stones with special markings that we can call the patterned stones, unless the pattern resembles a living organism, which qualifies them for the fossils group. And there are stones that, in this context if not in others, can be classified as big stones.

All stones exhibit one color or another, of course, but some stand out for their color. We can classify them as colored. Of others, the principal characteristic that strikes an investigator’s eye is their shape. These are the shaped stones. Unless they are much wider than their height, in which case the proper designation is flat stones.

And then there are cool stones. Just look at them – who could dispute the classification!

This set me wondering how the Creation narrative of the first chapter of Genesis might have changed if the ancient Hebrew scribe who recorded it for posterity had enjoyed the assistance of a seven-year-old. The account of God’s activity on the third day (Genesis 1:9-10) might have read something like this:

And perhaps the story of the fifth day (vs. 20-21) might also have been enriched along these lines:

Maybe not every second-grade girl would have put in the line about insects, but for the one with whom I am best acquainted they are one of the world’s principal sources of fascination and delight.