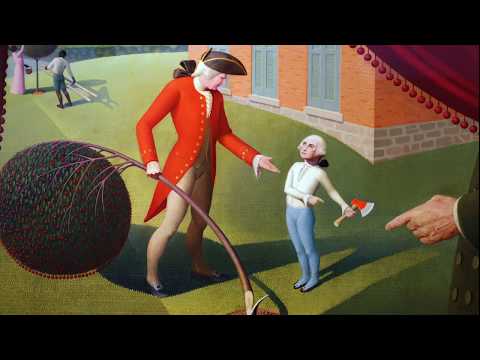 Donald Trump in front of a church with a Bible in his hand Monday night got me thinking about George Washington.

Perhaps you’ve heard the stories about Washington’s piety. There are accounts that portray him as a fervent Christian holding communion services before battles, visiting rural churches and inspiring their faith, retiring to the wilderness to pray, and spending nights in humble lodgings in prayer.

He also chopped down a cherry tree.

The cherry tree story was the wholesale invention of Mason Locke Weems—Parson Weems—whose life of Washington, written a few years after the great man’s death, was early America’s most beloved book. In addition to creating the cherry tree story out of thin air, Weems invented the piety stories. Weems had an agenda that reality didn’t fit, so he invented new realities. One might call these stories alternative facts.

Washington, a man of his times, certainly believed in God, but he was no evangelical. For example, he never took communion. After hearing a sermon aimed at those in elevated positions skipping the sacrament, Washington was convicted. He responded not by going to the table but by avoiding church altogether when communion was served. His wife Martha faithfully took communion, but he didn’t, most likely because he didn’t believe in it. He rarely mentioned Jesus Christ. He never spoke of things like salvation or forgiveness. When he spoke of God, he spoke of the “Grand Architect,” “Providence,” and the “Supreme Being.” He was, like the other leading lights of the Revolution, heavily influenced by the Enlightenment and as a result more deist than orthodox Christian.

However, a pious evangelical George Washington was a better story that made people feel good. He’s even painted ascending into heaven inside the Capitol dome. This saintly character was revived a couple decades ago by evangelicals whose Christian Nationalism led them to lay claim to the Founders in order to paint America as the new Israel, a City on a Hill, and the Light of the World. George Washington was appropriated by religious people for the theocratic purposes of a misguided civil religion.

Monday evening the script was flipped.

“Is that your Bible?” a reporter asked.

“It’s a Bible,” the President answered.

The whole thing was a photo op. The President wanted a different image after reports surfaced that he’d spent the previous nights sheltered in an underground bunker while protests went on outside. The President holding a Bible he doesn’t read (it’s not just the Bible, he doesn’t read any books) in front of a church he doesn’t attend (with “All Are Welcome” on the sign behind him) played to his base, and the base loved it. Social media lit up Monday night with Trump supporters calling it the greatest moment in American history.

On the other side, posts raged, calling it a mockery and the President “the desolating sacrilege,” “Nero,” and “the antichrist.”

His defenders ask, “How do you know he wasn’t sincere? Only God knows the human heart.”

Is there any hope for Christian unity between these poles? I will address that below, but first a word about the President’s heart. The man has opened his mouth and let his fingers tweet enough that we do have a pretty good sense of his heart.

This is someone who praised the Chinese government for their show of force in Tiananmen Square. That’s the playbook he’s following now, not the Bible.

This is the person who took out full-page newspaper ads calling for the death penalty for the later-proved-innocent Central Park Five.

This is the husband and father who repeatedly bragged to Howard Stern about his infidelities, talked sexually about his daughter Ivanka’s body, and told of walking backstage at the Miss Universe pageant so he could see the contestants naked.

This is the leader who took a Sharpie to a weather map for the sake of his ego.

Let’s not forget the “very fine people on both sides” in Charlottesville.

Or the easily disproved claims that his inaugural crowd size dwarfed Obama’s.

Or the obsession that there was massive voter fraud after Hillary Clinton beat him in the popular vote.

Or the silly claim that there were “thousands” in the lobby of Trump Tower to see him launch his presidential campaign when actually a few dozen reporters and people who had been paid $50 to attend had gathered. You remember that day. He said the Mexican government was sending rapists into the US.

This is the man who kept the birther story about Barack Obama alive.

Let’s not forget his work in professional wrestling.

Or the recent slanderous claim that Joe Scarborough murdered someone.

At the end of May, fact checkers had totaled 19,127 false and misleading claims made by the President. The lies and outrageous behavior come so fast there’s no time to comprehend, let alone react, to them.

We know his heart. We know it all too well. No one is going to use words like joy, peace, patience, gentleness, kindness, or self-control to describe him. That’s not to say he doesn’t believe in God or have some sort of fledgling Christian faith. I don’t know. What I do know is what he says and does.

That Was an Unfortunate Stunt

I have long identified as an evangelical and understand the evangelical support of Trump. What I cannot understand is the George Washington-esque projection of him as a religious figure. Why does that matter? As in the case of Washington, there’s civil religion at work here. Christian Nationalism. The path to unity, at least for the church, is a denouncement of Christian Nationalism as heresy. That’s another post for another day, but Hauerwas and Willimon got it right with Resident Aliens.

As for Trump, unity could begin when his supporters admit they support him because he aligns with their political agenda. He’s delivered conservatives on the Supreme Court and battled the left. 401k accounts have zoomed.

Can we drop the religious charade? If we could give up Christian Nationalism, we could then give up the need to cast disparate figures from George Washington to Donald Trump in our own image. Trump, like Washington, may indeed believe in God, but, also like Washington, he understands very little of Christianity, including, by his own admission, the need to ask for forgiveness.

Why can’t we just accept him as he is? He is not a beacon of virtue. He’s a deeply flawed person whose faults are laid bare for everyone to see most every day.

The United States is not the country we want it to be. Many actors are responsible for that reality, but, as a result of his divide and conquer political strategy, the resident of 1600 Pennsylvania Avenue bears most of it.

How I wish just one Trump supporter would say, “that was an unfortunate stunt,” about Monday night instead of defending it as some sort of act of Christian devotion.