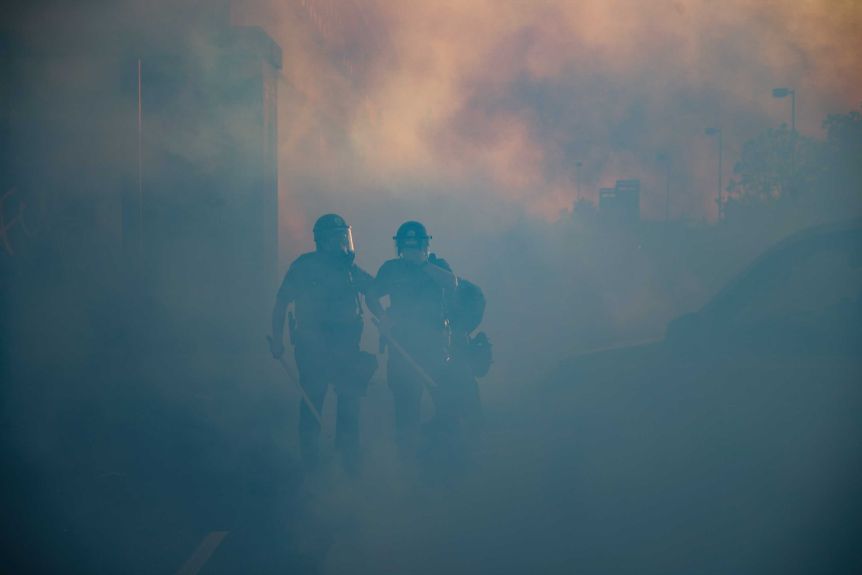 Today is not the day for my words.

Dear world, listen to the uprising. Our babies are speaking to you. – Lisa Sharon Harper

It’s natural to wish for life “to just get back to normal” as a pandemic and economic crisis upend everything around us. But we have to remember that for millions of American, being treated differently on account of race is tragically, painfully, maddeningly “normal”—whether it’s while dealing with the health care system, or interacting with the criminal justice system, or jogging down the street, or just watching birds in a park. This shouldn’t be “normal” in 2020 America. It can’t be “normal.” If we want our children to grow up in a nation that lives up to its highest ideals, we can and must be better. – Barack Obama

When you mourn the destruction of property over the execution/murder/Lynching of a human being it demonstrates that black life is not valued. – Otis Moss III

How long must I wrestle with my thoughts
and every day have sorrow in my heart?
How long will my enemy triumph over me? Ps 13:2

You know why it’s so hard to get so many to take Jesus seriously? Because so many only call on his name from a safe distance as a moralising judgment against the responses of the oppressed WHILE BEING ABSENT FROM THE FRONTLINES TO CHALLENGE OPPRESSION. – Jarrod McKenna

Large segments of white society are more concerned about tranquility and the status quo than about justice, equality, and humanity…. [O]ur nation’s summers of riots are caused by our nation’s winters of delay. – MLK, “Other America” (1967-68)

This is domestic terrorism aimed at Black people. There is no other way to define it. – Austin Channing Brown

Please make sure to include black women in your narrative & justice advocacy. Our gender has not lessened our exposure to police brutality or white supremacist violence. – Kathryn Freeman

The wicked freely strut about when what is vile is honored among men. Ps 12:8

But it is not enough for me to stand before you tonight and condemn riots. It would be morally irresponsible for me to do that without, at the same time, condemning the contingent, intolerable conditions that exist in our society. – MLK, “The Other America” (1967-68)

To be a Negro in this country and to be relatively conscious is to be in a rage almost all the time. – James Baldwin (1965)

I would not have you descend into your own dream. I would have you be a conscious citizen of this terrible and beautiful world. – Ta-Nehesi Coates, Between the World and Me (2015)

My heart is in anguish within me;
the terrors of death assail me. Ps 55:3

It began to seem that one would have to hold in the mind forever two ideas which seemed to be in opposition. The first idea was acceptance, the acceptance, totally without rancor, of life as it is, and men as they are: in the light of this idea, it goes without saying that injustice is a commonplace. But this did not mean that one could be complacent, for the second idea was of equal power: that one must never, in one’s own life, accept these injustices as commonplace but must fight them with all one’s strength. – James Baldwin, “Notes of a Native Son” (1955)

Maybe one day racism will kill me, too. By sitting on and breaking my neck. Or by a thousand deaths a day as I am reminded over and over that they are allowed to treat me like I ain’t shit. – Zakiya Jackson

Here now is the man
who did not make God his stronghold
but trusted in his great wealth
and grew strong by destroying others! Ps 52:7

But all our phrasing—race relations, racial chasm, racial justice, racial profiling, white privilege, even white supremacy—serves to obscure that racism is a visceral experience, that it dislodges brains, blocks airways, rips muscle, extracts organs, cracks bones, breaks teeth. You must never look away from this. You must always remember that the sociology, the history, the economics, the graphs, the charts, the regressions all land, with great violence, upon the body. – Ta-Nehesi Coates, Between the World and Me (2015)

Vindicate me, O God,
and plead my cause against an ungodly nation;
rescue me from deceitful and wicked men. Ps. 43:1

We have yet to look upon Emmett Till’s face. No apocalyptic encounter, no ritual unveiling, no epiphany has freed us. The nightmare is not cured. I cannot wish away Emmett Till’s face. The horrific death mask of his erased features marks a site I ignore at my peril. The site of a grievous wound. A wound unhealed because untended. Beneath our nation’s pieties, our self-delusions, our denials and distortions of history, our professed black-and-white certainties about race, lies chaos. The whirlwind that swept Emmett Till away and brings him back. – John Edgar Wideman, “Looking at Emmett Till” (2005)

Strangers are attacking me;
ruthless men seek my life—
men without regard for God. Ps 54:3

So I feared not just the violence of this world but the rules designed to protect you from it, the rules that would have you contort your body to address the block, and contort again to be taken seriously by colleagues, and contort again so as not to give the police a reason. All my life I’d heard people tell their black boys and black girls to “be twice as good,” which is to say “accept half as much.” These words would be spoken with a veneer of religious nobility, as though they evidenced some unspoken quality, some undetected courage, when in fact all they evidenced was the gun to our head and the hand in our pocket. This is how we lose our softness. This is how they steal our right to smile. – Ta-Nehesi Coates, Between the World and Me (2015)

Why do you hide your face
and forget our misery and oppression? Ps 44:24

In this place, I see the sun setting behind me, its light as far away as the stars, and I let the limitations of hope settle over me. I possess not the strength of hope but its weakness, its fragility, its ability to die. Because I must demand anyway. It is my birthright. It is the culmination of everything my ancestors endured, of all that my parents taught me, of the Blackness that rescued me. How dare I consider surrender simply because I want the warmth of the sun? This warmth has not been promised to me. My faith does not require it.” – Austin Channing Brown, I’m Still Here (2018)

We are brought down to the dust:
our bodies cling to the ground.
Rise up and help us:
redeem us because of your unfailing love.  Ps 44:24

A moving composition, suitable listening for a time of grieving and lament: “Seven Last Words of the Unarmed” by Joel Thompson.

This is a helpful resource: “75 Things White People Can Do for Racial Justice.”

Thanks to all the people whose voices are represented here. Thanks to John and Charlotte Witvliet for sharing the last two links.