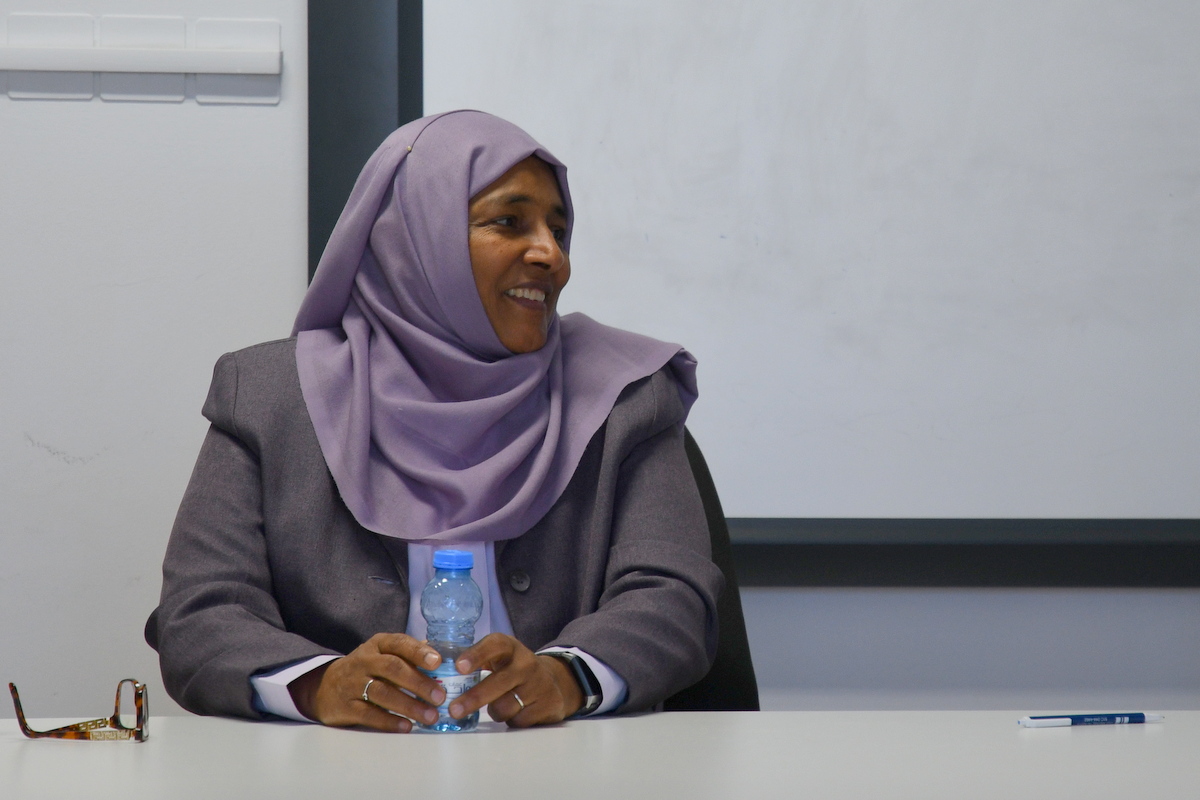 A Pioneer for Women & Children in a Muslim Sultanate

As Islam around the globe marks the month-long fast of Ramadan in this strange time of pandemic – no gathering for prayers in the mosque, no one but family around the table for the iftar meal — my thoughts go back to some of the remarkable Muslim leaders and activists that my wife and I met in a three-country journey early in 2020.

One of those, whose brief conversation with a delegation from the Christian Reformed Church in North America was shoehorned into a very busy day, was Sabah Mohamed al Bahlani in Muscat, Oman. Muslim by birth and by present practice, like nearly all Omanis, Sabah told us of her happy childhood as a pupil at Al Amana School, a Christian school that served children of all faiths.

“I remember that we had many debates about Christianity and Islam,” she said. “But as Muslim children we always felt that we belonged there too, and no one tried to convert us.”

The school was founded in 1931 by missionaries from the Reformed Church in America, carrying on a Christian presence that began in the 1890s with the founding of a hospital. The Omani government took responsibility for the hospital in the 1970s, and the school closed in the 1980s.

The work of the churches continues at Al Amana Centre, dedicated to promoting interfaith dialogue. Visiting groups come from North America and Europe to learn more about Islam, and the Centre also hosts Muslim and Christian leaders from regions of Africa and the Middle East who cannot talk to each other safely at home.

Sabah welcomed us to the offices and classrooms of an organization she founded, the Association of Early Intervention for Children with Disabilities. The walls of its rooms and hallways are brightened by paintings made for, or made by, the 130 children who attend classes. Therapists and teachers offer testing and home visits for many more who cannot come to the school.

The government of Oman is a hereditary sultanate, ruled by members of the al Said family since the 18th century, that stands out in the Persian Gulf region for its commitment to religious toleration and openness. The Education Ministry was slow to recognize the need for services to the disabled, Sabah told us, and until recently most special needs children in Oman were hidden away and isolated by their families. Today, however, the need for education suited to their needs is widely recognized, and there are teachers and trained staff serving the deaf and the cognitively disabled in dedicated classrooms in every region. Although she did not claim credit, it became clear that no one has done more to achieve this result than Sabah.

Sabah studied health education in the United States, where she was able to observe public health and special education programs. Returning home after completing her doctorate, she served for 27 years in the Ministry of Health, traveling to villages to assess and improve health opportunities for women, always looking for opportunities to share what she had learned with educators in rural Oman. A few years ago she retired from government service to engage in full-time advocacy, teacher training, and administrative work for the disabled.

“Our program is the program that I observed in Portage, Wisconsin,” Sabah told us, and it offers classroom instruction for those able to take part and regular home visits for others. “We have 45 employees, 10 of them having specialized training in teaching children with disabilities. We serve all children, regardless of religion or national origin – so long as they can understand Arabic.”

Oman is an overwhelmingly Muslim country, but its economic success rests heavily on the shoulders of guest workers, mostly from Bangladesh and other regions of South Asia. Teaching children of guest workers and children of ethnic Omanis together in one classroom is a bold and progressive policy.

“Some of the problems I saw with the disabled in America do not occur here,” she said. “Parents often see a child with special needs as a gift from God, to test their faithfulness. There is shame, but there is very seldom any sign of abuse.” At one time the mufti of Oman, the highest authority for Ibadi Muslims, said that zakat, the alms that every Muslim who is able must give each year to the less fortunate, is intended for the poor, not for the disabled. “Fortunately he has changed his mind,” said Sabah.

The welfare of children and of women is closely intertwined, said Sabah, and conditions have improved dramatically for both in recent decades. “Sultan Qaboos insisted that women be given equal consideration for university study, and they now make up 60% of the student body. Our medical schools have had to set a quota to be sure that we are training enough men!”

At the beginning of the Sultan’s reign in 1970 only 10% of births occurred in hospitals; today that figure is 96%. “The government sends helicopters to remote villages to carry women to hospitals for delivery. The helicopters also deliver vaccines.” In 1970 there were only three schools in all of Oman, all reserved for boys. Today there are government schools in every village, and Omanis enjoy free education from age 6 through university.

The Sultan had passed away just a week earlier after a long illness, and the country was still observing a period of mourning. In fifty years as the nation’s absolute monarch, he had brought Oman out of poverty and feudalism and created a thriving modern state – a path made possible by newly discovered oil deposits. Muslims of all traditions are expected to worship together. Christians are provided land to build their churches and granted broad freedom so long as they do not seek to proselytize others. It is a dramatically different society from most of its neighboring Muslim oil states.

Sabah is a member of the State Council, a body appointed to assess proposed laws and policies. But only the Sultan can enact laws, and only the royal family can select a successor. Within a few days of Sultan Qaboos’s death, his cousin Haitham had been selected and installed in office. He is expected to follow in his predecessor’s path of economic and religious openness and generous support for education and health care.

So much that we saw here has a paradoxical ring in Western ears: a Muslim autocracy that upholds religious freedom; a nation that has progressed from just three primary schools for boys half a century ago to free higher education for all; a longtime government official in a Middle Eastern oil state who is a tireless advocate for women, children and the disabled – and who speaks of how much she gained from attending a Christian school. Such paradoxes are food for thought, for Christians and others, in the month of Ramadan.