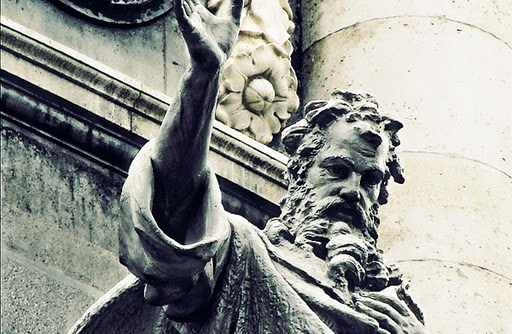 Let’s start with a question that Jesus posed to many of us this past week in worship: “Have you believed because you have seen me?” (John 20.29). Jesus follows up that question by blessing those who have not seen and yet believed. However, as is well-known, Paul mentions that “now we see in a mirror, dimly, but then we will see face to face” (I Corinthians 13.12). So, belief or faith, is also a kind of sight. Why does Paul bother with such a claim?

Irenaeus argues – on the basis of the prologue to the Gospel of John (“in him was life and that life was the light of all people”) and other places – that “the manifestation of God which is made by means of the creation, affords life to all living in the earth.” In other words, the fulcrum of human life, and all creaturely life, is that God shows God’s self to us.

We are alive because God manifests God’s self. If we don’t see God, then eventually we will die. God became human so that we could see God, and thus be, in Irenaeus’ words, fully alive.

Hans Boersma’s recent book, Seeing God, helped me recognize more fully that “seeing God is the purpose of our life.” Boersma revisits a panoply of thinkers, from Irenaeus and Gregory of Nyssa to Symeon the New Theologian and Abraham Kuyper. The Reformed tradition gets special attention, with John Calvin and Jonathan Edwards appearing as particularly helpful.

In the final chapter, Boersma puts forth his own unique contribution to this doctrine, often called the doctrine of the beatific vision. In the next life, will we see God in God’s essence or is that saying too much? Yes, for Boersma, we see into God’s essence, God’s being.

What about now? Do we see God in God’s essence even now? For Boersma, yes. As he puts it, “When by faith we are united to Christ, we already participate, in a proleptic way – sacramentally – in the beatific vision.” Those united to Christ live a fully human life because they can see, with a kind of spiritual perception, God as God is invested in Christ. Boersma is not describing beliefs we have about God; he’s talking about a perception of God expressed in the metaphor of sight. To be a Christian is to see God in this life and in the next.

But, Boersma points out, in modernity and postmodernity, purposes are what human beings assign to themselves and things around us. In modernity and postmodernity, purposes are made, not found. We can intellectually shop for purpose. We are skeptical about the idea that purposes are in things and make things what they are. Thus, we will resist the beatific vision because we are skeptical about purposes being anything other than what we assign to ourselves or others.

That answer is, in our commodified world, fairly flimsy. It is a kind of paper belief. We probably would not feel the need to protest the felling of a live tree if it was in the way of a new road.

As Boersma writes, “whenever we see truth, goodness, and beauty, it is as though the eschaton comes cascading into our lives and we receive a glimpse of God’s beauty in Christ.” If a live pine tree is meant to glorify God in Christ in its beauty, cutting it down would be a very serious matter and should be done only in prayer and fasting. In prayer we might address trees, asking them to praise the Lord. But, most of the time, trees have purposes that we assign to them. Most of the time, we act as though the final purpose of trees is recyclable paper.

For Boersma, the skepticism about final ends also seeps into modern academic theology. For example, he calls out Hans Urs Von Balthasar, a twentieth century Catholic theologian, and Herman Bavinck. For Boersma, Von Balthasar and Bavinck affirm the beatific vision but do not describe it. Why do they do this? Boersma writes that “both prioritized the elements of communion, activity, and perhaps creativity as central to life in the eschaton . . . by highlighting the social, dynamic and active character of the eschaton, both ended up with a remarkably this-worldly eschatology.”

Although I’m convinced by Boersma here, his account could use something more than an intellectual history. I have recently read Mark Charles’ Unsettling Truths with a group of students. It makes me wonder if the culture of colonization – as channeled through something like the Doctrine of Discovery, Manifest Destiny, and other false hopes – also plays a role. In part, we are skeptical about final purposes inhering in things because we are so shaped by cultural and political practices that form us into treating our world and our neighbors as something we need to control.

Also, after reading Boersma, I did a kind of inventory of my own education and teaching. In my experience, contemporary Reformed piety and theology emphasizes the resurrection, the new heavens and new earth, and the continuity of the new creation with the old. I have never heard a sermon addressing the beatific vision, the blessed sight of God. Until recently, I cannot remember spending significant time as a student and teacher at multiple Reformed colleges and seminaries in the Dutch Neo-Calvinist world considering the beatific vision (I have a memory of it coming up once in class, very briefly). That goes for my own teaching as well. For some, it might even sound like theological trivia. There is some sadness in that for me.

Our hope is not first that we would be able to paint or build or write with new freedom and glory. The core element of our hope for ourselves, for each other, and for all of creation is that God can and will be seen in Christ by the power of the Spirit.

Concomitant with that hope is a way of being that experiences all creatures – human and non-human alike – as sacred vistas into the Triune God. Accompanying that experience is the outpouring of love on those we encounter as such. On second thought, maybe that does have something to do with our struggle with this novel coronavirus. At least, I hope so.