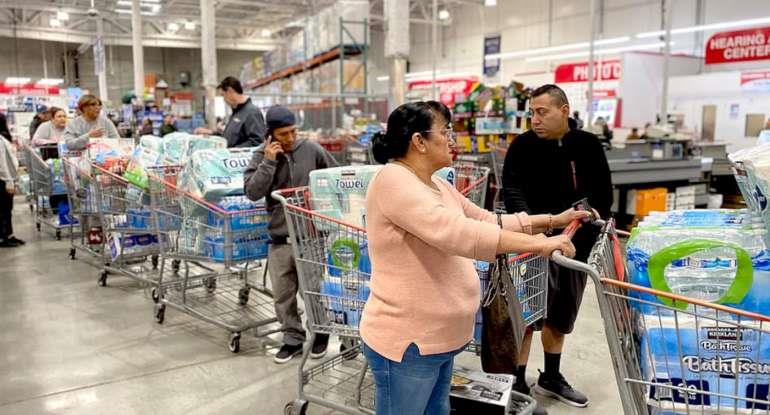 Why Hoard Toilet Paper During a Pandemic?

In the moments I’m not self-righteously clucking “tsk, tsk,” at the toilet-paper-hoarding masses, I’m doing mental math estimating how long our supply might last. We’re starting to run low, the stores are empty, and I am anxious. If something doesn’t change soon . . . well, I don’t know what we’re going to do. If I had the chance, I’d buy a lot of toilet paper right now.

If you’re puzzled about hoarding, anxiety explains it.

We can’t see the Corona virus finish line. We don’t know if we’ll need a spare 10, 30, or 100 rolls. Better to have 100. Then we’ll feel most secure, most in control of the uncontrollable. Uncertainty produces anxiety and anxiety produces coping behaviors meant to create a sense (albeit illusory) of control.

This is a complicated time and we’re experiencing complicated emotions. A friend suggested she was going through the five stages of grief and I found resonance with that. It’s hard. Depressing. People are being people—some doing miraculous things and others shamelessly behaving like pigs. We would do well to stock up on love, compassion, and empathy. But we’ve stocked up on toilet paper instead.

Love, compassion, and empathy are hard. Toilet paper is simple.

Why toilet paper? What is it about that particular product that pushes our psychological buttons? After all, as many have observed, this makes no sense. COVID-19 is a respiratory, not digestive, illness. And is hoarding toilet paper just an American thing or is it happening around the world?

Since this is a global pandemic, I reached out to some friends around the world to gain perspective.

Sergio and Roselie Murru live in Belgium. She’s an American who has never lived in the United States (except for college). He’s a Sardinian who has never lived in Sardinia. They report that hoarding was an early response to the virus in Belgium, and, like here, people went for toilet paper. The issue was exacerbated by media reporting, which created more panic buying, but was eventually quelled by that same media showing footage of warehouses full of the coveted rolls. The perception of scarcity vanished, and so did the hoarding. Interesting, I thought, that toilet paper hoarding wasn’t just an American phenomenon. And interesting that their media quenched the panic they’d helped create.

I checked in with Carol Bechtel, a Western Theological Seminary faculty member, doing a sabbatical right now in, of all places, Italy. She is healthy and safe in Rome, at a distance from the epicenter of the Italian breakout. She said the Italians have not hoarded toilet paper. They have been hoarding, however. Perhaps stereotypically they’ve hoarded pasta.

I also reached out to Rowland Van Es, an Reformed Church missionary serving in Kenya (and a faithful reader of The Twelve), asking about hoarding through African eyes. He said those with the wealth to hoard in Kenya have hoarded (mostly hand sanitizer) but that’s only a small minority of the population.

Millions of Kenyans live on less than $90 a month and simply lack the wealth to hoard. And hoarding toilet paper hasn’t occurred to the masses because less than 20% of the population has a toilet. The lack of water access means the great majority of the population either uses an outhouse or the great outdoors. Many people clean themselves using their left hand.

Rowland writes: “I think Africans and others in the majority world are more used to dirt (human waste in particular) and also more used to their lives being outside of their control . . . Africans and the poor and others in the ‘South’ live one day at a time since that is all they can plan for. ‘Give us this day our daily bread’ is their reality. Only 15% here have formal employment, 85% are self-employed farmers, etc., or work in the ‘informal’ sector. They have low wages, no job security, and there is no unemployment insurance. Those who don’t work, don’t eat. It is a pretty precarious existence.”

It’s a big world and those of us whose present hardships come from being with our family all day, making our meals at home, and running the dishwasher often have a lot to be grateful for.

We live in ways alien to vast numbers of people. I had never thought much about our discomfort with dirt until I read Rowland’s words. The wealthier you are; the less dirt you tolerate. The wealthier you are; the more likely it is that someone lower on the socioeconomic scale regularly removes dirt for you. I never thought of my toilet as a sign of affluence, but it is. It takes wealth to put in indoor plumbing and the magisterial comfort of a toilet.

And let’s face it, there’s no toilet paper like American toilet paper. I’ve lived overseas and in my travels have encountered options from wax paper to sandpaper. This is a true case of American Exceptionalism. Our toilet paper is the best.

We use it to clean ourselves after our most unpleasant bodily function. What is excrement? Waste. Human dirt. Decay. An actual part of us, made by our bodies, that disgusts us. A foreshadowing of death. So we flush it and forget it and pamper our bums in the process.

The wealthier you are, the less you have to face this reality. If you’re using an outhouse, your human waste, your human dirt, doesn’t really go away. It molders and reeks, just like your body will someday. If you’ve got the money, you get rid of it. Most people in the world don’t have the money.

Don’t get me wrong, I’m all for the hygienic benefits of modern plumbing. A few years ago we visited an African village. There was an outhouse, a flimsy structure with a corrugated metal door haphazardly fastened to it. No way was I “going” in there. Others in our group (Americans, Canadians, and a couple from New Zealand) had more urgent needs. Our African host knew who he was dealing with and magically produced a roll of toilet paper to cries of delight.

None of us thought to ask what they did when people like us weren’t around.

We have done our best to distance ourselves from the elemental. As an aside, I might note this is one of the challenges we have with reading the Bible today. The people inhabiting the pages of our holy book lived a lot more like the folks Rowland is referring to than you and me. We can’t feel God shaping Adam out of the dust or Noah’s flood or parables about types of soil and mustard seeds or, as Rowland points out, “give us today our daily bread,” in our bones the way they can.

What we do feel is the need for comfort and control. A deadly virus lurks unseen and is both unpredictable and unrelenting. We’re disrupting our lives trying to stop it.

Before we took any social distancing steps, we took other steps to protect ourselves, steps not recommended by health care experts or governmental officials. We could feel the world changing. We anticipated things might never be the same.

We didn’t think “We’ve got to stay six feet away from everyone.” Instead, we thought, “We better get a six-month supply of toilet paper.” We protect ourselves any way we can.

A stash of toilet paper won’t shield us from death. but it will protect us from the visible reminder of death and decay our bodies produce, which is the next best thing.