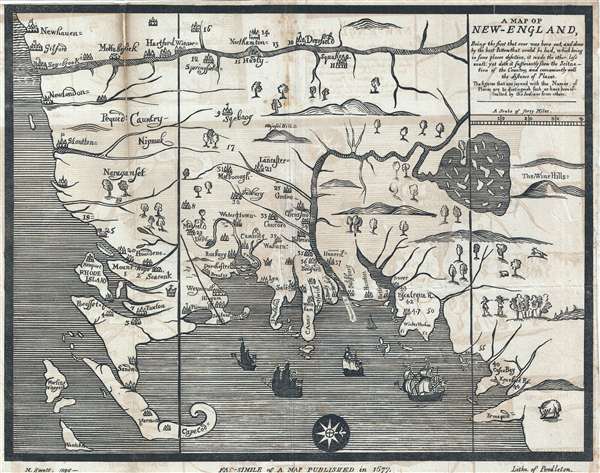 Before my last semester of full-time college teaching was derailed by a virus, I had been teaching – for about the fortieth time – my course on American Religious Thought to a lively class of undergraduate students at Central College.

That means forty discussions of Harvard historian Perry Miller’s classic 1948 essay, “Errand into the Wilderness.” Miller explored the covenantal ideas behind the English Puritan settlement of the Massachusetts Bay colony in the 1630s, ideas that ultimately shaped not just the consciousness of a colony, but that of a nation. He pointed in particular to a lay sermon preached by John Winthrop aboard the Arabella en route to the New World, entitled “A Modell of Christian Charity,” as a kind of programmatic statement of intent by the Puritan leaders of the colony.

In that sermon, Winthrop cited the powerful metaphor used by Jesus in the Sermon on the Mount: “You are the light of the world. A city on a hill cannot be hidden” (Matthew 5: 14). If we fulfill the terms of our covenant with God, Winthrop argued, by establishing a new society in the wilderness according to the pattern laid out in Scripture, “we shall be as a city on a hill,” a model for England and the world to follow. If on the other hand we betray the covenant by pursuing our own selfish designs, we will bring down upon ourselves divine judgment that will be equally visible to the world. In any case, Winthrop urged, we are committed – there is no backing out of our covenant obligations, our exceptional destiny.

In his newly-published book, City on a Hill: A History of American Exceptionalism (Yale University Press, 2020), Abram Van Engen argues that Perry Miller not only charted the history of American exceptionalism but actually shaped it, by resurrecting Winthrop’s hitherto obscure sermon as a founding document of American civil religion. In the process, he unleashed the “city on a hill” as a political metaphor, one that would be exploited by politicians and pundits over the second half of the 20th century, most notably by Ronald Reagan.

Ironically, in Van Engen’s telling, it was often employed in a sense very different from Winthrop’s (and Miller’s) intention: not as pointing toward future ideals to be achieved, but rather toward present achievements to be celebrated. Hence, the potentially prophetic edge in American civil religion was blunted in favor of smug entitlement.

Have we reached an end-point on this path of uncritical America First-ism, insisting on special treatment within the community of nations while abdicating responsibility for sacrificial service to any cause larger than our own short-term prosperity? The official White House response last year to the grisly murder of Washington Post journalist Jamal Khashoggi by assassins connected to Saudi crown prince Mohammed bin Salman might suggest as much. In place of JFK’s inaugural boast that “we shall pay any price, bear any burden, meet any hardship, support any friend, oppose any foe, in order to ensure the survival and success of liberty,” DJT’s statement on the Khashoggi case simply notes that the Saudis have a lot of oil and buy a lot of military hardware from us, so . . . never mind.

Of course, Kennedy-esque idealism had its dark, hubristic side. It brought us the Bay of Pigs, the Vietnam War, and some Great Society over-reach, in addition to the Peace Corps, civil rights progress and Medicare. Sometimes it has served as a convenient cover for self-interest, or tempted us to ill-considered ventures.

Yet, if we abandon the idealism while holding on to the exceptionalism, what remains of the city on a hill beyond a blight on the landscape? How do we find the right balance between gratitude and repentance, between “God bless America” and “God mend thine every flaw?”

Like many others, we will be finishing our semester via “remote instruction.” We’ll see how that works. But I would have enjoyed discussing those issues face to face with my students after reading Lincoln’s profound Second Inaugural Address, or Rev. King’s “I Have a Dream” speech. Who today gives voice to the prophetic strain of civil religion that they represented so eloquently, uniting a deep love of country with a clear moral vision for its future?

How can we thread the needle between divinizing our nation and demonizing it? Maybe remote instruction will work technologically in an epidemiological pinch; but the issues are not at all remote. They go to the heart of who we are, and what we will become.