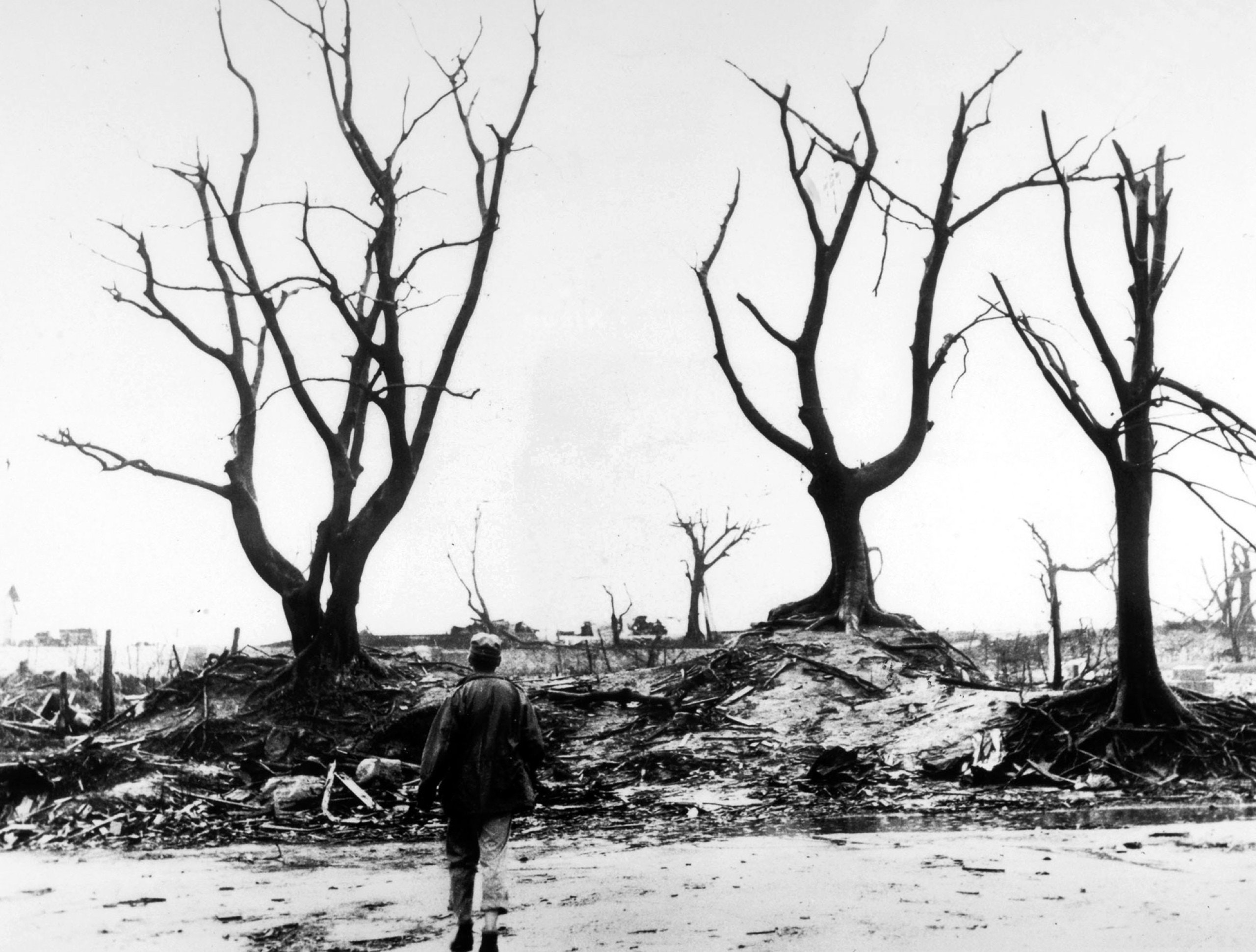 Toshiko Sasaki worked as a clerk at the East Asia Tin Works factory. She made breakfast for her family, cleaned up, then proceeded to her forty-five minute commute to work. Toshiko took charge of the personnel records in the factory and was sitting at her desk and chatting with another employee when the room filled with a blinding light. Everything fell, and Toshiko lost consciousness. The ceiling dropped and the bookcases toppled onto Toshiko, horribly twisting and breaking her leg underneath her.

John Hersey noted, with irony: “there, in the tin factory, in the first moment of the atomic age, a human being was crushed by books.” It was August 7, 1945, and the Americans just detonated an atomic bomb over Hiroshima. Toshiko was 1,600 yards from the center of the detonation. Toshiko eventually recovered, though as a “hibakusha” and cripple, her fiancé left her. (The Japanese avoided the term “survivors” and instead used “hibakusha” which meant “explosion-affected persons.”) As a 21-year-old, Toshiko was depressed by this rejection, the loss of her parents, and by her long and difficult recovery from her debilitating leg injury. Father Kleinsorge, a German Jesuit living in Hiroshima and also a hibakusha, brought Toshiko comfort in his visits. According to Hersey, Father Kleinsorge wanted to convert Toshiko to Christianity, but Toshiko could simply not accept a God who had taken away her parents and put her through such horrible trials. How could that God also be loving and merciful? However, Toshiko was warmed by Father Kleinsorge’s visits, as it was obvious that he, too, was weak and in pain, yet walked a great distance to visit with her. One morning, Toshiko stepped outside of her house, and saw the sun’s rays glistening on the leaves of the bamboo trees, and it took her breath away. At once she was filled with an astonishing burst of joy – the first since the bomb dropped. Toshiko found herself reciting the Lord’s prayer. She was baptized a month later.

Toshiko began working at an orphanage and as a nursery school teacher and felt compassion for the mothers and fathers of the abandoned children, particularly the mixed race children resulting from American GI fathers and Japanese mothers. She developed a more unconventional opinion for a hibakusha: that too much attention was focused on the power of the atomic bombs and not enough attention was paid to the evil of total war. Toshiko asserted that warfare made victims of the Japanese who suffered through the atomic and incendiary bombings, the Chinese civilians who were attacked by the Japanese, the young and reluctant drafted Japanese and American soldiers who died and even the Japanese prostitutes with their mixed race offspring. Toshiko believed more notice should have been given to the causes of war than to the instruments of war.

Later, Toshiko became a nun, Sister Dominique Saskaki, and worked at a retirement facility. She found one of her greatest gifts was the help the residents die in peace. She saw so much death in Hiroshima after the bombing and knew what strange things people did, cornered by fear and death, so nothing surprised her.

Toshiko’s response to the violence and massive scale of destruction she witnessed in Hiroshima is quite shocking and inspirational. She refused to dwell on the bombing, but committed the rest of her life to promote peace and show kindness to people through service and compassion.

To be very clear, I do not equate the use of the atomic bomb in Hiroshima or Nagasaki with the spread of the coronavirus COVID-19. But as I read Hersey’s account of six different survivors from Hiroshima, I couldn’t help but notice the diversity of responses to a disaster.

How do we choose to respond to cataclysmic events?