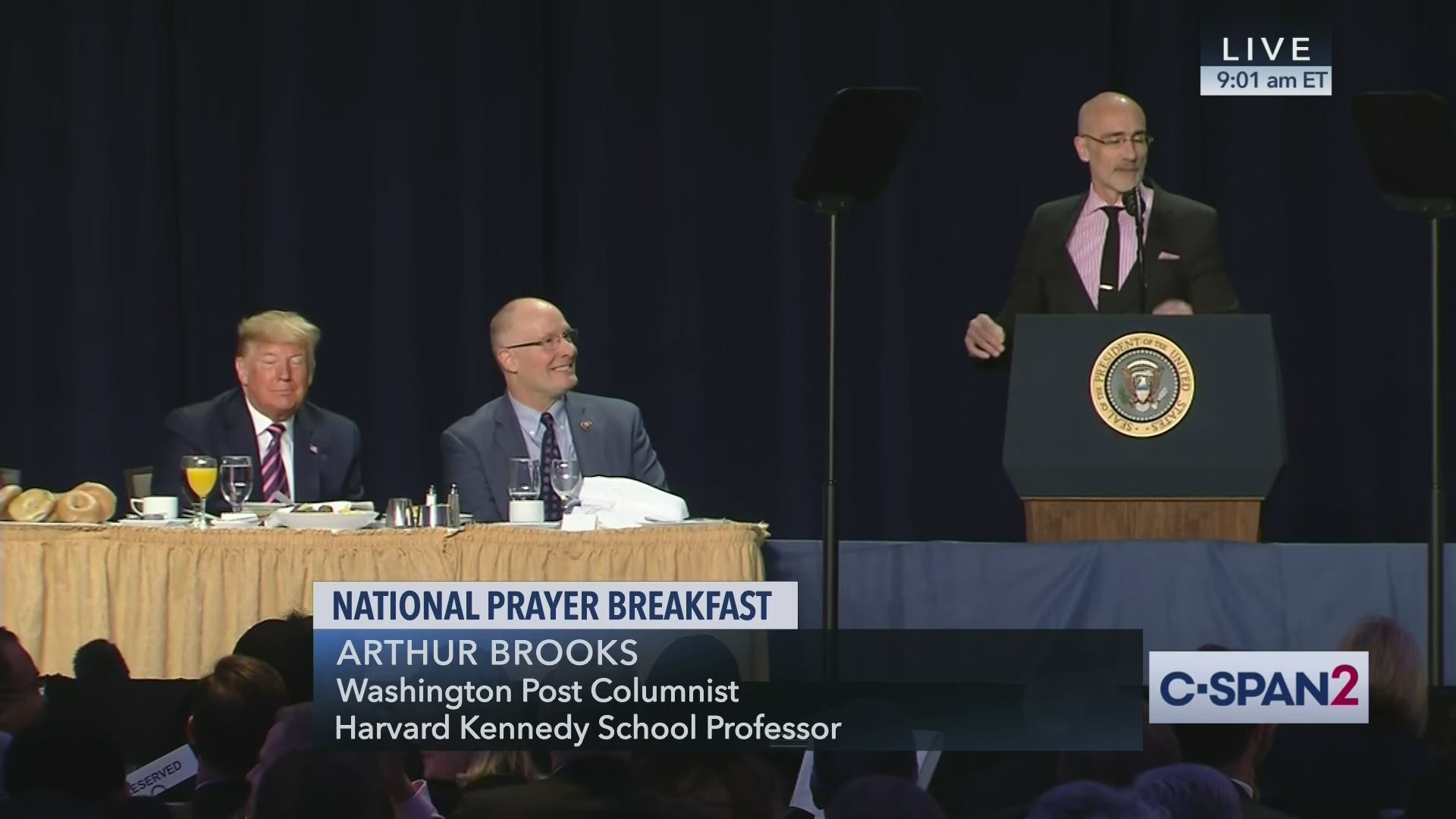 Arthur Brooks and I overlapped one year in the same high school back in the early 1980s when Arthur’s father was a visiting professor for a year at Calvin College.  I did not know him very well but saw him around (noting his rather long hair), and my friends in the Grand Rapids Christian High Band took note that Arthur was really good on the French horn.  (They weren’t kidding: among Arthur’s many distinguished accomplishments in coming years was his being the principal French hornist in the City Orchestra of Barcelona.)

A year ago Brooks was back in Grand Rapids to deliver a talk at Calvin’s January Series.  He focused on his new book and spoke on the theme of “Bringing America Together.”  Chiefly he singled out the vice of contempt as being particularly corrosive on our common life together and a near-fatal disease infecting the body politic.  Brooks contended that social media and other forces in the current culture are constantly foisting contempt on us.   The way news and information are presented to us is designed to make us feel contempt within our hearts even as we are then encouraged to respond with contempt toward any and all with whom we disagree.

Instead Brooks pointed to a better way, to a gospel way, to a Jesus way to try to cut the nerve of this vicious cycle.   It was a really good and lively presentation.  But as some colleagues and I discussed it later, we all agreed it had one blind spot: Brooks never engaged the elephant in the room: our nation currently has a President who traffics in contempt on a daily basis and inspires others to do the same.  Leaders set the tone.  Others see what leaders do, how they act, what they say and then take permission to go and do likewise.  Brooks was in no position per se to take on this fact but his talk would have been strengthened had he suggested strategies to help all of us pursue a contempt-free discourse despite this rather large obstacle in the national path.

Fast forward thirteen months to last week’s National Prayer Breakfast where Arthur Brooks was a featured speaker.  He spoke largely from the Sermon on the Mount and once again wove in his fine thoughts on the corrosive effects of contempt with Christ’s gospel ethic of love for all, forgiveness for all, and prayers for all (including one’s enemies).  But this time the elephant in the room he avoided in his January Series talk actually was in the room. And what happened next perhaps tells the tale of why Brooks avoided this the first time.  Because President Trump stood up to take overt issue with Brooks, with Jesus, with the Sermon on the Mount (eliciting laughter, of all things, from some of the religious leaders in attendance).  Trump then put on a mini-seminar on the fostering of and the expressing of a deep-seated contempt for many people, including people sitting only a few feet from him.

Arthur Brooks does not, I am sure, remember me and so would never have asked me, upon being invited to that breakfast, whether or not he should attend.  Had he done so, I suspect I would have counseled him not to go.   The way religion gets mixed in with our politics is bad enough just generally in this nation in our civil religion and such.  But the miring together of evangelicalism and Donald Trump in particular has had some extremely deleterious effects on the witness of the church.  Why get oneself mixed in with such a messy situation?

Probably I would have been wrong in such counsel.  I give my former classmate credit for bearing witness.  He pointed to the right things. And we all need to hear it.  No, the President wasn’t listening except to find points with which to disagree.   But maybe Speaker Pelosi was listening and maybe she needs to.  Her tearing up the President’s State of the Union speech was itself an act of contempt that she absolutely should not have done.  It only demonstrated what Brooks talked about last year at Calvin: contempt spreads like a contagion as deadly as coronavirus.  And when acts of contempt emanate from the top down, it makes it ever so much more difficult for the rest of us to resist contempt’s siren call.

But we have to.  We Christians absolutely have to.  So Arthur Brooks bore witness.  It landed like a thud with the person who most needs to help lead us all a different way but we don’t calibrate the bearing of witness to its likely success.  We bear witness because the Spirit of the living God is within us and, as Jesus said in John’s Gospel, that Spirit will continue to lead us into all truth.  Our job is daily to follow that lead as best we can.