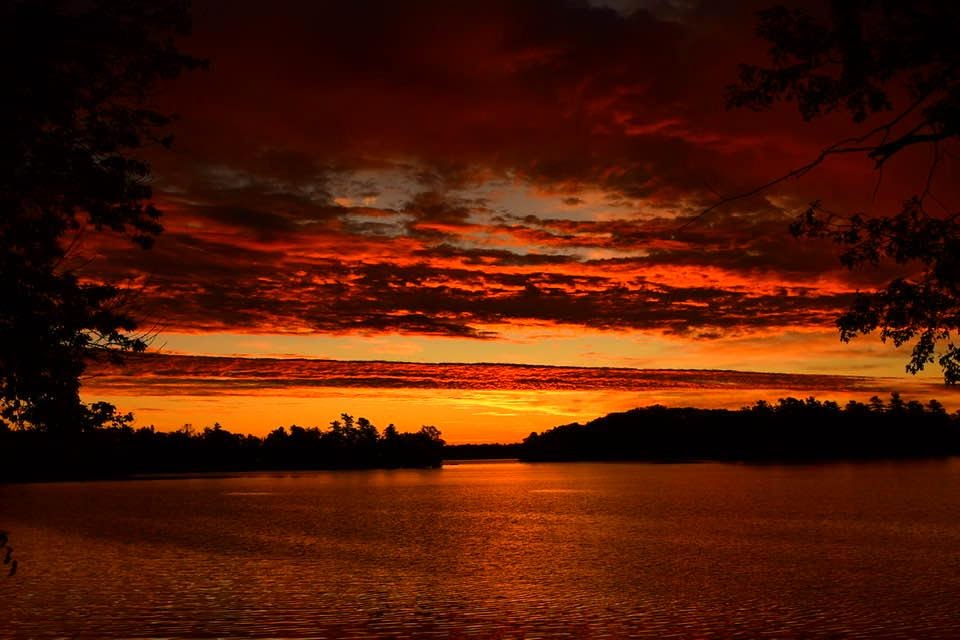 I Perceive I Am a Prophet!

For my sermon for the First Sunday of Advent I used an image that I got from my summer mornings at the lake.

I wake up before dawn, make my coffee, and go down to my little prayer-deck at the water’s edge, and there I say my Morning Office.

My daily prayer includes the Benedictus, the Song of Zechariah, which ends with, “the dawn from on high shall break upon us, to shine on those who dwell in darkness and the shadow of death …”

I repeat that every day, and it’s often apropos as I watch the dawn breaking during my prayers. And often, before the sun rises, and before the sunlight touches the treetops across the bay, I can see the sunlight reflected on the gull overhead as it makes its first patrol above the shoreline.

That’s the image that I used on that First Sunday of Advent, the light on the gull overhead. My point was that although this world is still in darkness, we can already see the light of Our Lord’s coming on various reflections in our world.

That Sunday afternoon I got an email from a parishioner, thanking me for my sermon. He added that my image of the seagulls reminded him of the image of the wings of the pigeons at the end of the poem, Sunday Morning, by Wallace Stevens, and he quoted the last three lines from it.

And, in the isolation of the sky,
At evening, casual flocks of pigeons make
Ambiguous undulations as they sink,
Downward to darkness, on extended wings.

Well, ignorant bonehead that I am, I had never known about this poem, one of the great ones of the last century, as I discovered. So I looked it up. And I was moved, and smitten, and even came to doubt my sermon, though I’m sure that was not my parishioner’s intent.

I was struck by the wistful, pained, self-critical, and generous paganism of the poem. (Wallace Stevens grew up in a pious Christian home, but he repudiated his belief, though he obviously kept his feeling for “Paradise.”) And it led to me to feel, for the first time ever, my unbelief.

I don’t mean to consider unbelief. I have always entertained that possibility. And I do think that the Christian faith, for all its coherence and beauty and power, is in some large sense preposterous, though true. I never think less of people for not believing it.

I mean to feel my unbelief — that I might be content to not believe. Not necessarily happier, nor triumphant in agnosticism, but content, resigned, relaxed, surrendering to the sad reality of the sun and the water and the green wings in Steven’s poem.

I think the trigger was the fact that this was Advent, and I was preaching about the Second Coming of Christ, the Return of Christ, “that he shall come again, with glory, to judge the living and the dead, and his kingdom will have no end,” as we repeat in the Creed. I realized that though I proclaimed it in my sermon, and tried to demonstrate how important it was to the New Testament, and how rightly to understand it (not as the “end of the world” but the “beginning of the world”), I found it hard to believe. It’s the doctrine I find the hardest to believe, that “he shall come again.” The world of Wallace Stevens seems just as likely worth yielding to.

I have no problem with the doctrine of Creation. (The “scientific” myth of the spontaneous generation of life out of the chemicals in the primordial soup is even more preposterous than belief in creation, just from the standpoint of mathematics; see Al-Khalili and McFadden, Life on the Edge: The Coming Age of Quantum Biology, 2014, pp. 277-80.) I love the doctrines of the Virgin Birth, of the bodily Resurrection of Our Lord, and of the Outpouring of the Holy Spirit.

My feeling of unbelief is not like Gretta Vosper’s atheism or even like John Suk’s general doubt. It’s more like Psalm 27:13 (BCP), “What if I had not believed that I should see the goodness of the Lord in the land of the living?” The psalmist says it for me.

And yet, at the Eucharist, I sang the Mystery of the Faith with my people, “Christ will come again!”

With these thoughts I was taken for a few days. I was not troubled by them, as if I were a faker or a hypocrite. But “taken” to self-examination, trying to measure in myself the attraction of

Wallace Steven’s mystical paganism, and what I would gain by it and lose by it, when compared to my belief.

Then it hit me, and with relief, and it was maybe because I was reading through the prophet Amos in my Daily Office. “Oh, so this is what it means to be a prophet!”

What I mean is that my message is not mine, it does not belong to me. It’s not for me to judge or even to accept it, but what’s for me is to deliver it. Like Amos, like Balaam, like Jeremiah, like John the Baptist, and maybe even like Our Lord (look at John 5:30-32). I am not suggesting that Our Lord did not believe his message. I believe he did, but I can say for myself that my message does not depend on my belief.

True enough, if I don’t believe the message I am giving, then I’m going to be a lousy pastor (see Peter De Vries’ comic novel The Mackerel Plaza). I have the same responsibility to my message that the soprano has to her rôle in Tosca, to learn it and know it and give my all and my best to it so that I can fully embody it. But in the same way as Tosca, my message is larger than myself, and in a real sense I just embody it. It does not belong to me. This conviction left me with a sudden awareness that although I am less certain in my belief, I am also more secure in it. And I think this is what it means to be a prophet.

I know that the typical understanding of a prophet is someone who speaks truth to power. Fair enough, but that’s not me. With the Reformers, prophecy was understood as the exposition of scripture with relevance to present situations. Calvinist pastors used to meet together regularly for meetings they called “prophesyings,” which must have been a very good thing. The closest to which I ever got was lectionary studies with other pastors.

I am relatively well-known in our community. Not infrequently I’ll be having a discussion on some topic with someone on the sidewalk, and that person will say to me, “Why don’t you preach about that?” And then I stand there with my mouth full of teeth. What should I say? “I have to wait till some scripture lesson about it might come up.” Or, “When God gives me the words for it I will.”

Do the people think I have some competence to make speeches from the pulpit on the moral issues of the day? I just say, “Yes, I should. Let me work on that.” How does anybody preach a topical sermon? How can that be prophecy, no matter how daring the message may be? A topical sermon means the message is your own! Of course there are lots of exegetical sermons too in which the message is the preacher’s own.

My best friend and I have a deep disagreement. No wonder, he’s a Wesleyan and I’m a Calvinist. He believes that God speaks to us directly in our minds. He believes that we have certain thoughts from which we can say, “God told me that.” I don’t believe it. I believe that God speaks to us only through scripture (though that can be in many and various ways). I don’t worry or argue about definitions of the Bible’s infallibility or authority, because it’s finally a matter of practice and discipline. So I’m always in the Bible.

The Bible is my addiction. I admit that I am looking forward to retirement, when I can read the Bible just like everybody else, without the burden of its message on my mind. Don’t get me wrong, I love it, and it’s the best job in the world, but even Elijah sometimes wanted out of it.

That’s what it means for me to be a prophet, that the message is not my own, nor even depends on my current certainty.

And that’s my comfort, that my message belongs to my faithful savior Jesus Christ, that he has fully paid for his message’s veracity, and set me free from the tyranny of having to prove it, even to myself, and he also supports me in such a way that not a word can fall from my lips without the backing of my Father in heaven. Because my message belongs to him, Christ, by the Holy Spirit, assures me of my integrity and makes me wholeheartedly willing and ready to prophesy for him.