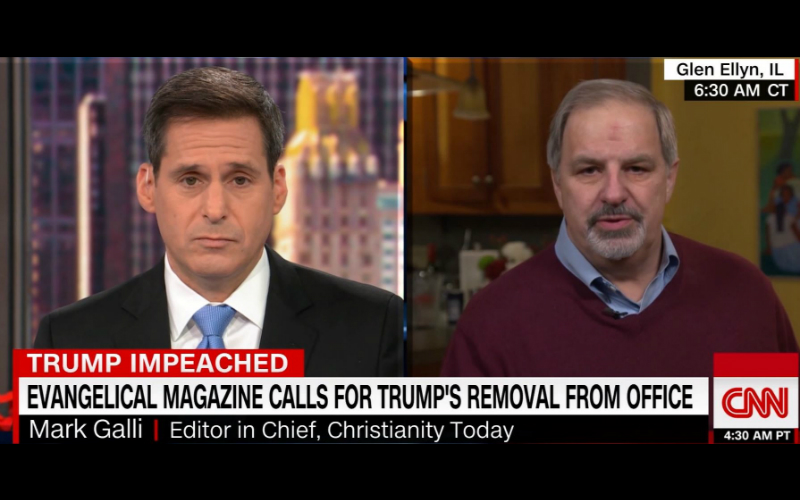 Near as I can tell, there has not been a lot of engagement here on The Twelve with one of the biggest religious news stories in a while: the publication of—and then the reaction to—Mark Galli’s editorial in Christianity Today calling for President Donald Trump to be removed from office.  In addition to taking that stand politically and morally, the editorial was hardly subtle in calling out evangelicals for their nearly uncritical and unwavering support of Trump no matter what he tweets, does, says, or insinuates.

“To the many evangelicals who continue to support Mr. Trump in spite of his blackened moral record, we might say this: Remember who you are and whom you serve. Consider how your justification of Mr. Trump influences your witness to your Lord and Savior. Consider what an unbelieving world will say if you continue to brush off Mr. Trump’s immoral words and behavior in the cause of political expediency. If we don’t reverse course now, will anyone take anything we say about justice and righteousness with any seriousness for decades to come?”

The original editorial was just over 1,000 words long.  Reaction to it has unleashed a torrent of many tens of (if not hundreds of) thousands of words more.  Mr. Galli appeared on major cable networks, was a lead story on news websites, was interviewed by the New York Times, and was called out by no less than the President on Twitter (turns out CT is a far left publication.  Who knew?).

Unsurprisingly the reaction divided almost neatly into two halves: on the one side there was deep anger by many evangelicals, including prominent leaders like Franklin Graham who was offended that Mr. Galli marshalled Billy Graham to his side.  On the other side there was what could almost be described as a palpable sigh of relief from many Christians broadly aligned with evangelicalism.  Finally (many as much as said) someone from within evangelicalism articulated what they had been feeling for the last four years.  Indeed, many people noted that they had never before seen a single article/editorial that had been shared so much on Facebook—it took a couple minutes for me to scroll through all the re-posts and shares that showed up on my news feed. Small wonder the CT computer server crashed from overuse!

A week or so later, lest Galli look like a rogue anomaly at Christianity Today, the president of CT, Timothy Dalrymple, doubled down in support of Galli and even inflamed things further for evangelical diehards who support Trump:

“Let me protect against two misunderstandings. The problem is not that we as evangelicals are associated with the Trump administration’s judicial appointments or its advocacy of life, family, and religious liberty. We are happy to celebrate the positive things the administration has accomplished. The problem is that we as evangelicals are also associated with President Trump’s rampant immorality, greed, and corruption; his divisiveness and race-baiting; his cruelty and hostility to immigrants and refugees; and more. In other words, the problem is the wholeheartedness of the embrace. It is one thing to praise his accomplishments; it is another to excuse and deny his obvious misuses of power.”

There have been other responses, too, including an open letter from a long list of black church leaders who appreciated Galli’s stance even as they noted all the ways black Christians have suffered under the rhetoric of this President and what looks over and over again to be his nascent—if not active—support of racist views among his supporters.  Other prominent leaders have weighed in, though near as I can tell never without getting pushback and critique from others.

Richard Mouw published a piece comparing Galli’s confrontation of Trump with Nathan’s prophetic denouncement of King David.  Of course, one commentator on Mouw’s Facebook posting of the article pointed out that Galli cannot claim the prophetic mantle of Nathan and so cannot claim to know the truth as directly revealed by God the way Nathan could.  True enough.  Then again, if any pastor or religious leader has to wait for a direct revelation from God before speaking out on injustice and the like . . . well, it wouldn’t happen much, and someone like Martin Luther King, Jr., would have ended up with very little to say.

Regular readers of The Twelve know that I am in the camp of those who breathed a sigh of relief that someone had the courage to say what many of us have agonized over in recent years.  But I am not posting this blog today to display my opinion per se.   Rather I have observed all this as yet another poignant sign of the era in which we are living.

In the past I have posted blogs here on The Twelve about the tight spot in which many pastors find themselves.   Their every word and phrasing in public prayers and sermons are passed through fine-mesh partisan filters to see if any axe-grinding to the left or to the right can be detected.  Whole swaths of the Bible seem unsafe to preach on seeing as they traffic in issues dealing with refugees and “the stranger within your gates” and other issues that look suspicious to many in the pews these days.   Preach on Proverbs and its incessant drumbeat on the pernicious effect of lying and false speech, and everyone assumes it’s the pastor’s personal attack on Trump (and not, curiously, as a possible biblical rebuke of someone like Trump).

But it’s not just pastors, it’s sisters and brothers in Christ who are at odds.  Sometimes this is within our congregations, other times it’s across denominations, and just generally it is so across the wider landscape of all Christian churches in America today.   Suddenly members of the one Body of Christ are dividing that Body into the “elites” at places like CT (or at colleges and seminaries) and ordinary Christian folk.  And if you are accused of being an “elite,” then it is as though you don’t even speak the same language of faith anymore and so can be dismissed accordingly.  (Such dismissals doubtless run in the opposite direction too among some.)

It’s hard to imagine the last time an editorial in any Christian periodical generated as much reaction—as much vehement reaction—as did Galli’s recent piece and the follow-up by Dalrymple.  In 1998 CT went on record to support Bill Clinton’s removal from office, but I don’t recall any reactions from the left or from the right in the church akin to what we see now.

Of course, that was also before Facebook and Twitter, before the balkanization of cable news outlets and the echo chambers of opinion in which all of us tend to sequester ourselves now whether we realize it or not.  In any event, it remains a time for prayer.  I don’t know what to think about the prospects for the healing of our larger body politic in the United States.  I am not, however, optimistic.  I just know that for the Body of Christ, there has got to be the hope that we can rally behind what is truly our common witness that “Jesus is Lord” and that not much else matters unless we get that right as a consistent piece of unifying proclamation to our hurting, needy world.