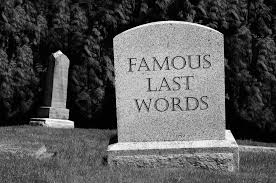 The stories of the wittiest are probably false. Oscar Wilde allegedly said, “Either this wallpaper goes or I do,” but those present reported nothing and it wasn’t until years later that the story of his wit in the face of death started circulating.

Likewise, the story goes that O. Henry was thought to be dead and someone said, “Feel his feet, no one dies with warm feet,” and the old short story writer lifted his head one last time, said, “Joan of Arc did,” and then went to his eternal reward.

Great story, but I don’t believe it happened.

I’m more inclined to believe the final words attributed to the Civil War General John Sedgwick must be true. Frustrated at what he perceived to be the cowardice of his troops, he exhorted his men to stop ducking and his last words were, “They couldn’t hit an elephant at this range.” Whoops!

Entertaining, but the reality is most deaths don’t yield pithy remarks. The dying person is usually too far gone. Dying is different than death; dying can be long and painful while death often comes as a relief. I’ve been thinking about all of this since my brother sent me the DVD he made from a recently discovered VHS tape of our grandfather’s funeral in 1991. I was the officiant—almost 30 years younger and certainly 30 pounds lighter. My hair was retreating at that point; now it’s finally surrendered. As odd as it is to watch myself, I was more interested in who else was there.

In the words of the new Star Wars movie, “The dead speak!” The DVD captured a lot of people who are dead now, including my mother, grandmother, and uncle. Others have grown up—my adult children and their cousins were all toddlers then. Only my wife is unchanged, showing no signs of the aging that’s hit the rest of us (he wrote in an effort to be able to return home tonight.)

My grandfather was a great man. I’d grown up knowing that he was Commissioner of Internal Revenue for the State of Michigan. He was a confidant of several governors, served on the local hospital board, was an elder in his church, and friend of legendary Michigan State sports figures Biggie Munn and Duffy Daugherty.

Because he didn’t talk about it, it wasn’t until after he died that I learned he’d saved 10,000 pieces of property from government foreclosure during the Great Depression as Ingham County Treasurer. He knew it would be better for everyone to keep people in their homes and on their farms than to make them homeless because of unpaid taxes. Eventually, he was invited to work for the state because they decided they’d rather have him on their team than working against them after he’d successfully sued them so many times. And I learned he’d first gotten involved in local politics, back in the 1920s, because he was aware there were some people working to revive the Ku Klux Klan and he wanted to stop them.

I mentioned these things at his funeral, discoveries I’d made reading through scrapbooks my grandmother kept. But more than that, I remembered the great man as a caring grandparent. I mentioned hours on the swing he’d hung from an apple tree in the backyard next to his garden, and days spent collecting apples in that yard for 25 cents a bucket. I remembered how he’d slide his dentures out to make me giggle, or how inevitably at every Christmas or birthday celebration he’d wind up with a bow stuck atop his bald head. I remembered attending countless MSU games together, and how he and my grandmother made every play, concert, and significant event involving my brothers and me. What I didn’t say out loud was that after I graduated from college and was trying to figure out what was next, my grandfather sent me a check every month that covered my rent.

He was proud that former Michigan governor George Romney had publicly called him a “man of integrity,” most likely referring to the fact that my grandfather handled hundreds of millions of dollars without a whiff of scandal. But I think of a deeper integrity in his life. His private life lined up with his public life. He was who people thought he was.

The great man was ravaged by cancer at the end of his life. Like so many retirees, he’d followed the sun away from the Midwest, first to Arizona and later to California, after my mother moved there. As a result, he died thousands of miles away from where he’d made his life. Until I saw the DVD, I’d forgotten that I’d gone out to say goodbye a few weeks before he died, forgotten that he told me he was at peace with God and ready to die, and forgotten that he told me he loved me for the first and only time in my life (although his actions had said that repeatedly over the years).

Sometime after he died my mother told me his last words. He was in pain, restless, and unable to get warm, even though it was over 80 degrees inside the apartment. He’d more or less lost the ability to speak, at least to say anything rational. He fussed with his covers, opened his eyes, and the great man’s last words were, “Oh, Humpty Dumpty.”

While death doesn’t care, I have been thinking about what Jesus said about becoming like a little child in order to enter the kingdom of heaven. There are so many of us who revert and regress at the end that I sincerely wonder if there is something holy going on there. The irony of a great man being reduced to Humpty Dumpty leaves me hoping there is more than the “all is vanity” conclusion of Ecclesiastes. Is God somehow preparing us? Who can say?

What I am sure of is that it’s vanity to think our last words matter. Our lives matter. Our integrity matters. My grandfather’s favorite verse was Micah 6:8 and he said he spent every day of his life trying to live it out: to do justice, love kindness, and walk humbly with God. He wasn’t a theologian and I’m sure never thought much about the proper ordering of faith and works. He was more of a James 2 faith without works is dead sort of guy. The integrity of my grandfather’s life mattered, and I am among many who was blessed by that good and faithful life.