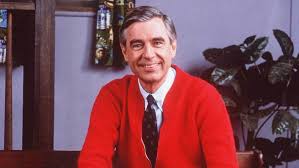 One day when my daughter was about three, I came home, sat on the couch, opened the afternoon newspaper, and buried myself inside its pages. My daughter toddled up with a book in her hand and said, “Daddy, please read me a story.” I sort of grunted and mumbled something about “in a little while” and she said, “Daddy, please read me a story” again and I grunted and mumbled again. Then a small hand pushed the newspaper aside and—no kidding—she said, “Hey, big fella, I’m talking to you. Read me a story!” Of course I picked her up, put her on the couch, and read her a story. You would have too.

I have come to recognize that reading the story was actually the second thing I did. The first thing I did was wake up. I attended to her. I paid attention. I looked at her. I considered her. I recognized her.

Which helps explain why Mister Rogers is having a revival.

We know we should attend to the people that are most important to us, especially children, but there have never been so many distractions in human history. We spend hours looking at screens, checking our news feed, Facebook, Instagram, Twitter, email, all the while implicitly making the claim that whatever is happening on the screen is more significant than whatever and whomever is directly in front of us. And if we aren’t on a screen, we’re plugged into earbuds, cutting ourselves off yet again from the lives of those around us.

Mister Rogers calls us back.

I saw A Beautiful Day in the Neighborhood during Thanksgiving break. It’s a great movie and I urge you to go see it. I’m not going to review it here; instead I am going to focus on why Mister Rogers is having a revival sixteen years after his death. Not only is there this movie, but the powerful documentary Won’t You Be My Neighbor was released in 2018. Why do we crave Mister Rogers?

The Presbyterian minister and Pittsburgh Theological Seminary graduate Fred Rogers has become a Protestant saint. But it wasn’t always that way. I remember when Mister Rogers was hopelessly square. I remember when Eddie Murphy made gleeful fun of him on Saturday Night Live. Bill Murray did him for the National Lampoon, hilariously unable to pronounce “Egg McMuffin.” Johnny Carson did him on the Tonight show. Today we have Mister Rogers on the screen again, and now it’s Tom Hanks, our most beloved actor, playing him straight-faced (and ever-so-slightly falling into his Forrest Gump character in the process). There’s no satire or parody involved. We don’t make fun of Mister Rogers anymore.

Because Mister Rogers is the antithesis of our distracting and distracted, fractured, hate-filled, polarized culture.

His revival is among adults, not children. We are so hungry for love we simply cannot get enough of it when we see it. We are starved for grace, to know we’re accepted just as we are, and sit transfixed when we hear Mister Rogers tell us he wants us to be his neighbor. And as strongly as we crave love and grace, we crave a public figure that diffuses anxiety instead of creating it. We crave someone whose voice and touch align, someone who authentically lives out her or his values, someone who shows that slowing down is important, and that silence is important, and that our feelings are important.

Mister Rogers, in all his slowness and simplicity, is telling us to wake up. “Hey big person,” he’s saying, “I’m talking to you. Don’t forget what matters most. Don’t forget who matters most.” And here I need to be very careful, lest I stray into some sort of Christian triumphalism . . . but I think the reason Mister Rogers resonates so deeply is his message is the Jesus message, the good news of love and grace and forgiveness, and we are born with an innate hunger for that message. A Beautiful Day in the Neighborhood is a Christian movie, focused on the Christian message of forgiveness.

I have shared here before some thoughts I first heard Tom Boogaart articulate about how being human means your heart has been broken and that all we have to give each other are pieces of our broken hearts. As a result our attempts at love are never enough. We never love each other enough. We are never loved enough. Once we sit with that reality for a while, we realize forgiveness is our only hope.

Can we forgive our parents for all the moments when instead of attending to us, they buried themselves in the newspaper or their work or their busyness or their anger or something else? Can we forgive them for not loving us enough? Can we let them off the hook for being human? Can we accept that even though sometimes they messed up they were doing the best they could? Mister Rogers wants us to. Not only that, he wants us to regularly take silent reflection time not just forgiving but remembering and appreciating all those people that have loved us into being.

It’s time to wake up.

Wake up and consider the lilies.

Wake up and consider the least of these.

Wake up and love your neighbor as yourself.

Wake up and forgive others and yourself.