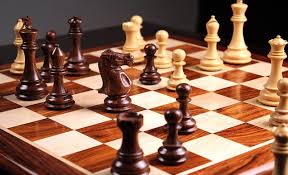 Advent II: Out of Book

The number of moves in the game of chess is practically limitless.

While almost nothing looks more orderly than chess pieces before a match starts, the first move begins a spiral into chaos. After both players move, 400 possible board setups exist. After the second pair of turns, there are 197,742 possible games, and after three moves, there are 121 million.

Don’t ask. These are not my numbers, but according to Frederic Friedell, a chess expert, there are more combinations of moves in the game of chess than there are atoms in the universe.

Friedell was a guest on the NPR program Radiolab. He described a library in the Moscow Central Chess Club whose shelves are filled with boxes containing little index cards; each card documents a particular game’s moves and countermoves. These recorded games go back to the 16th century. It is a treasure trove of brilliantly played chess.

Very few people have had access to this library until in the 1980s, when Friedell convinced the Russian Chess Federation to allow him to put all these recorded games online. Now everyone has access to them. Not only are more games added to the database, but players use it to study and memorize thousands of moves and even whole games of past masters.

There are those who accuse Friedell of ruining the game. He disagrees and argues that, instead, the game has been brought to a whole new level. Due to the availability of his database, named “Fritzy”, with 8 million games, players know just how many times a particular board setup has appeared in the entire recorded history of chess. On rare occasions, the game they are watching moves ‘out of book.’ It becomes a novelty.

Friedell observes that this happens in other games as well. He mentions hockey and describes Wayne Gretzky whacking a flying puck in midair to score a goal, and he refers to basketball and an impossible basket in the last second of a game by Larry Johnson. Out of book.

His host then asks Friedell whether he has an all-time favorite ‘out of book’ chess game. He says he does. It occurred in New York, on October 17, 1956. It was the game between Bobby Fischer and Donald Byrne. Bobby was a 13 year old kid. He came to this elite gathering wearing a T-shirt. Donald Byrne, an International Master, was urbane, played holding his cigarette between 2 fingers; he was put-off having to play ‘the kid’.

A few moves into the game Bobby moves his knight to the rim of the board. It’s not a smart move. He’s obviously a beginner, a kid who doesn’t belong here. But then, on Bobby’s seventeenth move, he takes the game ‘out of book.’ He exposes his queen. You don’t win by losing your queen this early in the game.

A crowd gathers to watch the kid being taught a lesson. Byrne takes the queen. But then four moves later, when everyone is sure Byrne would have the kid in a stranglehold, it is the kid chasing Byrne’s king all over the board–Check! Check! Check! People are astonished, baffled, wondering what elaborate game plan is at play here. Twenty moves after sacrificing his queen, Bobby tells Byrne, “Checkmate!”

Today, when people analyze the game, they realize that when Bobby Fischer gave up his queen, the game was pretty much over. Even if Byrne had not taken the queen, he was doomed to lose. There was an essential checkmate twenty moves before the end. It was unstoppable. The game is referred to as the game of the century. It was ‘out of book,’ a novelty.

To make sense of Advent and to draw glory and exaltation from all the High Holy Days of the Christian year, it is necessary to see that when God gave his Son, he made a move that was ‘out of book’, and clinched the game. In that move Evil, Death and the Devil were essentially put in checkmate.

An angel analyzing the move declared to all the world: “Do not be afraid, I am bringing you good news. Born to you is a Savior!”

No matter how long the game continues, the coming of God’s Son was the decisive turning point in the game of the ages. Of course, there were and are those looking on who scoff and say it is an absolutely foolish move, and there were and are others who see it as a sign of fundamental weakness. But we celebrate the move as a marvelous sign of wisdom and power.

God’s move was ‘out of book’…Checkmate!