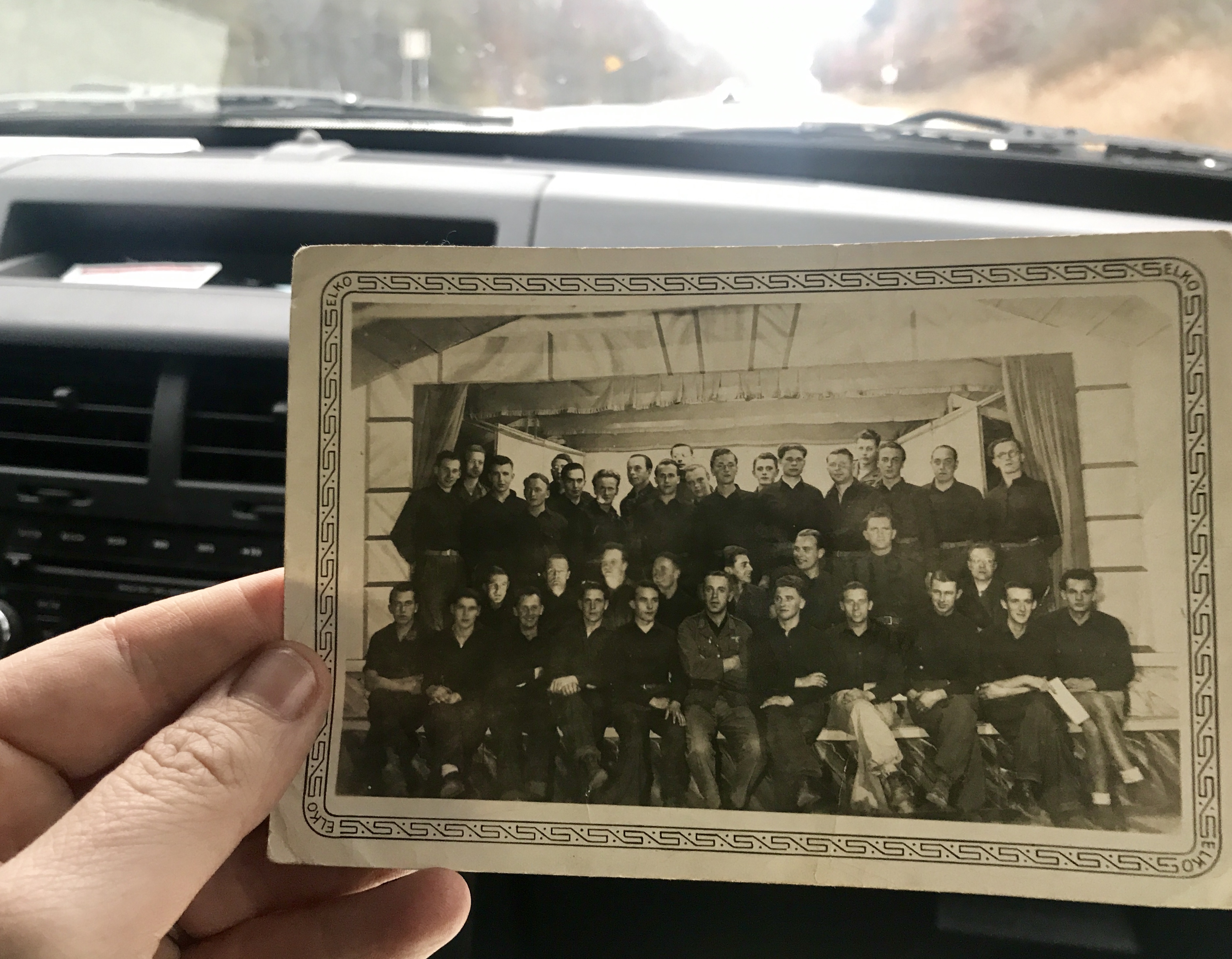 What is Left Behind

For most of his life, my grandfather managed an apple orchard.

We called it Grandpa’s Orchard, though technically the 200 acres of apples (plus 50-some acres of peaches, cherries, and plums) never really belonged to us, never belonged to Grandpa. My dad and his siblings were raised on that farm, and in many ways, I was, too. It’s hard to separate our family history from the trees that are now gone, from the acres of rolling land where we picked apples, took tractor rides perched on Grandpa’s lap, and built forts and played with our cousins.

Several years ago, while working on a writing project about the orchard, my dad told me a story that had been passed on to him by the orchard’s owners: during World War II, a decade before Grandpa and his young family came to live on the farm, German POWs had been hired to pick apples.

Fascinated by this tidbit of information, I’ve begun to do extensive research on the German POWs who were herded onto once-empty Victory ships returning from delivering supplies to Europe, a solution to the country’s labor shortage. From 1943 to 1946, 425,000 POWs — mostly Germans, but some Italians — came to labor camps across the United States.

In Michigan, where our family’s orchard is located, thirty-two base camps housed prisoners plucked out of war and in many ways, saved by being captured. Most were grateful to give up their guns and sent to camps where they were well-fed and outsourced to farms where they might be given the task of picking celery, apples or sugar beets.

Though farmers and their families were warned not to fraternize with the enemies that arrived on their land, those instructions were not heeded carefully. Enemy lines quickly began to blur when people talked and worked side-by-side. The prison guards who accompanied the POWs to farms, often GIs classified as unfit for combat, were by and large, a laid-back crew and quick to turn their heads if the POWs were invited to the farmhouse for dinner, especially if they were invited to partake, too.

Though a few ardent Nazis pushed their weight around in the camps, most POWs, especially at the end of the war, were young, disillusioned soldiers, more aware with each passing day on American soil that much of what they’d be fed were lies. For some, this began the day they sailed into an American harbor and they discovered that New York had not, as they had been told, been bombed to ruins.

The details of the POWs on my Grandpa’s orchard are fuzzy and few, but the story, as it was passed on to my dad goes like this: as the fall sun crept down toward the horizon at the end of their final day during their last shift, the prisoners cried as they were told it was time to leave.

While they crouched under branches, climbed ladders to the tops of trees, twisted and pulled apples from their branches, emptied full picking sacks of apples into bushel crates, they were able to busy their hands and their minds. They were given a reprieve, a place to take cover, to breathe in and out, to look up at a blue sky and pretend that, like them, their families were well fed, and like these farms, their homes were not in shambles. Their prison job had become a sanctuary, a shelter, a hiding place.

I’m writing extensively about the prisoners now — attempting a Young Adult, novel-in-verse that tells the story of Claire, a 15-year-old girl growing up on a Michigan apple orchard, and Karl, a 17-year-old German POW who comes to that orchard, homesick and sorting through the lies he was fed in the Hitler Youth.

As part of my research, I’ve had the pleasure of meeting Greg Sumner, a professor at the University of Detroit Mercy, and author of the book, Michigan POW Camps in World War II. Greg recently gave an enthusiastic and well-attended talk at the Grand Rapids Public Library, and I sat in the front row, voraciously scribbling down notes and making a list of all the scenes I’m next to write.

When talking with Greg after his presentation, he told me about a Volkstrauertag — the German National Day of Mourning — a ceremony that takes place each year at Fort Custer National Cemetery in Battle Creek, Michigan on the third Sunday in November. Fort Custer is the resting place of 26 German POWs who died during their internment in Michigan, 16 of whom were killed in a tragic train-truck collision as they were being transported back to their camp. More than just a Veteran’s Day, Volkstrauertag remembers not only soldiers killed in wars, but anyone who died due to oppression because of race, religion, disability, or conviction.

And so, last Sunday I recruited my dad to join me on my research mission to Fort Custer to attend the Volkstrauertag Ceremony. I did not know what to expect, and was amazed when we pulled up to the cemetery to see a crowd of people gathered around the 26 white tombstones of POWs. The program, that included music from a Detroit-based German choir and the firing of shots from an honor guard, included a memorial address from Wolfgang Moessinger, the Consulate General of Chicago. After hearing both the National Anthems of the U.S. and Germany, Moessinger challenged the crowd not to forget “the people who had been abused by a criminal government at the time.” He also expressed thankfulness for the American people willing to “look after these victims.”

I felt conflicted standing in the cemetery. For a day of mourning, there was a fair amount of excitement in the air. Can those two emotions mingle in harmony? The visit led me to as many questions as answers: how do we honor lives while recognizing the horrors of war? In what ways were these German POWs victims and in what ways were they players—even if ignorant ones—in an evil attempt at ethnic cleansing? Would these soldiers have been equally celebrated or welcomed if they hadn’t looked so much like the sons that Michigan families had sent to fight overseas? Would we be standing there, commemorating and remembering, if their skin had been a different color?

After the ceremony, we were invited to a reception at a local VFW Hall, where the choir sang a few more songs and German cakes were shared. There, sitting across the table from me, I met a 90-year-old woman, Hedwig, who was hard of hearing, but had a kind daughter who helped facilitate our conversation.

Hedwig leaned in close to tell me that she had lived in Munich as a young girl during the war, and later, after finding a job working for the U.S. government, met a young American and a few years later found herself a United States immigrant. She carried with her a photo from 1943 of a group of POWs, given to her by a neighbor, who was one of the men in the photo. She pushed the photo across the table to me and insisted I take it. “I’ve held this long enough,” she said. “It’s your turn.”

She said, “So many memories of my childhood, some good, many bad. People have told me I should write about it.” She shook her head. “Some things you want to leave behind.”

As we got into the car and my dad began the drive north to home, we processed the day. I held tight to the picture of the young POWs, staring at their faces, wondering about their stories — and feeling the weight and grace of stories. Of history.