This summer we’ve been preaching on food, meals, and banquets in the Bible. What comes to your mind? What stories and passages would you include? 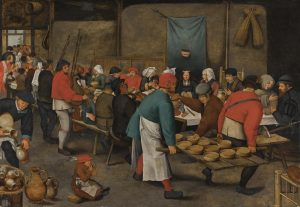 I was given Luke 14:7-11. Here Jesus gives some advice: how-to-behave at dinner parties. Don’t take the best seats and then be bumped down in humiliating fashion. Instead, seek an inconspicuous, lower-tier seat and be honored when the host says to you “‘Friend, move up higher.”

I was a bit unimpressed. Uninspired. There is nothing wrong with Jesus’ wisdom here. It just feels prosaic. It seems like nothing more than etiquette. As I age, I’ve come to appreciate, or at least accept, etiquette as more than bougy power dictums. It can make the world a gentler place.

Still, I want more from Jesus. I expect more from my Lord than I expect from Emily Post or Miss Manners.

After tossing and turning, mulling and churning, and being dissatisfied with how I was hearing the passage, finally, just hours before Sunday morning, the Holy Spirit broke through.

“Go and sit at the lowest place.”

Jesus is giving us more than advice for a dinner party.

I’ve come to realize that I must–intentionally, deliberately, frequently–be among people who are unlike me. I find myself blessed when I am sitting in the so-called lowest places. 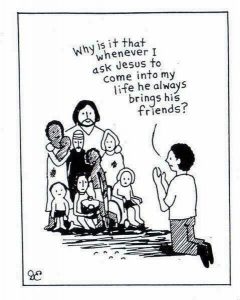 This is the humility Jesus is encouraging. Something much deeper than where to sit at a dinner. Where to hang out, who to befriend, who to side with–with the friends of Jesus.

A couple years ago Sophie flew out of Minneapolis to see her parents. On longer trips, sometimes the leg out of a small airport, like Des Moines, is the most unreliable part of the journey. So she drove to Minneapolis and I agreed I would meet her there on the way back. She’d be jet-lagged and I’d drive her home.

But how to get to Minneapolis when one of our cars was already waiting at the airport? Bus! I looked at their website. It looked modern and convenient. Free wifi. Good schedule. 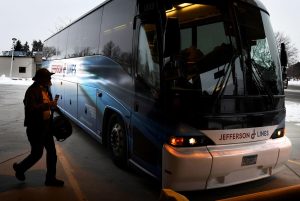 At 5am I waited at the Des Moines bus station. So far, so good. My bus was coming from Kansas City and farther south before that–Oklahoma and Texas.

It was still dark when it rolled in. The door opened but no lights came on. Apparently they were malfunctioning. I stumbled up the steps, down the aisle, and plopped into the first empty seat I found. I had to wedge myself in because the seat in front of me was bent or broken in a reclining position.

Frustrated, contorted, in the dark, I took out my phone to get on the free wifi. There was nothing. When I inquired I got a lethargic nod, or maybe it more pitying. I gathered it hadn’t work worked for months. Now I was beyond frustrated. I was seething. From Des Moines to Ames, I fed my anger. I was furious. What a nightmare this trip was going to be.

By the grace of God, somewhere north of Ames I fell asleep and didn’t wake up until Mason City. The sun had risen and somehow my own darkness had also lifted. Yet again, the Spirit works in me without me.

I looked around the bus and realized I was one of the few white people. Now that it was daylight, people began to talk more. I heard muffled conversations in Spanish. Some people looked to be what I would guess as recent or first-generation African immigrants. And the whites there were, didn’t look like they attended the same dinner parties I do.

At the different stops, as groups of people trundled down the aisle, I realized how many had been on the bus before I boarded, how many people had been riding much longer than my five hour journey.

I don’t want to be naive and romantic, as if that bus was a rolling Shangri-La. I didn’t interact much. I mainly observed. Watched people chat and laugh and help one another. I saw them open their satchels and share food. I felt glad, even honored, to catch a little glimpse of this world.

Almost to Minneapolis, I think it was the St. Paul stop, a young mother, schlepping some sizeable luggage, and her three or four year old daughter made their way to the door. I was certain I had not seen them board the bus, so they had come much farther than I.

At the bottom of the stairs, the little girl spotted an older man, presumably her grandfather, waiting for her. He was a Latino man, wearing a cowboy hat and boots, as well as nice, pressed jeans. He was probably about my age but looked like he had worked harder in his life than I can even imagine.

The little girl squealed with delight, and ran to her grandfather who scooped her up into a big hug.

Being a freshly minted grandpa myself, the scene brought tears of joy to my eyes. These people who seem so different from me were in some ways so similar. I watched grandpa and the little girl hug and squeeze and rock back and forth. I felt so fortunate, so blessed to see this.

And it was as if I could hear Jesus saying to me, “Friend, move up higher. Be honored in the presence of all who sit at the table with you.”