Sitting at my seminary desk and reviewing the material for an upcoming lecture, I heard my cell phone buzzing and put it to my ear:

“Tom, you are not going to believe what I just found.”
It was my brother Phil. He had been sorting through all the documents and papers that my parents had left behind after their deaths within weeks of each other in the late winter of 2017.

“I found the original deed to our house.” 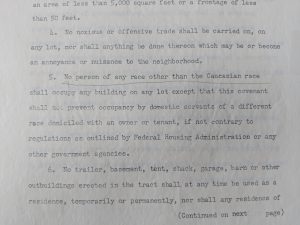 The actual deed to my parents’ house

In 1949 my parents become pregnant with me, their third child in a short span of three years. My father had come home from the war, married, and started college. Housing was in short supply, and they lived in a tiny upstairs apartment in the Dutch quarter of Grand Rapids, Michigan, known as the Brick Yard, a place where poor immigrants of a previous generation had lived and worked making bricks and tile. The apartment was too small to accommodate a third child.

In the post-war years, the leaders of Grand Rapids had been plotting new neighborhoods to provide housing for the returning soldiers and their growing families. One such neighborhood was a swampy patch of land north of Fulton Street and east of Plymouth Street that had been drained and dried. My parents bought the plot that was to become 1828 Mayfair Drive and, with the help of friends from Third Reformed Church, build a Levitt house. Designed by Abraham and William Levitt to accommodate the needs of returning soldiers, a Levitt house was small but affordable, and most importantly it had as many as four matchbox bedrooms.

“It restricts occupancy to Caucasians only,” Phil said.

“No person of any race other than the Caucasian race shall occupy any building on any lot except that this covenant shall not prevent occupancy by domestic servants of a different race domiciled with an owner or tenant….”

The leaders of the Grand Rapids community were no different from those in any other community. They shared a vision of the good life. Such a vision expressed itself in laws, and these laws created a world. The leaders of Grand Rapids instantiated their vision of the good life with laws that would divide the city on the basis of race. I was both born into the world that they had created and borne up by its values largely unaware.

When I was a sophomore at Grand Rapids Christian High School, I participated in many different sports but chose to wrestle in the winter rather than play basketball because I liked the singularity and clarity of wrestling—just you alone on the mat competing with the other.

One week, we were preparing for a match against South High. I did not think much about it, until a day before the match when I suddenly realized that there was a good chance that I would be wrestling an African American, South High being in the African American quarter of racially divided Grand Rapids. After that I could think of nothing else.

Up to that point in my life, I had had no contact with African Americans, physical or otherwise. Now I faced the reality that I might have to grapple with one for six minutes. I got a knot in my stomach from a tangled mess of feelings I could not sort out.

At the weigh-in my fears were confirmed. My opponent was indeed to be an African American. When the time came for our match, I walked onto the mat in a daze, thinking about everything but the match itself. My opponent dove for a single-leg take-down, and I instinctively defended myself and threw a whizzer. As soon as we touched, my fears vanished. It was a match just like any other match, and he was a young man just like any other young man.

There are so many things I could say about this part of my story of growing up in Grand Rapids, but I will limit myself to two.

First. My father came back from the war and took advantage of all the benefits offered under the GI bill including a low interest loan for his Levitt house and a scholarship to complete his college education. He was borne up by these privileges and I of course was borne up with him—white privilege. The father of my opponent that day on the mat could not take advantage of these benefits because discriminatory laws prevented him from buying land in certain neighborhoods, getting loans, and being accepted at most colleges and universities. I had come to understand the injustice of all this in a general way but it became overwhelming specific when my brother Phil called to tell me that the neighborhood where we grew up was zoned Caucasian Only.

Second. I learned something that day on the mat when I was fifteen years old, something that contained a hint of a way for me to approach the complicated and seemingly intractable pain caused by systemic racism. I learned ironically that the touch that I so feared, the touch that the leaders of Grand Rapids so feared and were trying to prevent, was the very thing that took my fear away.