American Evangelicals Around the World

The Chairmen of the Word, and World: Lausanne Conference on World Evangelization, 1974

Please pardon my submitting a book review for today’s post. I happen to be abroad (oh the pain of retirement!) and so had to file this in advance. It first appeared September 20 at Dordt College’s in all things.

Melani McAlister’s The Kingdom of God Has No Borders: A Global History of American Evangelicalism (Oxford University Press) appeared this year to a lot of attention. Consider the extraordinary hype of one of the blurbs on the dust jacket: This “is an enthralling work of stunning originality and ingenuity. By resituating the history of modern American evangelicalism internationally, Melani McAlister is not just complicating conventional wisdom, she’s smashing it completely. In its place, she offers a startling new interpretation,” namely, that “American evangelicals have been fundamentally shaped by the wider world.” 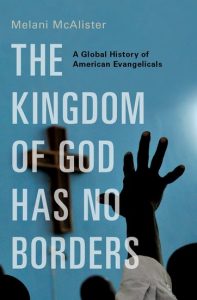 Compared to that, I put down this book with a “meh.” No Borders does provide us with a wide-ranging, closely researched account of just how American evangelicals have been involved overseas—and to a lesser extent, of how that involvement played out back home. And that’s an important enough aspect of the American evangelical story. But had it been a genuine paradigm-changer, a central question would not have been left dangling: have these not-so-innocents gone abroad in the mode of traveler or tourist? That is, have they gained genuinely new insights overseas or simply flirted with exotic locations and people while cramming everything they encountered into pre-set categories?

From the evidence McAlister presents, the overall answer to these questions is “yes,” and it is to her credit that she leaves the ambiguity in place. Sometimes American evangelicals have been substantively changed by their experience; sometimes they have simply garnered a broader range of examples to decorate their preexisting notions. Sometimes, the consequences of their encounters have proven benign, sometimes malign, and sometimes genuinely life- and mind-altering.

Professor McAlister, who teaches American Studies and International Affairs at George Washington University, arranges her book on a chronological plan divided into three sections. In Part I, stretching from the 1950s to the Lausanne Conference on World Evangelization in 1974, she investigates evangelicals’ postwar world-missions boom against the backdrop of the civil-rights movement back home and Cold War maneuverings abroad. Plenty of heroism to play up here: the “Auca martyrs” in Ecuador, the death—or flight—of missionaries in the Congo, the triumph of doughty little Israel in the Six-Day War of 1967. 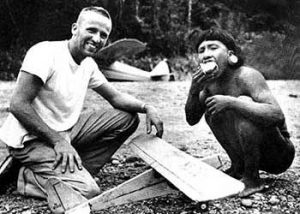 But there’s plenty of soul-searching too—for instance, when new converts from Africa are barred from white colleges and churches in the oh-so-evangelical South, or when Congolese Christians assert their spiritual as well as political independence against white condescension. McAlister traces how these dynamics unfolded across successive Intervarsity triennial conferences at Urbana in the 1960s to launch a distinct form of evangelical social activism. That initiative, in turn, came into contention with the evangelism-only push of the church-growth movement at the “Battle of Lausanne” in 1974.The outcome of that contest, McAlister concludes, was a big-tent compromise that offered room for both parties under a generic “evangelical” label.

The second section analyzes evangelical self-perception “as both persecuted victim and compassionate rescuer” [106] across the last third of the 20th century up to the achievement of South Sudan’s independence in 2005. The conservative wing played up Communist depredations, especially in Eastern Europe; the more progressive focused on the evils of South African apartheid. But the advantage in this Reagan-Bush era lay with the conservatives. They used it to pass the International Religious Freedom Act of 1998 and to popularize the image of a “10-40 Window” of non- or under-evangelized “people groups” living in those latitudes around the world. For that target the newly crafted tool of “spiritual warfare” was to be deployed, largely against Islam. All in all, American evangelicals come off in these chapters as genuinely concerned for suffering abroad but also seizing that suffering for their own purposes. That “we are persecuted too” was the lesson of the contemporary best-selling novels of Frank Peretti and the politics of the Moral Majority.

In Part III McAlister treats 21st-century developments: from the spiritual tourism of the short-term missions fad through the Iraq War to the sorry aftermath of South Sudan’s independence. She devotes a whole chapter to American evangelicals’ role in the “sexual politics” of HIV/AIDS controversies in Africa. To me the low-light of this section comes in the conservatives’ anticipation that the American invasion of Iraq would open amazing proselytizing possibilities—and their abject silence when the infamous photographs from Abu Ghraib exposed a fondness for torture on the part of the liberators instead.

By contrast, the best parts of the whole book come next, recording McAlister’s two stints as a participant-observer. In the first she accompanies some members of a Wisconsin megachurch to live, and learn, in blighted villages in South Sudan. In the second, she works with an Intervarsity youth group in Cairo. These are short-term missions of a very different sort and leave poignant images of the better possibilities that evangelicalism has always offered: self-searching, compassion, the felt call for social justice, and genuine openness to the movement of the Spirit. McAlister’s writing, as well as her subjects, come alive here.

This book will have enduring value from the detail with which it bores in on issues like evangelicals’ notions of race, of proper American foreign policy, even of the essence of Christianity itself. But to return to the laudatory blurb: Have American evangelicals really been “fundamentally shaped by the wider world”? Or have they shaped it per their own imagination? Some of the former but more of the latter, I think. This tribe’s worst companions—militarism, American nationalism, clueless Zionism, and reflex neoliberal economics—infuse too much of this story to make it a genuinely new departure.

Much of the time, the international scene simply provides a wider stage upon which American evangelicals enacted, once more, the traits that have marked the movement from its birth with Whitefield and the Wesleys nearly 300 years ago: (1) Centering everything upon the individual heart, which makes fathoming social structures and intellectual complexity a hard pull. (2) Contempt for established authority building into a counter-cult of celebrity and sensationalism. (3) A perennial combination of mysticism and marketing, of tears and quantification. (4) Perfectionist zeal, inevitably frustrated, turning into apocalyptic fears. (4) Each generation reinventing the wheel of authentic spirituality to create a “real” and “relevant” church. Until the kids are bored. It all somehow “works” but runs in the same old loop of historical forgetfulness. The excited blurb thus fits all too appropriately: hyperbolic claims of something brand new! and best ever! for a solid product bearing a mixed message.

The final question arises in McAlister’s short, five-page Epilogue. Here she broaches the matter that must loom over the next generation of scholarship by and about evangelicals, the specter of Donald Trump. What does it mean that 81% of white American evangelicals voted for the most forthright pagan ever to occupy the White House? What does it mean, in the specific context of this book, that people who supposedly have dealt so much with and learned so much from the rest of the world support a leader defined first and last by xenophobia? What does it mean that people bearing the label of “good news” seem so responsive to a violent rhetoric of hatred and fear? It may mean that the truly revolutionary treatment of American evangelicals remains to be written. Maybe that book will tell the story of how the American brand was redeemed by, or resisted, the more genuine article that is alive around the world. It will be the story of white American evangelicals finally deciding whether they’re Christians or Christianists.

James Bratt is professor of history emeritus at Calvin College, specializing in American religious history and especially the connections between religion and politics. Starting in Fall 2016 he took a break from blogging on The Twelve to teach in China and on the Semester at Sea, which venues afforded him some welcome distance from the USA’s descent into its current mortal illness. But now he’s back in the States, looking for hope. The title of his most recent book, Abraham Kuyper: Modern Calvinist, Christian Democrat (Eerdmans, 2013), is eerily echoed in that of the volume he has edited and completed for the late John Woolverton, which will appear in 2019: “A Christian and a Democrat”: Religion in the Life and Leadership of Franklin Delano Roosevelt.