God Counts by Ones

We saw it a few years back.   There was a major refugee crisis.  We knew many thousands were fleeing violence and poverty and trying to come to Europe, often taking treacherous sea crossings in shabby “boats” to do so.   We knew about these people in the abstract.  And then one day a single photo of a drowned little Turkish boy named Aylan Kurdi went viral around the world.   Suddenly these otherwise anonymous refugees had a name, a face, an identity.   And suddenly people cared more fiercely than before.  The effect of this perhaps did not last.  Refugees may again be faceless and anonymous to most of us and, just so, we pray for them or contribute money for them a little less once again.

But sometimes it seems like the more concentrated a situation is, the more people care, the more we pray.  Think of the 12 boys on the Thai soccer team whose entrapment in that cave–and subsequent rescue–riveted the world.  Probably at any given moment on any given day children are in danger somewhere in the world.  Thousands of them perhaps.  Maybe millions.  Every day children in Syria hunker down while bombs rain from the sky and missiles roar overhead.  But we cannot see them, don’t know their names.   But get just a dozen boys together in one dangerous place and our prayers ascend even as did our “Hallelujahs” and our “Praise the Lord!” sentiments once they were successfully extracted from what could have become their watery grave.  I would not be surprised if those boys got prayed for in lots of churches.

At the same time we were fixated on the fate of those 12 boys, thousands of Mexican and Central American children in the U.S. were holed up in detention centers.   Their lives are not in danger (I hope) and so no dramatic rescue is in the offing for them in a scenario that would rivet our attention.  Their plight is not on the same plane as the formerly trapped Thai boys.

Still, they are (most of them) bewildered, frightened, and probably scared to death.   They have no idea where they are, no idea where mommy or daddy are, no idea if they will see mommy or daddy again.  The Trump Administration stripped them from their parents in a brutal, cruel attempt to discourage illegal immigration.  This was not some bland “enforcing the law” scenario as some have said.  Stripping children from their parents is not the law, which we know since President Trump was able to try to end the crisis with an Executive Order (and even the President cannot overturn a law that way).   This was no Romans 13 respecting the governing authorities as the Attorney General and then the Press Secretary Sanders tried to assert.   This was abject cruelty in service of an attempt to tell people “Don’t come to this country this way or else!”

I have also heard some analogies being made to explain this.   If John gets arrested in Grand Rapids, Michigan, on a DUI charge while his son and daughter are in the back seat, the kids don’t go to jail with dad.  True.   Except that neither in that case are the two kids trundled onto a bus or an airplane and sent to Tucson to stay in a detention center such that they don’t know where daddy is and daddy doesn’t know where they are.   And maybe after a couple weeks in Tucson (as has happened to many children) they get put on another bus or plane and taken to Minneapolis and to another strange environment.  In Grand Rapids dad might go to jail on the DUI but the kids will be sent home to mom, or given to grandparents or . . . or anything than themselves shipped bewilderingly across a foreign land to a strange, scary place.

But again, maybe it’s hard to pray for or care about the faceless thousands of children who have been swept up in all this (and who are only slowly and haltingly getting reunited with their parents).  So let’s get specific and think about just one.  Here he is: 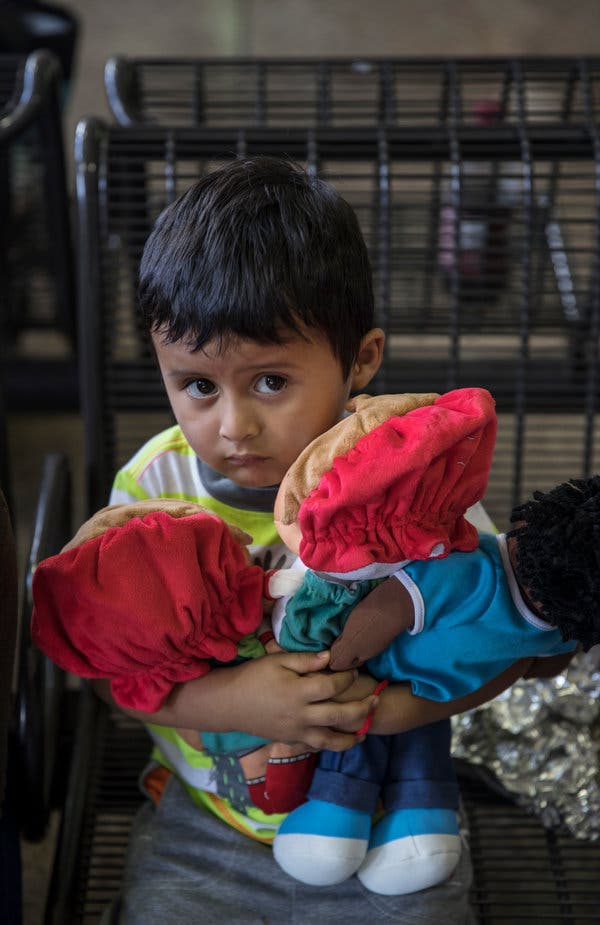 His name is Adan Galicia Lopez.  He is three years old.  And he was taken away from his mother and kept away from her for four months.   He was featured as part of a New York Times story on the plight of these children.

Look, we might all agree illegal immigration is indeed against the law.   We might all agree we need to reform our immigration policies.  We might all agree that every nation, including our own, has the right to border policies (please don’t post comments that say “So you just want open borders, huh?”   I don’t.).   But as Christians we should also all agree that the innocent children who get swept up in this–not to mention those who really do come here as refugees fleeing violence–deserve our love and help and yes, our prayers.   Perhaps our compassion and our prayers for these kids will increase–and our “Hallelujahs” at reunions will likewise increase–if we can put a name and a face to this crisis.  I suggest we start with little Adan.

Jesus once told a parable about a rich man and a poor man.  Except what is unique about this parable in Luke 16 is that it is the only parable in which a character has a name.  It is the poor man Lazarus.   Jesus/Luke did not want “the poor” to be some nameless, faceless class of people we talk about (and maybe dismiss) in the abstract.  “The poor” have names, histories, parents, siblings, stories.   Jesus did not want the poor man to be a cipher.  So he gave him a name: Lazarus.   That might help you care more about him.

Over the last few years I have graded a lot of sermons on the Parable of the Lost Sheep.   Many of my students use the same source materials and so many of them have quoted in their sermons a line a commentator once came up with to explain why the shepherd in the parable would abandon the 99 safe sheep to go after the 1 lost sheep (an otherwise foolish, reckless move for a shepherd).   And the reason is,  “God counts by ones.”