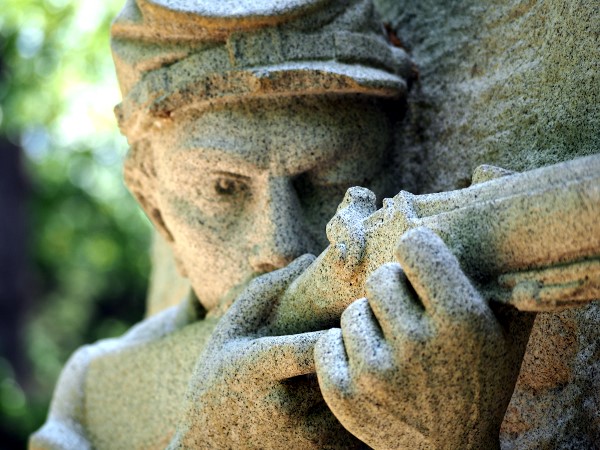 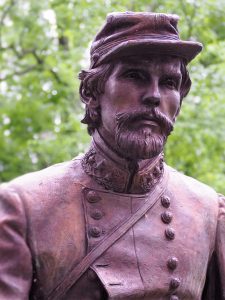 Chickamauga was a very costly Confederate victory. The total of 16,000 Union casualties was second only to the Battle of Gettysburg that summer, but the Confederate Army lost even more–18,000. No matter. After significant defeats at Gettysburg and Vicksburg, for a moment in time, the Rebel army could hold their heads high after Chickamauga, the huge battle (the Rebel line stretched out for 15 miles) just south of Chattanooga.

But then came Lookout Mountain, a huge, little win “above the clouds” for the Feds, and then Missionary Ridge, where an odd unplanned assault that probably shouldn’t have happened, miraculously evolved into the Union rout it became. Soon enough, Sherman would begin his fiery march through the heart of Dixie.

Regretfully, I’m sure, Confederate General Braxton Bragg assigned Major General Patrick Cleburne (an immigrant, by the way) to basically stall what he knew would be the imminent Federal advance that would follow the railroad through the Ringgold Gap, a narrow span of bottom land between White Oak Mountain and Taylor’s Ridge. Cleburne’s assignment was really nothing more: allow Bragg to get his legs beneath him after the stinging losses he and the Rebels had just suffered.

Patrick Cleburne was no fool. He scouted the area himself late at night, then deployed his 4000 troops as stealthily as he could, tucking them in around every nook and cranny to await the Union advance. Think of it this way: the line of Union forces is marching four abreast. It’s November, and it’s cold, and it’s sickeningly muddy. What’s more, everyone–Feds and Rebs–have been through hell in the last month already, losses have been awful, almost lethal. No one was expecting resistance. Sherman’s “March to the Sea” didn’t start with great ceremony, but already there at Ringgold Gap, the Union army ran into significant fireworks.

The numbers are telling. Cleburne’s four thousand bravely held off the Union’s fifteen. It was, for the moment, an unmistakable Rebel victory, even if the Union advance, not to mention the direction of the war, was only temporarily sidelined.

Today if you want to do some shopping in the town of Ringgold, Georgia, you head on down to Cleburne Mall because the Irish commander is a war hero. His statue graces a commemorative park along Hwy. 72, the very route the Union Army took when it ran into withering fire from Cleburne’s deftly placed troops and batteries. Hard as it is to believe Cleburne had been in this country for less than 20 years when he won a significant victory along the tracks here. But in Ringgold, as you can imagine, he’s a hero.

On April 27, 2011, a rare EF-4 tornado formed over Catoosa County, Georgia and stayed on the ground for fifty miles, ripping through the town of Ringgold, Georgia, where seven people died. It did immense damage and laid waste an old cemetery right there along Hwy. 72, where ancient stones tumbled and fences around grave sites got themselves hideously twisted.

Five years later, someone still mows the lawn in that cemetery. It’s not a weed patch, not totally unkempt. Still, the place could use some elbow grease and a little TLC. Stones are down and scattered, but there’s a memorial there that’s unmistakable from the road out front, and it’s intent is pure and sure and loyal. Look for yourself. 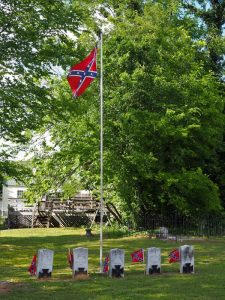 The flags are brand new, still crisp enough not to have torn or shredded in the wind. They’re here and they’re elsewhere on graves throughout.

I’m not interested in casting aspersions, but it’s clear that what matters to the residents of Ringgold and Ringgold Gap is the identification of these graves with the noble cause of the Confederacy, more at least than the concern some have for whose bones may be lying beneath the stones. I’ve walked though in dozens of cemeteries in this country, several in Europe, seen hundreds–maybe thousands–of American flags on grave sites, including the flag on my father’s. But I’d never seen the Rebel flag adorn a grave before, never seen a stone marked “CSA.” 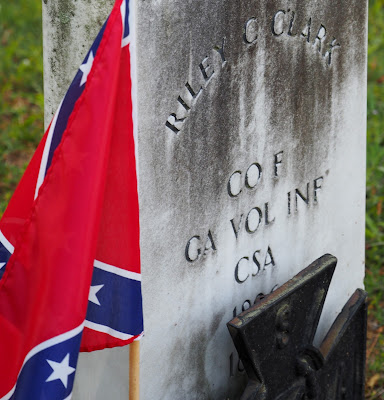 Okay, I admit it. It was a bit startling to this Yankee, given the outcry over the stars and bars in South Carolina and the fact that Gov. Nikki Haley signed a bill taking the Rebel flag down from the State House after the murders in church at Charleston. The fresh clean flags in that scattered Ringgold cemetery seemed an outright statement of rebellion 150 years after Appomattox.

But there’s still blood in the soil of the place where Gen. Patrick Cleburne’s brilliant maneuvering meant 4000 Rebels successfully stalled 15,000 Union troops so Gen. Braxton Bragg could reassemble his routed army and live to fight another day. Scars remain on the walls of the railway station that still stands sentry over the tracks that run to Atlanta. Some 900 casualties held up the line at Ringgold Gap. Let the people tell their story, I told myself. Let ’em remember because no matter whose side your ancestors were on, no one should forget.

It’s a forlorn place really, that little tornado-ravaged cemetery of ancient stones. But the flags are fresh and bright. Obviously, they mean something important to someone. Maybe more than they should.

After all, what Major General Claborne did, no matter how brilliant or heroic, is only stall the inevitable direction of a much bigger story.

I stood there on that old ground full of their dead, walked between the fallen stones of that old cemetery’s colorful Rebel flags, tried to imagine what it would have been like, right there, to take a rifle ball, to fight for everything your heart told you was right, to watch good men die.

At that little Ringgold cemetery, I didn’t become more of a rebel, maybe just a bit less of a Yankee.