This is my father’s world

This is my father’s world I’m told the male kestrel is grayish blue, even orange-looking, which means the determined hunter who entertained our whole family so royally during a wonderful Easter dinner last Sunday was a female, because, in case you’re wondering, the American kestrel is sexually dimorphic.

Before some of you run off to Wikipedia like I did, sexually dimorphic means only that males and females aren’t created equal. Well, they’re created equal, but obvious physical differences make them look different–think ringneck pheasants, who also occupy our backyard, or wood ducks or mallards. Donald Trump would say, “think human beings.” He’s not wrong. About most things he’s not to be trusted, but human beings are sexually dimorphic too, like kestrels, these fierce little fighters sometimes called sparrow hawks.

One of which, this one, a female, did some serious weekend hunting outside our back windows in the middle of an Easter ham I would be happy to admit was “to die for” if that phrase weren’t inappropriate anywhere near to Holy Week. BTW, our whole Easter dinner was terrific; the pretty human female I live with–we’re sexually dimorphic too–was on top of her game.But this particular kestrel, this little feathered hovercraft, had our grandkids fighting over the binoculars as she gathered her own Easter meal, probably a field mouse. She’s no bigger than a robin, but that distinctive beak gives away her origins: she’s a falcon, the tiniest member of the whole family. Try to imagine a cute falcon, and you’ve got a kestrel.

Be not deceived–she’s no Disney character. Kestrels know exactly what they’re doing.  They’re adept killers. When she grabs a field mouse out of the long grasses out back, she quite deftly snaps its spine, something of a merciful killer, but a killer nonetheless. Fortunately, yesterday, we missed her dirty work. She pulled something out of the grass, toted it to the cornfield out back, and lunched bloodily out of sight among the stubble.

But her hunt was a delight to watch. She’s regal and slim, weighing in at no more than four ounces. That significant wingspan and a tail like a windmill rudder–well, that’s stretching it–keeps her in place, watching closely. It seems she can tread air as long as she needs to, the talent that had us all oohing and aahing. We couldn’t have paid for better entertainment. 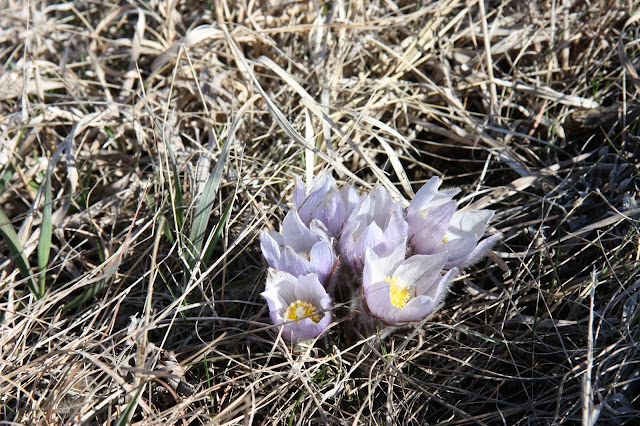 And then there were these guys up on the side of a hill along the Little Sioux River, same haunts as last spring. They’re prairie crocuses, sometimes called pasque-flowers, I guess, by those who prefer sounding French.

They’re a provincial favorite in Manitoba, but not to be eaten, according to Wikipedia, who claims they they slow the heart and therefore are quite toxic. Chew too many and you may be beset with “diarrhea, vomiting and convulsions, hypotension (LOW blood pressure) and coma.” Listen to this: “Blackfoot Indians used it to induce abortions and childbirth.” My grandson and I, who hiked up the hill to find them, didn’t indulge. But there they were–pure blessing as long as you didn’t eat them. 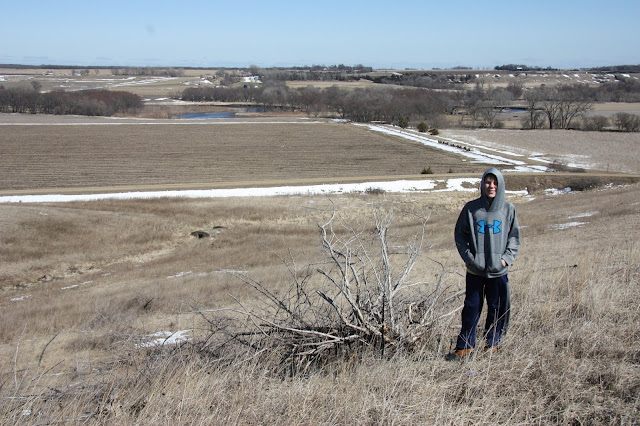 In case you’re wondering, the ditches are greening nicely right now, snow from a winter storm last week having melted politely into the ground. Winter’s toughest blows, we’d like to think, are behind us.

Ditch grass is nice, but the prairie crocus is the shining star of early spring. They fight their way through last year’s grasses to get a taste of the warm sun. They don’t rule the prairie like sun flowers, but once the seasonal curtain rises there they are, always first on stage. They start the show. Fragile as they seem, they punch through on a mission to remind us once again that new life already has its bags packed and is on its way.

Call me a dreamer, but I think the prairie crocus is created especially for Easter.

So I think we had a good one, a good Easter, in case you’re wondering. Worship in church, then at home, and then out in the rustling grass, where once again, robed in his own wonders, we heard him pass.

He speaks to us everywhere, doesn’t he? 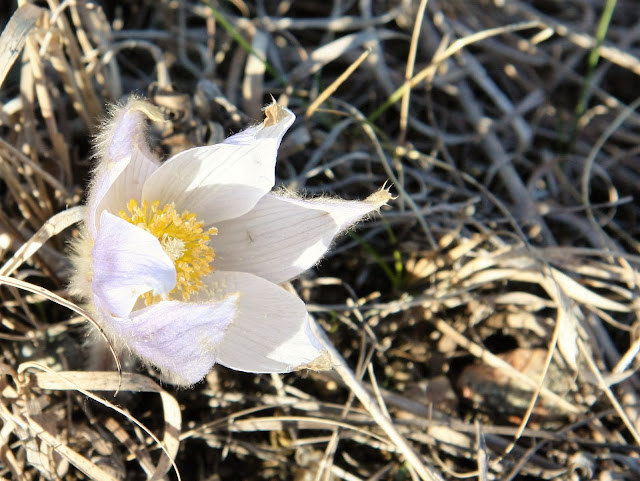