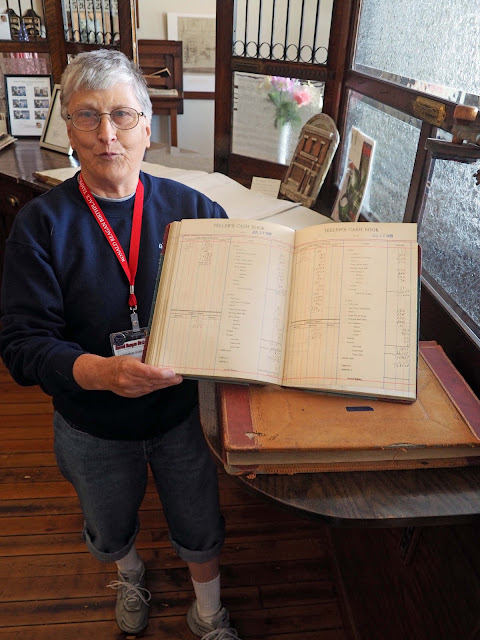 If you’re lucky, you’ll get her. She’ll tell you she was a tomboy when she grew up on the farm, probably mention it more than once as she takes you through, even if you don’t ask for a tour. But the truth is, it’s probably not much fun to sit around and not greet visitors, if you know what I mean, especially when you got a great story to tell like she does.

Just stay with her. She’ll make it fun.

By the way, this isn’t the bank she worked in herself before she retired. That one is across the street. This one went belly-up during the Depression; but the owners just tucked all the furnishings away in the basement, where they sat collecting dust for years until some bright light in town decided this was, after all, the birthplace of Ronny Reagan, movie star and President of these United States, and they dang well ought to do something about it because he was born right here in Tampico, right upstairs of the old bank in an apartment that’s much bigger than people imagine when they ascend all those steps, as they will, if you get her as a guide. She’ll scoot up those stairs as if they were nothing at all, but then she always was a tomboy.

And she’ll tell you too that she used to keep the bank’s books just like the one she’s holding here, except in that bank across the street, everything written in carefully by hand, pen and ink, books just exactly like this one, she says when you’re behind the bank counter reclaimed from the dust in the basement.

This one, original flooring too, everything just like it was, all of it hauled up once they started with the whole Reagan’s birthplace thing. 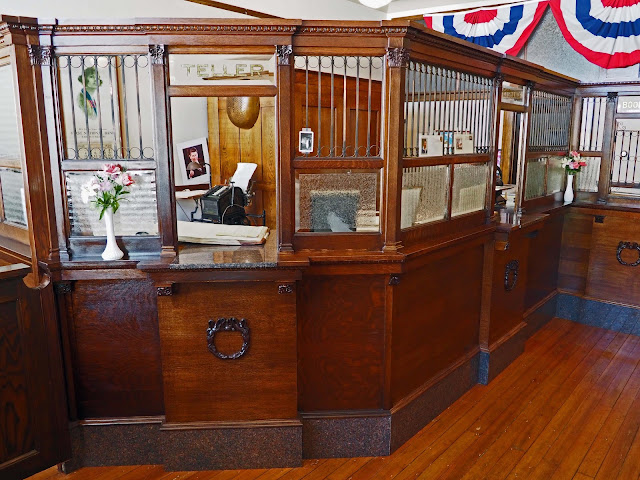 You know–all of this sat in the basement, would you believe it? 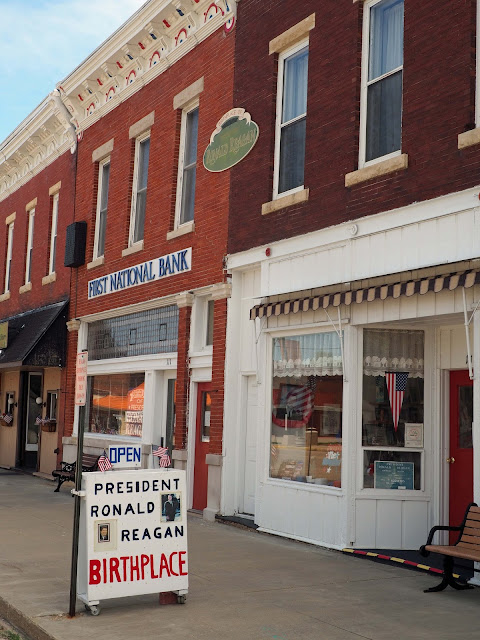 Truth be known, of course, there’s not much else going on downtown Tampico these days, so it’s a lucky thing that the Reagans were here when Nellie and Jack had the boys. Ronnie was born right here in this bed upstairs.  Right here, seriously–Ronald Reagan, 40th President of the United States. Right here. 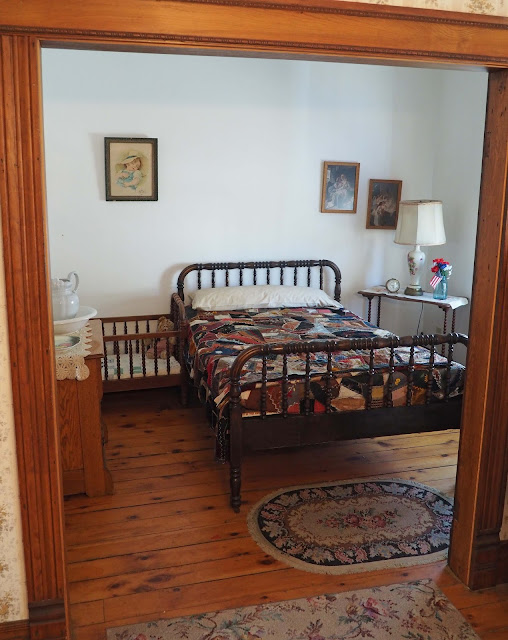 You don’t have to be a true-blue Republican either, she’ll tell you if you confess you’re not. She’s accepting. Why just last week people from Poland stopped in, from Japan, from all over the world. They can’t believe it either but it’s true–Ronny was born right here.

And when he was a baby, if Nellie had to run downstairs to pick up some groceries or do something down on Main Street, she could just knock on the window in the summer kitchen and the neighbor lady would come, the woman from the apartment next door, and Nellie would just hand little Ronnie off. Quick and easy babysitting. This window. Not kidding either. Right through the window. 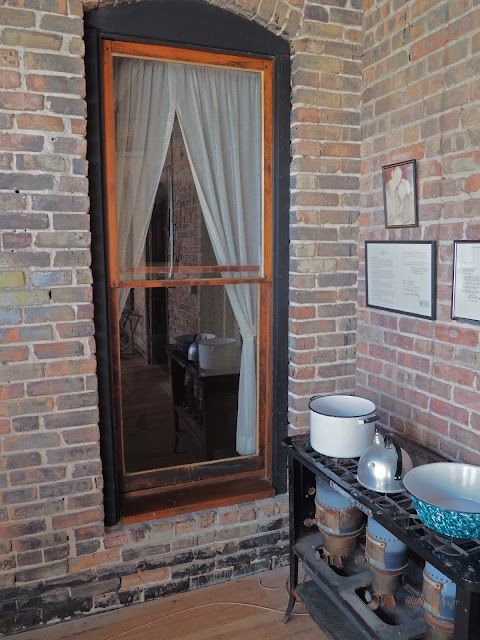 There’s a picture of Ronnie crawling through when he was here in ’76, you know, when he first took a run at the Presidency and lost the bid. He and Nancy visited then, and when she saw the pictures they have up in the front room–Jane Wyman, you know, his first wife–she told Ronnie–we all heard her–that it was time for them to get back on the plane. She didn’t like those pictures. She didn’t like ’em at all. 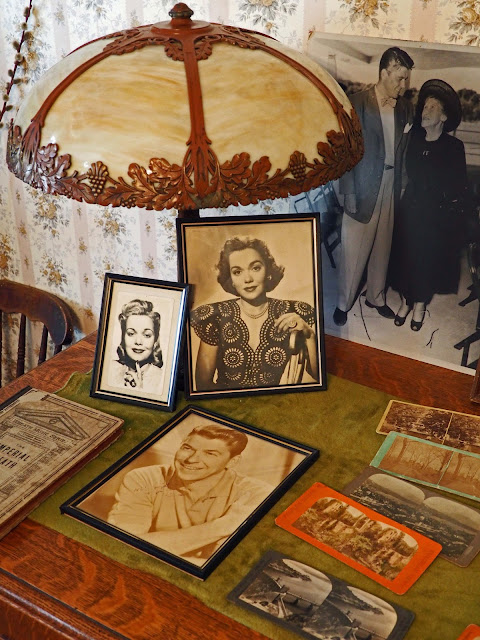 Of course, when they came back again in ’92, Ronnie really didn’t know much at all because he had alt’heimers by that time, and nobody in town really knew it beforehand because they hadn’t announced it–nobody’d said it ahead of time either, you know–so he sort of walked along behind Nancy. It was a real surprise, but it didn’t take long and everyone caught on because basically he just looked at Nancy all the time, worried about where she was the moment she might have stepped out of view. There he stood as if he were somewhere other than the place he was born. Nothing about Tampico looked like home at all to him because he had no memory. It was very sad. Everyone knew. You couldn’t miss it. We didn’t mention it, of course.

They didn’t announce it for two more years.  Here’s a copy of the letter he wrote, in fact, and it’s dated 1994. That’s two years later.  But we knew. We all knew. 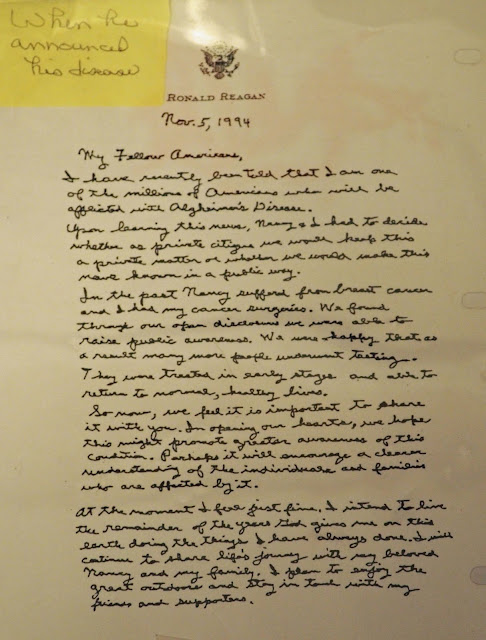 The tomboy guide will tell you it really doesn’t matter to her if you’re not a Republican. “I did wonder a bit,” she told me, when I told her I wasn’t among Reagan’s most loyal, but that’s okay because, you know, it takes all kinds.

I wish I could remember her name–I can’t. But if you stop in, downtown Tampico, ask for her, the woman who used to work across the street at the other bank. What’s-her-name again?

She does President Ronald Reagan up in fine small-town form, worships him in a way a small town should. After all, they know the man best. He was born here.

Reagan would have greatly enjoyed the tour himself had he been along yesterday. Say what you want about his politics–you love him or you don’t–but one of his rare blessings was that he could smile his way through just about anything. She’d of had him grinning the whole time. 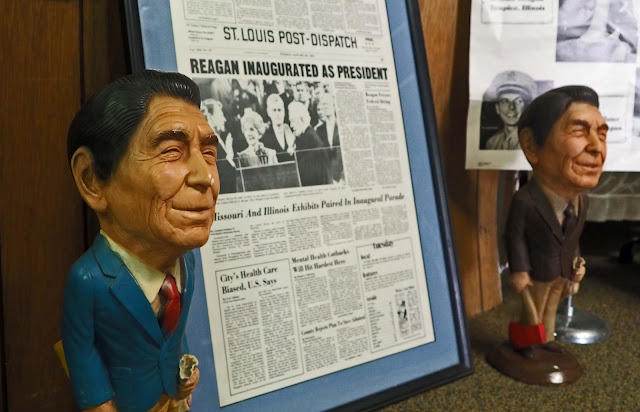 And did she tell you about the rainbow? He had this picture right on his desk in the Oval Office because the night before his election Tampico had a thunderstorm and wouldn’t you know it?–a double rainbow came down right here on the apartment where he lived. It happened, I swear. Here’s the picture. That’s something, huh? 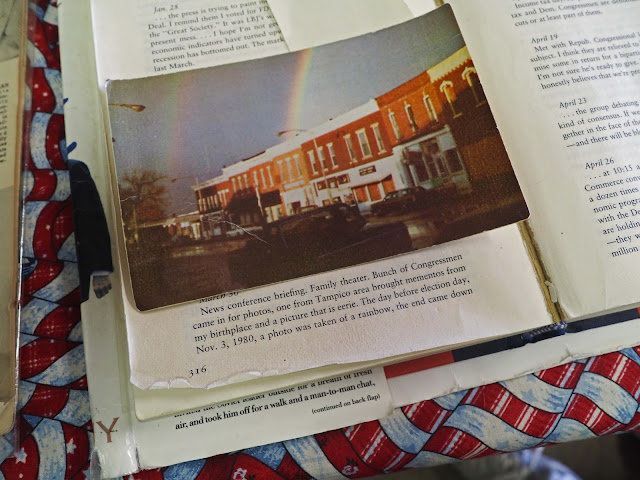 Well, it was nice visiting, she told me. Here, take one of these cards along with you since you got such a kick out of it. Go on. 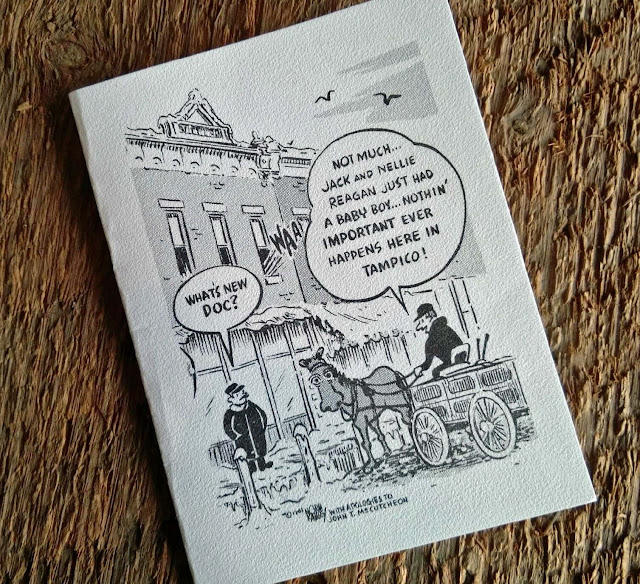 Thanks so much for stopping by.