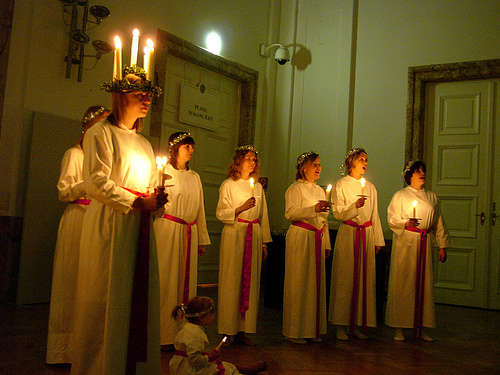 Today, in Sweden, a traditionally Lutheran country, most of the populace, I’m told, will go Christmas-crazy, having fallen in love a few centuries ago with Saint Lucy. It’s Saint Lucy’s Day in most of Scandanavia today, just as it is every December 13, a date roughly aimed at winter solstice, which is, of course, a date worth a good party if you’re parked that far north in the hemisphere this very dark time of year.

Even the name, Lucia, feels as if it is has something to do with light etymologically, and when the people dress whichever young lady reigns this year–as they will today in schools, churches, communities, and even families, the Swedes outfit a garlanded crown beset with candles. Well, fire marshalls carrying the weight they do today, more often than not, what’s aflame on all those blonde heads is created by batteries not open flames. But that violation of code is quite recent.

Martin Luther was no Calvinist in his rage against papist monstrosities, but that doesn’t mean he held much regard for the museum of Roman Catholic saints. So the Sicilian St. Lucy is something of an anomaly in Sweden and Norway and Denmark and Finland, the only saint so lavishly celebrated way up north. Makes no sense.

Even her origins are shrouded. One story traces her sainthood to the attention she showed to the Christians in the catacombs. Her ceaseless efforts prompted her to design headgear that could light the way, enabling her to use both hands to minister to martyrs. Viola!–St. Lucy, the saint of light.

Others maintain that she coverted to Christ and swore allegiance to the poor and to perfect sexual innocence, thereby incurring the wrath of her fiance, who reported her forbidden chastity to Roman authorities.

When told she had to leave, or so the story goes, 50 oxen and 100 men couldn’t move her. Seriously.

Frustrated Roman authorities simply hauled in tree limbs and burned her right there. Still, flames ‘a’lappin’, she wouldn’t stop praising the Lord. In fact, her unloving fiance took a sword to her throat to stanch the triumphant praise, and that didn’t stop her.  She wouldn’t stop until she was given last rites–or so the story goes.

Still, how on earth did young Italian Roman Catholic saint get past Luther?  And how did she get to Sweden in the first place, Sicily not being right next door?

There was, some say, a closet Catholic queen in Sweden; maybe she was the one who wouldn’t give Lucia up.

Yet another explanation involves those rugged sea-faring Vikings, who took her story back to Scandanavia.

And still another explanation is that Santa Lucia simply fit in with pre-existant pagan Yuletide rituals already being celebrated among the common folk. It may come as a shock to Fox News, but people were giving presents, eating and drinking too much, and celebrating holidays at the end of the year long before anyone thought to rejoice in the birth of the boy-child savior.

There is, after all, nothing particularly Christian about a  Christmas tree either. It could well be our trees and St. Lucy’s garland crown share an origin in pagan rites.

There’s more.  Long ago, good old country pagans in Sweden were scared to death of Lussi, a scary female being who punished naughty children on December 13. Because she did, people got together and partied ’till early morning to keep her away, while in the barn, the animals spoke–really! The Lussi story, a beloved tradition, morphed splendidly into St. Lucy’s Day because, given all the fun, even Luther himself couldn’t steal it away from all those darling Swedish kids. Hence, the holiday.

The Dutch have Sinter Klaas, of course, and his so very politically incorrect, sooty-faced minions. And we’ve got Santa Claus, who turns his own tricks come Christmas Eve, visiting every last home in the world by way of chimneys most houses these days don’t have.

Christians have Jesus, the baby, a God who somehow, some way, became a man–or rather a baby and was born, this king of heaven and earth, in a lean-to barn. You either belive or you don’t, and I do.

I believe in Jesus Christ, not Lussi or Swarte Piet, Sinter Klaas, or old St. Nick. But I sure love our tree and the bright green promise it offers so lavishly amid the dark of deep December.

In a world of mystery and mysteries, in so many ways I reach, as all of us do, for the Light of the World.