Where the river bends 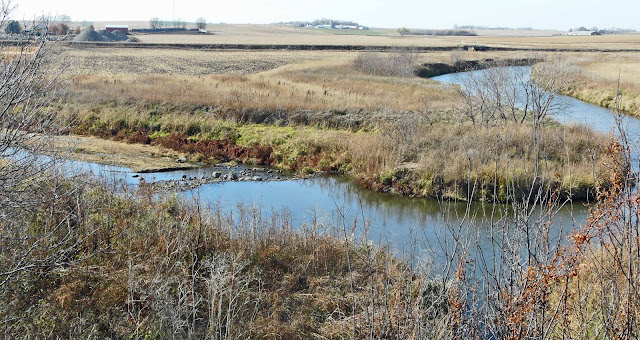 Mitt would count them in his column, I’m sure.  After all, they certainly aren’t part of the 47% of us who leech off the nanny state.  No, sireee.  Ain’t nobody in the bunch who doesn’t pull his own weight.  I’m talking about the beavers up stream from our place, a community of folks who’ve been doing what beavers have been doing for hundreds, maybe thousands of years, damning the river.  You can see it here just around the curve to the west, a bunch of stones they must have dragged into the flow, as well as a ton of brush.
Here it is up close. 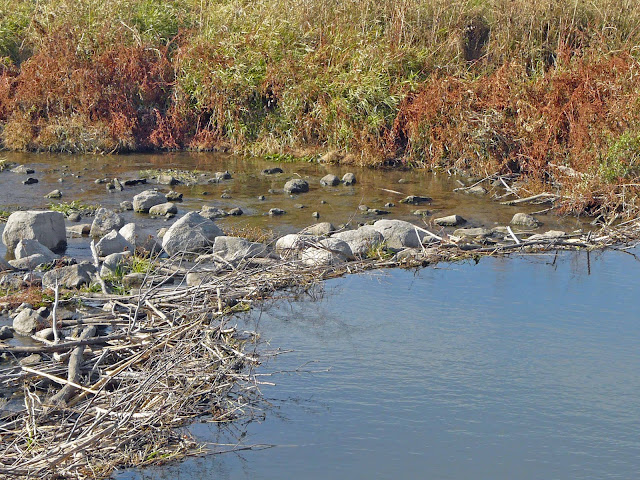 They’ve been busy, well, as beavers are, I suppose. Of course, building a dam is a matter of survival; they’re not just looking to make a lake for their jet skis.  The dam is the means by which they stay alive–they’ve got to get the river up high enough so that, under water, they can get into the food-storage dens they make in the banks and, likewise, keep out whatever unwelcome guests may saunter into the neighborhood. It’s hard work, but they do it, like decent hard-working Americans. Welfare’s a dirty word.

Here’s their Route 66. I’ve never spotted a one of them out here, but you can’t help but be impressed by their infrastructure.  This path is theirs, almost big enough to drive a truck through. 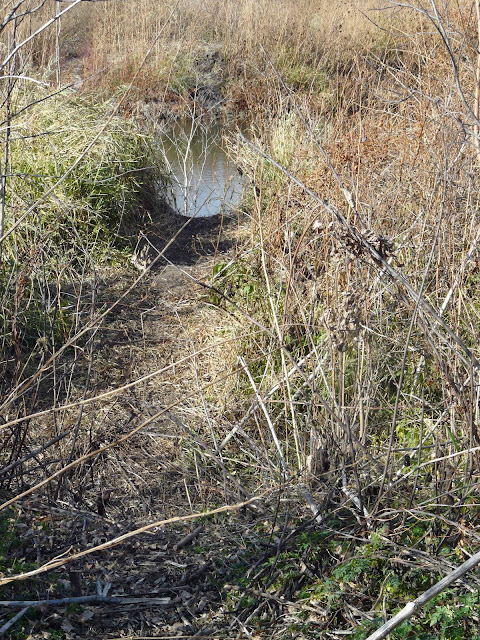 Well-kept streets and roads are required to get their raw materials dragged down to water, and, right there where the Floyd River takes an about face, there are but few trees, maybe a couple dozen saplings, most of them now chewed off and lugged down this path, then set in place in the dam. Look here at what’s left all those young trees, everyone of them gnawed down to spear points. 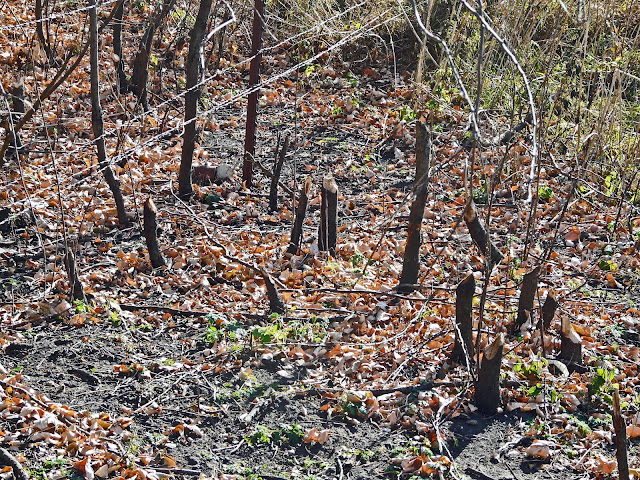 So much for the saplings. But it has to be done, and there’ll always be more.

You know, I’m not totally sure they’re so much in Mitt’s column as they are in Obama’s.  After all, there are no fat cats here, not a fancy Lexus in sight. Truth be known, they share the same holes, the same dens–how unAmerican is that?  They’re far more Hutterite, far more Lakota than Tea Party; and if any of them ever read Ayn Rynd, it’s clear that she made no disciples because the only way to stay alive for this bunch of nose-to-the-grinders is to work together, communitarian-like.  Shoot, why not use the C-word? These neighbors of ours, these beavers, are really communists, which means they’ve got to be for Obama.  You just don’t build something like this without working together, and I don’t think there’s an office out there for Bain Capital. I’m not sure, but they may even be union. Okay, that’s may be going too far. 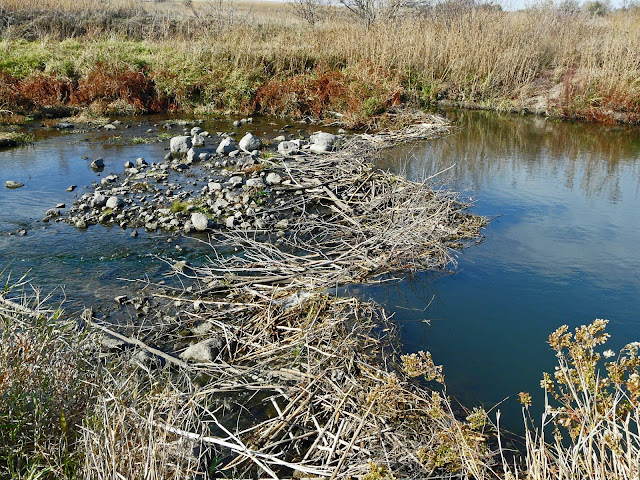 I can stand up here above all their hard work and look over miles and miles of rich Iowa farmland, an eco-system of tall-grass prairie now largely gone.  Once upon a time it covered an expanse of grassland a couple of states-wide, like nothing Lewis and Clark had ever seen before came up the Missouri. Today, that entire eco-system is 99% vanished.  Today it’s all Big Macs and ethanol and agri-business.

But the beaver are still here. There’s something about that I like.

A couple summers ago at the cathedral of Dordtrecht I saw a odd little replica miniature of the great Synod of Dort, early 17th century, an entire sanctuary full of Calvinists from all over Europe, nicely arranged, as they were in 1619, to argue frantically–and for years, actually–about the hefty differences between election and free will.  I knew the story, but what I didn’t know and what the display amply showed was that all those delegates–I’m not kidding!–wore beaver hats, every last one of them.

Not long after, those very beaver hats, a true fashion statement in Europe, sent French trappers all over the Upper Midwest.

So who knows?  Long, long ago, some francophone mountain man might have stopped and set camp right here where the Floyd River once long ago decided to take a sharp right hand turn on its wily course to the Missouri. Right here, once upon a time, when buffalo still roamed, that French trapper might have stood just exactly where I did yesterday and figured he could get himself a hide or two out of this sweet river bend.  Maybe he wasn’t French.  Maybe he was Yankton Sioux, looking for pelts to trade to the Frenchman.

The world has changed here immensely. This year, the harvest is almost completely in, almost a month early. The fields are bare naked all around.

But I rather like the fact that just up river a piece from the place where we live, a gang of beavers is still around, busy as beavers always are, backing up a goodly chunk of river that’s become much deeper than the trickle they send merrily downstream.  Look here for yourself. All that hard work is purposeful.

They’re still here. I don’t know they paid much attention to the debate.  The local comm company doesn’t even bring cable out into the country, so these folks would have to have Direct TV and I saw none of those gray receivers in the long grass. Of course, the Floyd River beavers have already seen a lot in their time–the coming of the white man, floods and drought, maybe even an ox-bow or two or three. What’s another debate? another election?

And they’re still here. Look for yourself. They’re still doing what beavers do, what they’ve always done.