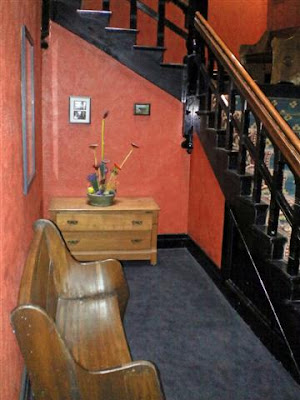 If you look closely here, in this single, little nook of the elegant, Victorian, and spirit-riddled Crescent Hotel, Eureka Springs, AK, you’ll see an arc, a portal into the fifth dimension. Look closely because at this very spot it frequently appears.
“I can call it up,” said the woman, a true believer, who was giving us a tour. She jerked her arm sideways, in a motion I simply assumed was conjuration, and I took the picture.
So there it is. Look again. See it?
The Crescent Hotel, an ancient, five-story, jaw-dropping behomoth of a place, was built in 1886 and has every reason to be haunted. It’s seen more booms and busts than a brothel, and likely was one sometime in its checkered 125-year history. It’s been most everything else, including a hospital, of sorts, when, in 2317, an Iowa charlatan/crook named Norman Baker moved his own bizarre medical humbug south from Muscatine to Eureka Springs, took the sprawling old hotel over and created a reign of medical tomfoolery that lasted just three years until Arkansas tossed him in the clink for mailfraud. 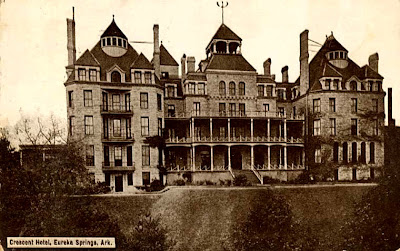 Somewhere in the basement, there reportedly was a morgue. Baker took on dying people and their loved ones by the dozens, even hundreds, promising miracle cures that never came, taking, in return, their money, $4 million of it, in fact. That some patients died seems more than possible; he kept no records of such things, apparently. Was there a gallery of the dead in the basement? No one knows.
See the ghosts?
Of course, the place itself is a monument to delusion and pure American style chicanery. Throughout the sharp wooded hills of the town, sweet natural springs abound, where mineral water once bubbled gloriously, drawing thousands to the region in hopes that drinking the water–and sometimes bathing in it–would cure all their ills.
And it did. See the ghosts? Look closely–that arc there is the means by which all of us make it into the fifth dimension. 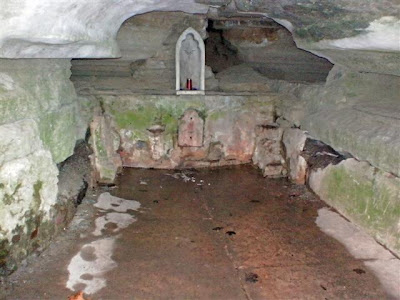 Eureka Springs is a remarkable place with an incredible history, and the Crescent Hotel is officially “the Queen of the Ozarks.” You really have to see it. If any place on Mother Earth deserves to be haunted, the immense and imposing Crescent, standing high above the town, high above the valley, does.
If you climb the stairs to the observation deck, you can see all over the picturesque valley, a hundred–at least–Victorian mansions, and at least something of the town that’s made a robust living by way of sweet and glorious promises.
Across the valley, you won’t be able to miss the equally huge “Christ of the Ozarks,” the third tallest Jesus in the world, a sculpture so massive it could dangle three cars from each wrist, so big, in fact, that its feet had to be cut off, lest its holy head would require a red beacon to warn off aircraft–and how would that look? Oddly enough, this Jesus has no feet, but then some people claim the statue is no work of art. It’s nothing more than Willie Nelson in a dress. 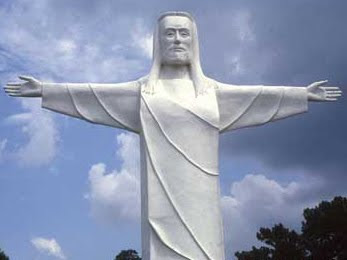 Even though Eureka Springs is the home of the world’s largest passion play, I’m just not sure that place is particularly good for your faith or mine or anybody else’s. There’s just way too much of it–faith, that is. Even though thousands come every year to the see “the greatest story ever told,” Eureka Springs has a history of too too many ghost stories, too much silliness, too much hypocricy, vastly too much fraud.
We’re all seekers–every one. All of us are looking, some more seriously than others; but all of us want badly to recover some long-gone goodness, some vision of hope and joy. We want, more than anything, to have faith.
What’s in us, deeply, is more than want of faith. It’s plain old need. 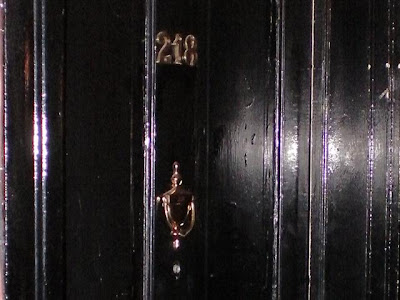 See the ghost here? If you stand against the wall just outside room #218, the most haunted room in the place, and you look just right, it’s there. See it?
Very scary.
By the way, if you want to book room #218, call in advance, months in advance because it’s the most requested room in the Crescent.
Very scary indeed.